Impressions of the City


The Ashcan School of Robert Henri and his circle often get credit for being the first artists to take the American urban scene as a subject for fine art in a modern style. But decades before they went in that direction, Childe Hassam, one of the most influential early American Impressionist painters, painted his impressions of the American city in the new style. Born October 17, 1859 in Boston, Massachusetts, Hassam painted many scenes of his hometown such as Rainy Day, Columbus Avenue, Boston (above, from 1885). Using the effect of a gray, rainy day to the fullest, Hassam captures the look and feel of Victorian Era New England with the horse-driven carriages on cobblestone streets and the high-necked collars of women’s dresses as they hurry their children home and out of the rain. Just as the French Impressionists came to grips with the urban landscape and the idea of progress, Hassam painted the world he knew best—not the rural setting so often identified with Impressionism but the urban setting of his childhood and early career. 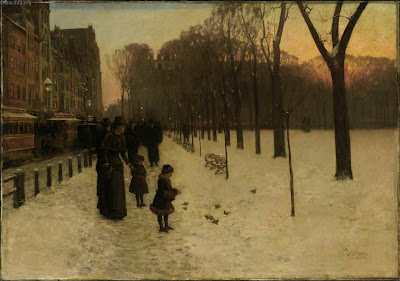 In Boston Common at Twilight (above, from 1885-1886), Hassam again shows mothers with their children walking in the city. Instead of rain, Hassam chooses to bathe the figures in warm twilight. Silhouetted darkly against the white snow blanketing the ground, the pedestrians seem as bare and simple as the trees that extend into the distance. A little girl feeds birds in Boston Common, one of the few oases of nature in the larger urban jungle that Boston was becoming as it neared the turn of the century. Like Paris after the makeover by Baron Georges-Eugène Haussmann, American cities such as Boston faced the new tension of maintaining green spaces as an antidote to the contagion of sprawling progress. The little girl feeding the desperate birds struggling to survive in the cold winter landscape may symbolize the efforts of artists such as Hassam and other lovers of nature to keep these brief interludes of green alive in the face of the brick and mortar invasion. 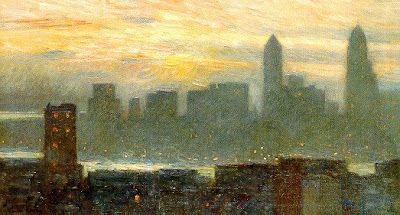 Hassam’s Manhattan's Misty Sunset (above, from 1911) seems like a painted valentine to the city on a par with Woody Allen’s cinematic tribute Manhattan. The Ashcan artists sometimes approach this level of beauty in their depictions of the city, but their greater devotion to the reality of the everyday existence of the city dweller usually trumps any “purity” of beauty. When people appear in Hassam’s works, they usually don’t play a very big part. It seems as if they’re just film extras passing through. In this way Hassam’s work looks much like that of Edward Hopper, except that the beauty of Hopper’s works is more of a terrible beauty full of loneliness and isolation. Looking at Hassam’s Manhattan’s Misty Sunset, you don’t see the people but you can feel them there, sharing in the beauty of the moment from the windows of their dwellings—a community. In that sense, Hassam is eminently Victorian in his belief in shared community values, whereas Hopper is eminently modern in his disillusioned view of such values. The city in Hassam’s eyes seems pure nostalgia to us now, but it was very, very real to him at the time.