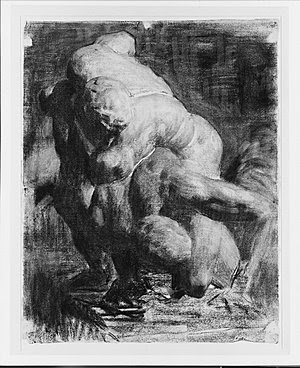 Of all the “villains” in art history, Thomas Anshutz’s name rings with especially sinister tone for me for his betrayal of his mentor, Thomas Eakins. Born October 5, 1851, Anshutz helped orchestrate the 1886 dismissal of Eakins from his teaching position at the PAFA by handing over to school authorities nude photographs Anshutz had helped Eakins take. (Sidney Kirkpatrick’s The Revenge of Thomas Eakins argues the case against Anshutz in full.) In the undated charcoal drawing Two Male Figures Wrestling (above), Anshutz puts into practice the long hours he spent studying the male nude beside Eakins. In some ways it also illustrates the struggle between the two artists for supremacy. Anshutz stepped into Eakins position shortly after the dismissal and became one of the most accomplished teachers of the period, counting artists such as Robert Henri, George Luks, William Glackens, John Sloan, Everett Shinn, Charles Demuth, John Marin, and Charles Sheeler among his long list of students. Anshutz even eventually assumed the role of director of the PAFA as the disgraced Eakins left teaching entirely and languished in relative obscurity until his death. Eakins never spoke to Anshutz after his dismissal, perhaps knowing who and how he was betrayed but taking that secret to the grave rather than attack perhaps his finest student and harm his young family. 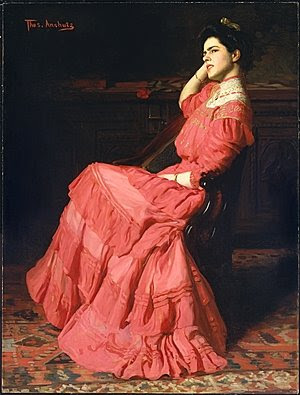 You can never argue with Anshutz’s talent. In a series of bravura portraits of young women in fancy dress, including A Rose (above, from 1907), Anshutz combined the technique he learned from Eakins with the softer, prettified style of John Singer Sargent that sold well at the time. In the expression of the young woman, looking pensively off into the distance, you can see an echo of the typical Eakins-esque psychological touch found so often in his portraits. That deep “mind-reading” often marred portraits for the sitters, but Anshutz avoids Eakins’ marketing error in rendering the fabric of the dress beautifully while keeping the woman’s eyes just intelligent enough to flatter but not enough to distract. In such pretty portraits Anshutz betrays much of Eakins’ philosophy, going for the easier, more marketable picture than something deeper. Perhaps Anshutz didn’t share Eakins’ intellectual depth, or maybe he was jealous that he could never match it. 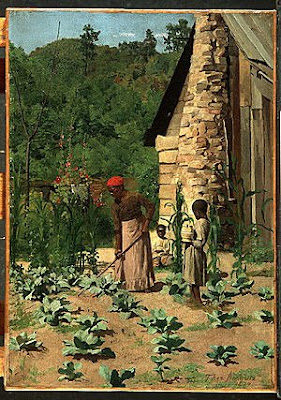 I found myself recently flipping through a book on the Reconstruction period in America and found myself stunned by seeing the name "Anshutz" beside a work titled The Way They Live (above, from 1879) depicting the hard life of African-American sharecroppers after the abolition of slavery. Anshutz’s most famous work, 1880’s The Ironworkers’ Noontime, shows white American factory workers on break from their labors. Anshutz painted both works while still under Eakins’ wing, apparently trying to find the same socially relevant subjects that Eakins found in the worlds of sports and science. Looking at The Way They Live made me wonder at what could have been for Anshutz and Eakins if their relationship had played out differently. For most art history people, Anshutz remains a one-hit wonder for The Ironworkers’ Noontime notable for his instruction of a whole generation of American artists. For me, however, Anshutz remains an enigma—the greatest student of one of America’s greatest artists who put his career before his art and before the bond of friendship between himself and his mentor.