The Uses of Enchantment


Of all the things that we don’t know about Johannes Vermeer, the date of his birth seems inconsequential. Baptized October 31, 1632, Vermeer lived a quiet life devoted to his art, earned the respect of his fellow artists, and probably had no clue of the influence his work would have centuries later. A popular novel and a popular film based on that novel have made Vermeer’s Girl with a Pearl Earring (above, from 1665) almost as unrecoverable as an actual painting as the Mona Lisa itself, the grand dame of overexposure. If it were possible to look at Girl with a Pearl Earring with fresh eyes, you might see again the incredibly warm expression in the young woman’s eyes or the heartbreaking brilliance of the highlight on the pearl earring, perhaps the single most famous highlight in Western art today. Modern audiences consume Vermeer like any other commodity, barely chewing and tasting the full flavor of his art before greedily swallowing. More than any other artist, Vermeer seems a creation of a time other than his own, an artist who had to wait more than two centuries to rise to the top echelon of the art history ranks. If you asked someone on the street in the 1700s if they’d ever heard of Vermeer, you’d get a blank stare back. Today, speak Vermeer’s name and you’re most likely to hear something like, “That movie with Scarlett Johansson!” 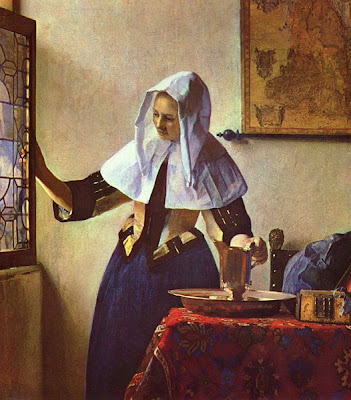 It’s truly amazing how varied the influence of Vermeer’s painting has been. Vermeer seems almost written into our cultural DNA today. When I first saw the film Black Narcissus and that beautiful opening scene of the nun standing in the light by a window, I had a flashback to Vermeer’s Woman with a Water Jug (above, from 1660-1662). My suspicion was confirmed later when I read that the filmmakers consciously copied Vermeer in that scene and alluded to him and other artists throughout the film. In Art of the Everyday: Dutch Painting and the Realist Novel (my review here), Ruth Bernard Yeazell explains how Marcel Proust obsessed about the tiny details and intricacy of Vermeer’s painting and saw such tiny works as a template for his mammoth exploration of minutiae, À la recherche du temps perdu. Yeazell doesn’t get into the finer points of Proust’s commandeering of the philosophy of Henri Bergson in the context of Vermeer, but you can see how that philosopher’s idea of the plasticity of time finds concrete form in Vermeer’s paintings, which seem suspended in time across the centuries, and how Proust easily connected the artist and the philosopher in his writing. 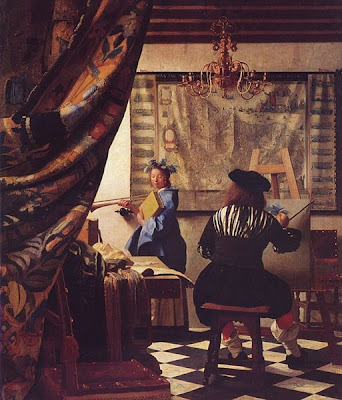 Of course, not every lover of Vermeer has been so refined and philosophical. One of the largest paintings Vermeer ever painted, The Allegory of Painting (above, from 1666-1667), remained in Vermeer’s possession until his death, leading many to believe it was one of his favorites. The view of the artist’s back tantalizes us with an almost self-portrait. When Vermeer shot to the top of the charts in the art world, the Nazis began their plot to rule the globe. As European countries fell before the Nazi war machine, Adolf Hitler and Hermann Goering competed to acquire the greatest art treasures, with Goering stepping aside for the boss in most cases. Hitler “bought” The Allegory of Painting after The Netherlands surrendered and crowed over the latest prize for his growing collection. Fortunately, the painting survived the war and allied forces recovered it from the salt mine it which it had been hidden for safety. Amazingly, Austria still owns the painting thanks to a court ruling that the Dutch seller agreed to sell to Hitler “voluntarily.” From Proust to Hitler to Scarlett Johansson, love of Vermeer’s art has made strange bedfellows over the course of the last century and will undoubtedly lead to even stranger tales as we continue to fill in the blanks of Vermeer’s life story with strange stories of our own.
Posted by Bob at 12:02 AM

Thank you for this post. I had no idea of Proust's thinking about Vermeer. I don't think that Vermeer is the person in Allegory of Painting though because he painting without sketching or outline on the canvas.

I'm so glad I found your blog!
I feel home and with a lot to learn.
Great!
Ana

Yippee for a blogger writing about art! Double yippee. I chanced on your blog when looking through Google images for a Cellini. Lichtenstein appeared (huh?) and then I was reading about Vermeer.

I do have one quibble with this entry. I wonder if you didn't credit the book and movie, Girl With a ... too much. It wasn't a blockbuster and Vermeer didn't suddenly appear in museums after that. Let me put it this way. One afternoon before Girl With a ... book or movie appeared I was at the Met in N.Y.C. where I heard, "The Vermeers! They're back!" Some had been loaned out for an exhibit.

Museums struggle to stay alive, or so they say, anyway, but they thrive. I stood in line for the Philly Art Museum in February this year.