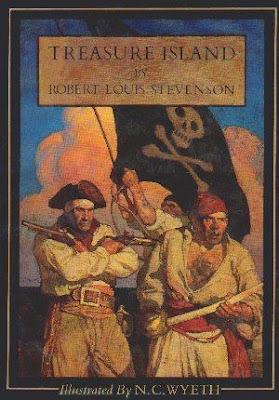 When N.C. Wyeth took an assignment to illustrate a book, he read the book intently from cover to cover. Born October 22, 1882, Wyeth searched in his reading for those scenes that the author had only barely described, taking those moments as his opportunity to stamp his own vision on the work. Wyeth illustrated 112 books, including Robert Louis Stevenson’s Treasure Island (cover image above, from 1911). Unlike most illustrators, Wyeth painted large oil paintings that publishing companies reproduced on a smaller scale for the books. It was if Wyeth couldn’t bring himself to miniaturize the works of his imagination, even knowing they’d eventually be mass distributed that way. Born and raised in New England, Wyeth reveled in the region’s literary tradition of Ralph Waldo Emerson, Henry David Thoreau, and others. Wyeth’s literature-formed visual imagination made him the foremost illustrator of great, imaginative (too often what we call “children’s”) books of his time. 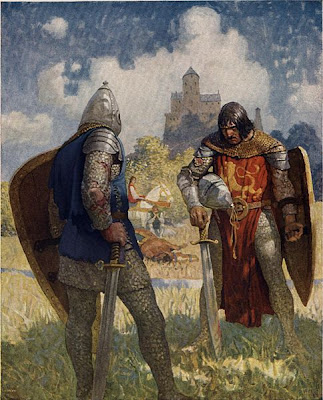 Wyeth left the comforts of New England in 1902 to study under Howard Pyle, often deemed the father of American illustration for teaching a whole generation of great illustrators. Pyle loved the legends of King Arthur and inflamed Wyeth’s interest in that subject. In 1922, Wyeth illustrated The Boy’s King Arthur (an illustration from which, above). "I am Sir Launcelot du Lake, King Ban's son of Benwick, and knight of the Round Table," Launcelot says to the swordsman before him in the scene Wyeth chooses to show the warrior bloodied but not beaten. Wyeth filled his Chadds Ford, Pennsylvania studio with costumes and props to place on models while painting such scenes. Wyeth’s children often borrowed those costumes and props and played knights, cowboys, Indians, and other characters in the woods surrounding their home. Nobody played pretend in the Wyeth family like the sickly son, Andrew. 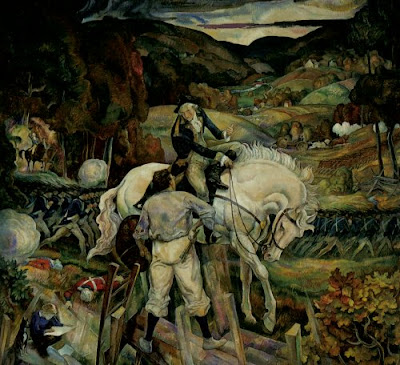 N.C. Wyeth’s greatest legacy in the history of art may be his children and grandchildren. Andrew has earned a place in the upper tier of American painters of the twentieth century. Jamie Wyeth, N.C.’s grandson, stands among the great painters of his time. Even Wyeth’s daughters find a place among the superior female painters of their era. Perhaps my favorite N.C. painting is his work In a Dream I Met General Washington (above, from 1930). N.C. paints himself painting a mural of George Washington leading his troops when the mural suddenly comes to life and addresses the artist. It’s a beautiful depiction of just how immediate and alive such scenes could be for N.C. Even more touching is how N.C. places his young, 13-year-old son Andrew in the corner of the painting, sketching the dream sequence playing out before him. In this painting we see the past playing out before N.C., the artist of the present, as Andrew, the artist of the future, picks up the torch passed on to him by his father. Sadly, N.C. always denied the greatness of his illustrations. "Painting and illustration cannot be mixed—one cannot merge from one into the other,” Wyeth lamented. In the few years before his accidental death in 1945, N.C. tried to find a new, non-illustration style of easel painting, but never could recapture the verve of his illustration work. Although N.C. Wyeth denied the fine art value of his illustrations, there’s no denying the beauty and imaginativeness of them today.