A Gentleman of Verona 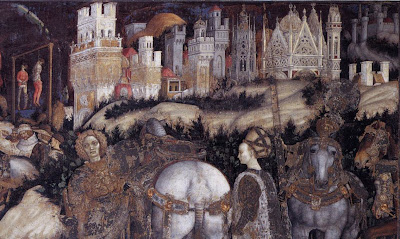 When he was alive, Pisanello drew comparisons to Cimabue from just a few centuries before and to Phidias and Praxiteles from ancient times. In death, which came on October 8, 1455, many works by Pisanello sadly became ascribed to Piero della Francesca, Albrecht Dürer, Leonardo da Vinci, and other masters of close detail. Born 1395, Pisanello found himself historically torn between the last moments of the Quattrocento and International Gothic and the dawn of the early Renaissance. In such works as St. George and the Princess (above, detail, from 1436-1438), Pisanello gets Gothic in painting dragons slain and traitors to the crown hanged in the distance, but the powerful foreshortening of the two horses, one seen from the rear and the other in full face, looks forward to the Renaissance’s fascination with perspectival trickery and illusory depth. Sadly, many of Pisanello’s paintings no longer exist. Even this fresco of St. George and the Princess no longer retains the gold and silver leaf once applied to the surface, which made the painting truly shine. In the distance, behind the figures in the foreground, stands a Gothic church painted meticulously to show every fine filigreed architectural detail. Pisanello based that town in the distance on his native Verona. Born either too early or too late, Pisanello still managed to make the best of the situation. 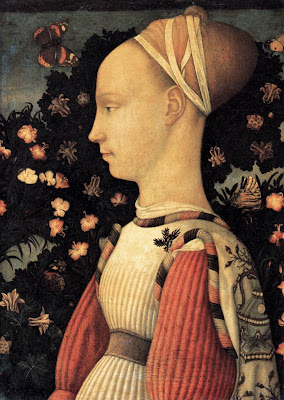 Sometimes it seems like Pisanello sits on a stylistic fence and other times it seems like he clearly falls off it to once side. In Portrait of a Princess of the House of Este (above, from 1436-1438), Pisanello clearly falls onto the Gothic/Quattrocento side. The flat rendering of this princess’ profile forgets entirely the world of perspective and depth seen in other works Pisanello paints at the same time. Perhaps the princess wanted a portrait that looked like the other portraits she had seen and Pisanello complied, toning down his Renaissance “modernism” to please the patron. The flowers and butterflies providing a natural backdrop to the princess in profile lean toward the Renaissance in how closely they follow nature realistically, but the overall flattening effect turns them back into decorative wallpaper rather than a living, growing garden.

Through both painted and sculpted portraits, Pisanello developed a cozy relationship with the house of Este, the nearby ruling family. The cultured Leonello d'Este patronized not only Pisanello but many other artists. When Leonello looked to get married, Pisanello struck the beautiful Medal of Leonello d'Este (obverse and reverse) (above, from 1444). On the front, Leonello’s flattened profile advertises the strength of his features. On the reverse, Pisanello portrays the change in Leonello’s soul from fighter to lover. A lion stands in for Leo as Cupid tames him, just as Leonello’s love for his new bride will usher in a new era of good feelings in the land. Whereas the front is pure old-school Quattrocento, the reverse points toward the humanism of the Renaissance just on the horizon for Italy and the world as the brutish days of the Middle Ages neared their end. Leonello proudly handed out these medals as a type of calling card to advertise what kind of man and ruler he wanted to be. Pisanello actually signs the reverse image with his name, perhaps indicating which side of the stylistic coin he wanted to be.