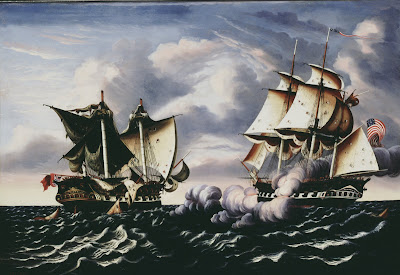 How do you write about a painter about whom almost nothing is known? Can the work absent the biography provide us with satisfying answers? Kathleen A. Foster tackles these challenges in Thomas Chambers: American Marine and Landscape Painter, 1808-1869, the companion publication to the exhibition currently at the Philadelphia Museum of Art. “The distinctiveness of [Chambers’] style as a painter, matched inversely by the vagueness of his biography, has made him a tantalizing figure,” Foster writes of the artist whom she has pursued since the 1990s, “at once one of the most widely collected American ‘folk’ landscape painters and yet one of the least studied and understood.” Putting flesh on the skeletal framework of what we know about Chambers through relentless sleuthing and an encyclopedic examination of what it meant to be a working artist in nineteenth century America, Foster schools readers not only on what kind of artist Chambers most likely was but also on what it takes to recover such lost souls from the depths of murky art history. Chambers’ works, such as his Capture of the H.B.M. Frigate Macedonian by U.S. Frigate United States, October 25, 1812 (above, from 1852), captivate us with their otherness and strange modernity and draw us in to ask more. Foster provides more answers than we should expect. 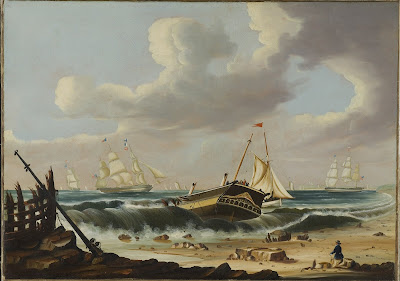 Foster begins her manhunt in Whitby, England, Chambers’ birthplace, where his brother George initiated him into the world of being a working artist taking on all manner of jobs to make a living. The theatrical and panoramic paintings of popular English entertainment of the time influenced Thomas and impressed on him the need to market your wares properly to survive as an artist. Chambers arrived in the United States in 1832, setting up shop in New Orleans for a few years. Moving to New York City, Chambers advertised himself in a local paper as “Thomas Chambers, Marine and Landscape Painter” ready to perform “Fancy Painting of every description done to order.” Chambers painted everything from furniture and signs to fine art for the home, including works such as Rockaway Beach, New York, with the Wreck of the Ship Bristol (above, circa 1837-1840), which recounts the story of a shipwreck that would have been familiar to his local audience. “With the practical outlook of a mariner,” Foster writes, “he includes the workaday salvage of the ship by the wreckers who have pulled alongside… [yet] within a romantic structure in which a bystander contemplates, under sunny skies, the aftermath of the most recent episode in a timeless cycle of tragedy and recovery.” This tension between merchandising and higher artistic aspirations energizes much of Chambers’ art as he continually pursued a buying audience, often physically, as shown by moves from New York City to Baltimore, Boston, Albany, and New York City, again, before returning to England in his final years. Foster identifies Chambers’ contemporary audience as “prosperous, bourgeois householders attentive to the latest urban style… evidently attracted by a novel, fashionable, prestigious, and cosmopolitan item: the original framed oil painting of a landscape or marine subject.” Upwardly mobile Americans looking to acquire the trappings of success sought out artists such as Chambers, who supplied them with an affordable touch of class. Chambers, Foster believes, was “the first American painter to bring professional landscape and marine easel painting to an audience beyond the metropolitan elite,” thus democratizing art for the still-young democracy. 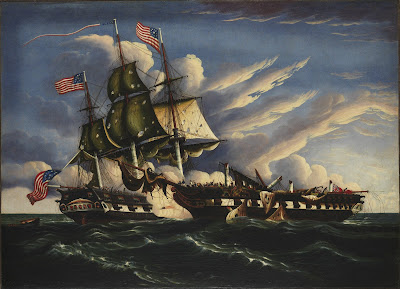 Capitalizing on the continued interest in the War of 1812, Chambers painted multiple versions of The Constitution and the Guerrière (above, from circa 1840-1850), the battle that made “Old Ironsides” a household name. Chambers painted several different naval conflicts from that war, always looking to open up new markets or fulfill new commissions. Chambers played to the wishes of his audience and his own tastes rather than slavishly copy reality. “Sailors might have been disdainful, considering the nonsensical signal flags, out-of-scale vessels, and perilous courses depicted,” Foster muses, “but perhaps they enjoyed [Chambers’] spirit,” as adventuresome in paint as the events he depicted. To expect properly rendered ship’s rigging from Chambers work seems as silly as to expect anatomically correct animals in the work of Edward Hicks, an artist from the generation just before Chambers’. N.C. Wyeth actually owned two naval battle scenes by Chambers, proving that their inner spirit continued to entrance kindred spirits even a century later. Although not truly an illustrator like Wyeth, Chambers scoured popular magazines and newspapers for subjects for his brush, illustrating the images that were fresh in the mind of his buying audience. 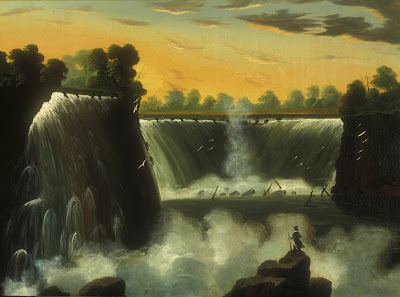 Although Chambers painted both marine and landscape scenes, he clearly identified himself as a marine painter. The few works that bear his signature are marine paintings. Chambers might actually have gone so far as to create aliases under which he could sell his landscapes. Another factor that may have led Chambers not to place his name on such works as Niagara Falls from the American Side (above, circa 1843-1852) may have been his “borrowing” of such subjects from prints. Foster sees the fact that Chambers never copied one of Thomas Cole’s compositions as a sign that he respected the older artist’s work too much to mimic it. Although Chambers grew up in an art world that viewed such copying as a long-accepted practice, he practiced long enough to reach a time when such copying was looked down upon. “The issue of originality defines a sea change in that world during [Chambers’] lifetime that would forever disqualify him as a so-called fine artist in the eyes of his contemporaries,” Foster writes, explaining in part how Chambers fell into obscurity over time until his rediscovery in the middle of the twentieth century. 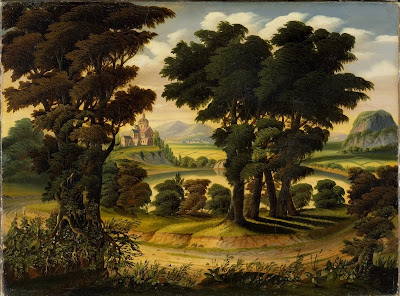 In the late 1930s, art dealers Albert Duveen and Norman Hirschl discovered a signed work by Chambers that led them to connect that one work to similarly painted works that had also emerged around that time. In 1942, they exhibited at the Macbeth Gallery in New York City 18 works attributed to Chambers, hailing him as the “First American Modern” and “The American Rousseau” for his unique style so similar to the primitivism valued by modern art movements. Just as Herman Melville resurfaced as the quintessential American novelist in the 1920s, Chambers resurfaces from obscurity as an “authentic American artist” according to critic Thomas Craven and others. Ironically, Foster points out, the “flatness, unnatural color, expressive distortion, abstraction, and simplification” of such works as Landscape with Lake and Monastery [Lake Albano and Castel Gandolfo?] (above, circa 1843-1860) that Chambers’ contemporaries “deemed bad in Chambers’ day… are exactly the traits that… make him a model of liberated individualism and originality” for a modern audience. Foster proceeds to prick this tidy balloon of posthumous acceptance by viewing the modern reading of Chambers as being as much a misreading of his art as the reading of his contemporaries. “Laundered, over time, of the class and guild prejudices that colored the opinions of Chambers’ own contemporaries,” Foster explains, “his work comes to us with nuances of subject matter and context likewise lost, and a measure of nostalgia and condescension added, as we smile over imagined naïve and innocent citizens of the past decorating their fancy parlors.” Foster’s coup de grace arrives in the form of Thomas Kinkade, whom Foster evokes as a possible analogue to the case of Chambers—an artist who played to the taste of his time in his own style despite critical approbation. “[I]f it is useful to call Chambers the ‘First American Modern’ in 1942,” Foster asks, “is it helpful to understand him as the ‘first Thomas Kinkade’?”

One of the finest prose stylists in art history writing today, Kathleen Foster delivers mightily with Thomas Chambers. As shocking as including the “Painter of Light™” in her argument seems, Foster makes it not only provocative but illuminating. Like Chambers’ art itself, Foster easily crosses all strata of culture, high and low, including Walt Disney’s Fantasia and PBS’ Bob “Happy Little Trees” Ross, to give a fully rounded recounting of what Chambers’ life most likely would have been like based on the sketchy evidence that survives. Foster’s presentation of her Sherlock Holmes-ish detective work and deductions are exhaustive without being exhausting, lightened by the twinkling wit of her writing and her impeccable eye for images that illustrate Chambers’ strengths. If you should ever fall into obscurity, pray for someone like Kathleen Foster to pull you out of it. Thomas Chambers recreates a little-understood era in early American art and exhumes an artist both representative of that time and well welcomed in our own.

[Many thanks to the Philadelphia Museum of Art for providing me with a review copy of Kathleen A. Foster’s Thomas Chambers: American Marine and Landscape Painter, 1808-1869 and for the images from the exhibition.]

I amazed..have just discovered that Thomas Chambers wasmy Great Grandfather...I am almost 78..And am a painter.."What a joyful birthday present and revelation"