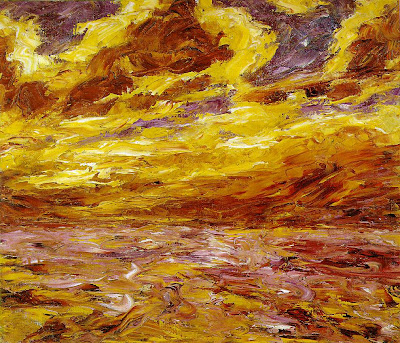 Of all the members of Die Brücke and the entire German Expressionist movement, Emil Nolde worshiped the most at the altar of the church of Vincent Van Gogh. Born August 7, 1867, Nolde worked as a woodcarver until the woodcut prints he created sold well enough for him to study art formally in his early thirties, just when the posthumous Van Gogh craze, fueled by a recent German translation of the unforgettable letters, was at its height. “My aim,” Nolde later said of his art, is “a new evaluation of nature, with the infusion of personal soul and spirit.” Works such as Autumn Sea VII (above, from 1910) show Nolde infusing his “personal soul and spirit” into nature itself in the same way that Van Gogh once did. Although Nolde allowed himself to enter into Expressionist circles (at least for a couple of years), he remained a loner all of his life, much like Van Gogh, always looking for personal communion with nature itself free of all interference. 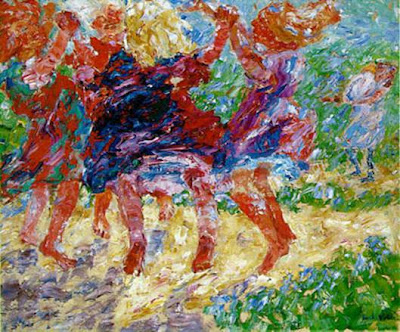 In addition to his Van Gogh-like traits, Nolde shared a love of the exotic with Van Gogh’s one-time companion, Paul Gauguin. In 1913, Nolde and his wife joined a German ethnological expedition to the South Seas, traveling as far as the East Indies. Despite his devout Christian faith, Nolde always found the primal energy of primitive civilizations fascinating. Nolde’s Wildly Dancing Children (above, from 1909) now seems like a prophesy of the images he would paint of dancing natives, who’s sense of sinlessness shook Nolde’s faith while simultaneously igniting his artistic imagination. Whereas Gauguin entered the primitive sphere and felt at home for the first time, Nolde never overcame his sense of alienation but recognized the raw beauty all the same. “Art is exalted above religions and races. Not a single solitary soul these days believes in the religions of the Assyrians, the Egyptians, and the Greeks. And their races are exhausted, crossbred and spoiled,” Nolde once wrote. “Only their art, whenever it was beautiful, stands proud and exalted, rising above all time.” By inches, Nolde’s Christian faith and artistic faith slowly reconciled, at least in his art if not his soul. 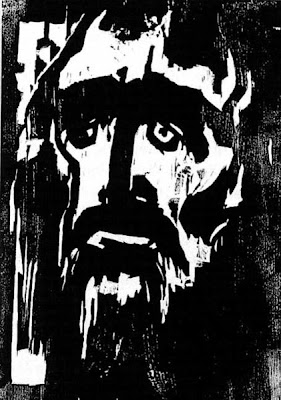 As beautiful as Nolde’s explosively colorful paintings are, none can match up to his devout woodcut titled The Prophet (above, from 1912), his finest single woodcut and perhaps the greatest of all German Expressionist woodcuts—no small achievement considering the many imitators who tried to match Nolde’s artistry. His fervid Christianity led him to break with the Berlin Secession in 1910 and its Jewish president, Max Liebermann. Sadly, Nolde aligned with the “Christian” forces of the Nazi party as early as the 1920s. The Nazis repaid Nolde’s loyalty by placing him on the list of "Degenerate Art," removing his art from German museums, and forbidding him to paint again under penalty of death. Many of the watercolors Nolde painted secretly during the war met a fiery end in allied bombing raids. After the war, Nolde received honors and found his reputation restored, but the taint of his dalliance with the Nazis still hangs over much of his art, robbing it of some of the brilliance it might have had if he had only remained faithful to his true religion of nature and art, “exalted” above all other religions and races.