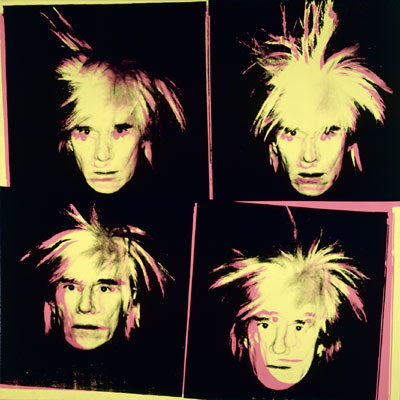 Andy Warhol once said that he was “deeply superficial.” Born August 6, 1928, Warhol spent his entire life proving how superficial even the deepest thoughts really are. Pop Art itself always seemed committed to erasing the lines between high and lowbrow, leveling off everything into some kind of ironic middle. About a year before his death, Warhol created a four-paneled Self-Portrait (above, from 1986) of himself in his trademark shock wig. Warhol silk-screened four photos of himself onto the 6-foot-square canvas slightly out of register, achieving a blurred effect as if he were somehow out of phase with this plane of reality. Warhol never truly got in step with the world, always too ironic and self-conscious to allow himself to participate in the everyday. And when he did function in this reality, he obsessively watched himself functioning, recording every trivial aspect, apparently to emphasize its very triviality. Warhol’s life after he became “Warhol” the brand was like a loop of film playing over and over endlessly. 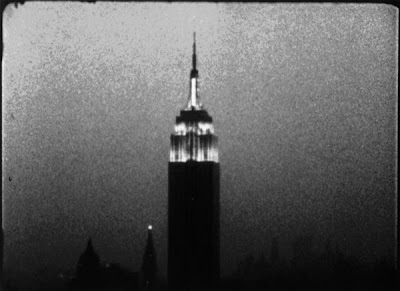 Warhol holds the distinction of creating the most unwatchable film of all time—Empire. On July 25th and 26th, 1964, from 8:06 pm to 2:42 am, Warhol filmed the top of the Empire State Building in real time. (A still from the film, not much different from film itself, appears above.) For eight hours, the sun sets, floodlights go on, and office windows flicker on and off. Warhol refused to allow abridged versions, stressing that the unwatchability of the movie was the point. Only Warhol would create a film with the goal of not having it seen. Awash in eccentricities and surrounding himself in equally unconventional people, Warhol lost touch with the things of this world in the mid-1960s and never found his way back. The one link he maintained with reality seems to be his religious faith. A devout Byzantine Rite Catholic, Warhol attended mass every day, volunteered at homeless shelters (imagine seeing him in the soup line), and created religious artworks not found until after his death. Perhaps Warhol sought the comforts of the next life so strenuously that his life on Earth seemed less real than Heaven. 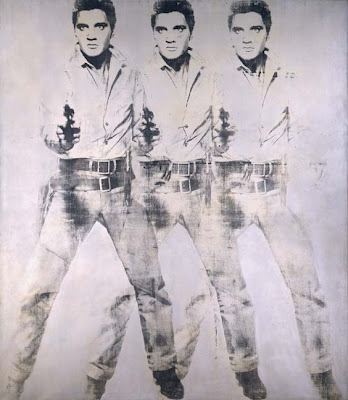 Warhol managed to take the secular figures of American culture and iconize them into saints. Elvis Presley in Warhol’s Triple Elvis (above, from 1963) looks like a medieval triptych all by himself. In Warhol’s eyes, Marilyn Monroe became a modern Madonna, minus the virginity. Warhol didn’t create the American cult of personality, but he gave it hyperbolic visual form. I’d like to think that Warhol shaped his overwrought images with at least a pinch of sarcasm, recognizing how modern media figures served as poor stand-ins for the religious heroes of his faith and the mythic standard-bearers of civilization’s past. Today, any hope of sarcasm or irony seems long dead with no hope of resurrection. Perhaps only an enforced viewing of Empire could break the spell Warhol helped cast. If eight hours of watching nothing happen doesn’t impress on you the banality of modern iconography, nothing will.

Today Garrison Keillor read a poem about Andy from a new book published on his 80th:
http://writersalmanac.publicradio.org/