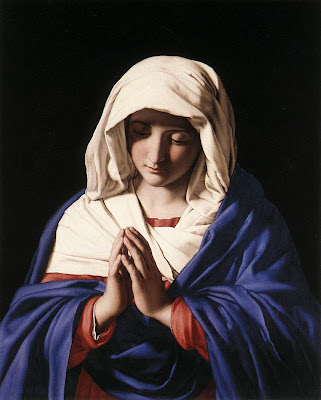 In the late nineteenth century, British critic John Ruskin loved to disparage painters who followed in the footsteps of Raphael, mainly to help bolster his praise of the Pre-Raphaelite Brotherhood. Caught up in the wake of this criticism were artists such as Giovanni Battista Salvi da Sassoferrato, known commonly as simply Il Sassoferrato. Born August 29, 1609, Sassoferrato indeed followed the style of Raphael, but also borrowed freely from other artists such as Albrecht Dürer, Guercino, and even his contemporary Guido Reni. Today, Sassoferrato suffers as much from the residue of Ruskin’s attacks on his over “sweetness” as from modern expectations of originality. For most of his career, Sassoferrato churned out image after image of the Virgin Mary for both private patrons and for public churches as part of the larger Counter-Reformation to win back the hearts of the faithful through stirring art. Fifteen versions of The Virgin in Prayer (above, from 1640 to 1650) still exist, testifying to Sassoferrato’s popularity and productivity. Judged on its originality, The Virgin in Prayer seems lacking. Judged on the quality of its painting, however, Sassoferrato emerges as an artist of great substance. When a Christian looked up from a pew or a sickbed and saw the downcast eyes of The Virgin in Prayer set upon him, Sassoferrato succeeded in creating a believable, warmly human world in which the sacred and the profane could intersect. 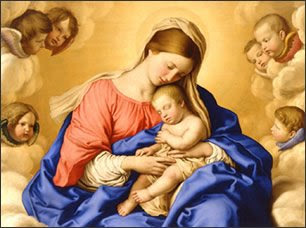 The sheer repetition of Sassoferrato’s output certainly seems off-putting today. We need to see these works through the eyes of the buyer, the maker, and the intended audience, however. The buyers, usually the church, wanted the maximum impact from every image. A small repertoire of images spoke clearest to the illiterate masses. Keep it simple, stupid, we’d say today. The maker, Sassoferrato, would tailor his art to the wishes of the buyer in that patronage-dominated age. The intended audience wanted simple, concise, yet powerful images that tugged upon their heartstrings, such as Sassoferrato’s Madonna and Child with Cherubs (above, from 1650). A realistic landscape or elaborate architecture behind the figures would distract the viewer from focusing on the human (and divine) relationship of the Virgin and the baby Jesus. The cherubs, which inspire eye-rolling today, would have helped set the mood without diminishing the intended effect. What sets Sassoferrato apart from the run of the mill artist working within this Counter-Revolutionary system is his ability to take such simple elements and do so much, rendering the faces of the figures with convincing humanity while bathing the entire scene with a golden, heavenly glow. 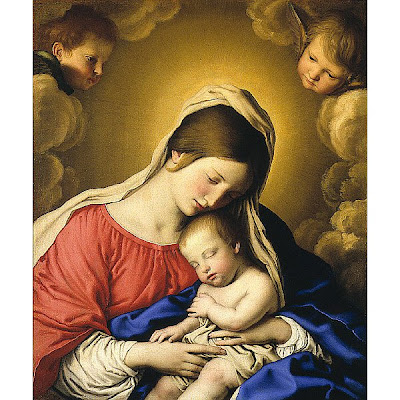 The Madonna and Child shown above (from the 1650s) demonstrates how Sassoferrato could take the same theme as The Madonna and Child with Cherubs and make it slightly different while maintaining the full message. Sassoferrato closes in tighter on the Mother and Child, emphasizing their humanity in cinematic close-up. The cherubs in this picture seem even more superfluous. The same golden light bathes the figures, but seems even warmer in showing the gentle embrace of a mother and her sleeping infant. To criticize Sassoferrato and painters of his generation for saccharine subject matter is to miss the point of their art. Judging such works and such artists on their own terms rather than our own allows us to recognize their skill and imaginativeness regardless of time and place.