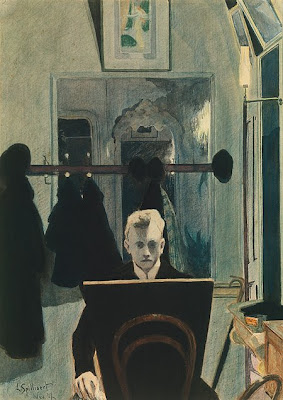 In 1907, twenty-six-year-old Leon Spilliaert set out to paint a series of self-portraits in his quest to discover exactly what kind of artist he wished to become. In the 1907 Self-Portrait (above), Spilliaert places a mirror behind himself, which captures the mirror he places in front of himself to reflect his own image back to himself to be painted. The reflections thus ping-pong back and forth between the two mirrors ad infinitum. Everything else within the self-portrait suggests everyday life, but those two dueling mirrors question what it is real and what is an illusion and refuse to stop. Born July 31, 1881, Spilliaert shared the same intellectual bent that many of the other Symbolist artists, falling in love with mind-bending writers such as Edgar Allan Poe to the point of creating illustrations to those visionary texts. Like his slightly older Belgian contemporary, James Ensor, Spilliaert struggled with issues of identity, the central question of his entire interrogation of reality. In this self-portrait and others, you learn little about Spilliaert the man but much about Spilliaert the artist he was becoming. 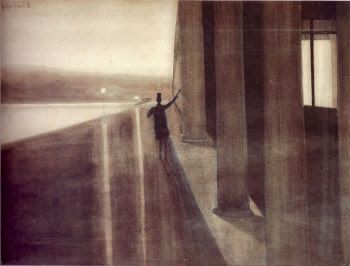 Constrained by ill health, Spilliaert lived reclusively much of his life, never really becoming part of any art school or movement in terms of interaction with other artists. Spilliaert seems to have lived mainly in his own head. Although he painted in color, black crayon and charcoal provided him with the most expressive means of depicting the pictures in his mind’s eye. Night (above, from 1908) could easily belong to several Poe short stories. The single figure seems to stagger through the dark street as if the blackness of the night weighed down on his shoulders. Whereas Edvard Munch and others achieved such psychological effects through striking color, Spilliaert reproduces the multitude of mental “grays,” as opposed to the blacks and whites of rationality, going through the man’s mind. The loneliness of this figure brings to mind the loneliness of a character in a film by Alfred Hitchcock, struggling to understand a world he thought he understood suddenly transformed into something strange and menacing.

In Vertigo, Magic Staircase (above, from 1908), Spilliaert comes close to the fantastic near-Surrealist brand of Symbolism of Odilon Redon. Redon never hesitated to make giant eyeballs walk on spidery limbs or indulge other nightmares, but Spilliaert maintained a relatively realistic approach throughout his career, finding that reality slightly askew was more frightening than any unreal vision. You can almost feel yourself stand with the lone woman and lose your balance on the uncanny steps, poised to plunge down. The woman’s scarves trail off like smoke trails in the high winds, which add yet another element of peril. Behind the black veil covering her face, you can sense her eyes imploring you to help her. I look at Spilliaert’s art and sense a call from the artist pleading for help in understanding his world and himself. Trapped in a hall of mirrors, Spilliaert never seems confident in finding which reflection is truly his own.