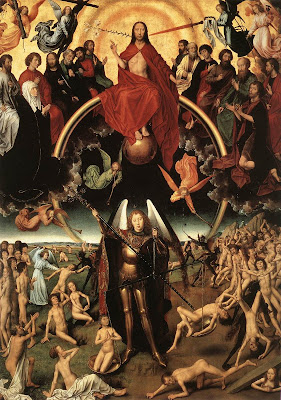 It’s always tough following a great opening act. In fifteenth-century Netherlandish art, Hans Memling had to follow on the heels of Jan van Eyck and Rogier van der Weyden, two of the greatest early innovators in painting. Before he died on August 11, 1494 (born sometime after 1430), Memling created a large body of beautiful religious works full of imagination, such as the central panel of his Last Judgment Triptych (above, from 1467-1471). Christ returns on the Day of Judgment seated upon a rainbow (interestingly, and accurately, depicted as a ring) while Saint Michael weighs the scales and separates the saved from the damned below. The heavenly host gathered around the Savior and the risen dead scattered about the armored angel form another larger circle, creating a rippling effect with Christ at the center. Unfortunately, Memling copied much of this composition from one of van der Weyden’s altarpieces. Memling may have studied under van der Weyden, so imitation doesn’t seem that outrageous. However, because of modern expectations of originality, Memling stands accused of unoriginality, a charge he never faced in life. 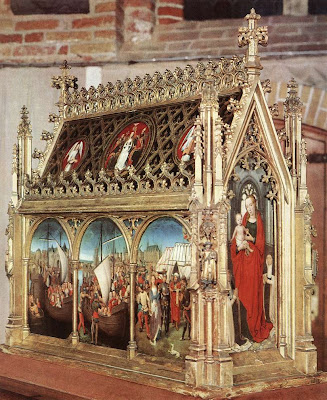 In fact, during his life, Memling enjoyed a large and wide reputation. The Medici commissioned The Last Judgment Triptych shown above, although events conspired against its delivery to Italy. Wealthy patrons from as far away as England paid Memling handsomely to create works for their churches, always with an eye on getting the best painters to include their images in the works so that everyone knew who was footing the bill. But not all of Memling’s religious works were for-hire devotionals. In 1489, Memling completed his Saint Ursula Shrine (above, from 1489), a gilded wooden reliquary said to hold personal artifacts of the saint herself. The paintings on the sides tell the tale of Saint Ursula, daughter of a Christian king who agreed to marry a pagan prince only if he converted. No patrons appear anywhere on the work. This reliquary appeared before the public only on Saint Ursula’s feast day each year, making it a rare treasure made more for piety than praise.

But even Saint Ursula’s Shrine may have been based on another, perhaps solid gold model. Memling, however, did sometimes look forward rather than back. In the front panels of his Triptych of Earthly Vanity and Divine Salvation (above, from 1485), Memling sexes up the vanitas theme that would become commonplace a century later. An alluring nude appears sandwiched between skeletal Death and bedeviled Hell. She holds a mirror up to her face, enjoying the view. The Devil to her left, with a face leering from its torso, seems like something out of Hieronymus Bosch until you realize that Bosch comes after Memling. Did Bosch see such works by Memling or were such innovations simply “in the air” at the time? In a period in which attribution alone is difficult, influence seems even sketchier. The monster eating the damned beneath the two-faced devil may have risen up from Memling’s imagination whole or been just another “borrowed” idea from contemporaries. The sexuality of the central nude, however, seems chronologically out of place, more modern than anything else, albeit with the wide-hipped conventions of beauty of the time. Perhaps our modern, vainer times make Memling’s vain lady seem strikingly one of us. Memling suffers from the expectations of later times, doomed to play second banana to his predecessors and unappreciated for the variations he played on those themes.