Around Christmastime 1894, Alfons Mucha dropped into a Parisian print shop and found his life changed forever. Someone from the Theatre de la Renaissance confronted the print shop owner with a sudden demand for an advertising poster for the new play Gismonda starring famed actress Sarah Bernhardt. Mucha, seeing the opportunity of a lifetime, interjected that he could deliver the poster in two weeks. Two weeks later, Mucha poster of Sarah Bernhardt as Gismonda (above, from 1894) announced to the world his jaw-dropping talent. Born August 24, 1860, Mucha had lingered in relative obscurity since moving to Paris in 1887 from his native Morovia (now the Czech Republic), but the Gismonda poster soon became the toast of the city. Rivaling graphic artists such as Henri de Toulouse-Lautrec, Mucha soon became one of the most in-demand artists for advertising and caught the eye of the actress herself, who thereafter requested that her image be shaped by Mucha’s eye. 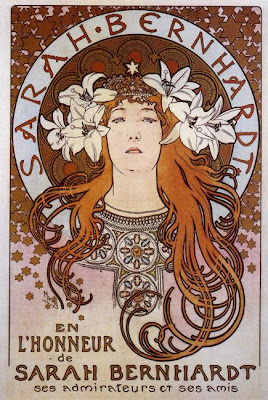 Every year, I buy for Annie calendars of the art of Mucha and John Singer Sargent, two of her favorite artists whom she never tires of seeing grace her office walls. Mucha brings an organic life and explosively blooming color to the style known as Art Nouveau. Aubrey Beardsley helped imagine the Art Nouveau line that makes that style so distinctive, but Mucha brought it to the public’s attention and made it the style of choice like no other artist. Mucha helped sell everything from perfume to chocolates with his images, usually of dreamily beautiful women looking wistfully off into the distance. Mucha’s poster for an event in honor of Sarah Bernhardt (above, from 1896) shows how he could make even hair come alive into a vast swarm of tendrils. I find Mucha’s work so infectiously engaging because of his endless ability to make even the most mundane detail pop with abundance.

Mucha’s work followed Bernhadt as she tore through the classic works of Shakespeare, including Hamlet (above, from 1899), in which she herself played the troubled prince. Although so much of Mucha’s work speaks of beauty and joy, he never lost that Slavic sense of national struggle and pride in that struggle. When his native Czechoslovakia won independence after World War I, Mucha designed the stamps, currency, and government documents for the new nation. Mucha later painted twenty mammoth canvases following the history of the Czech and Slavic people, which he called The Slav Epic and donated to the people of Prague in 1928. Sadly, the same pride that made Mucha literally the painter of his people, made him a target when the Nazis invaded in 1939 and took the aging artist into custody. The shock of the experience quickly led to Mucha’s death. Despite the Nazis’ ban on a state funeral, the Czech people staged a grand farewell to Mucha, a final curtain call for an artist who starred on both the small and the grand stages of history.

Great post. I love Mucha, and think that he has often been unfairly dismissed by modern art historians. I was able to see a current exhibition on him in Madrid and was surprised to find out how good he is at traditional oil painting.