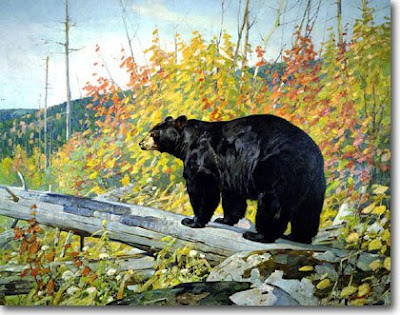 Born in Berlin, Germany on August 18, 1869, Carl Rungius spent much of his youth in the Berlin Zoo, drawing the caged animals pacing back and forth. Like many Germans, he fell in love with the romanticized idea of the American Wild West. It was not until 1894, however, that Rungius finally visted the United States, finding his way to Wyoming to hunt and sketch the animals he hunted. From those face to face encounters, Rungius came away with such stunning wildlife scenes as American Black Bear (above, from 1929), which combines the beauty of the animal itself with the splendor of its natural setting. Rungius found a second home in the Western United States, setting up a winter base in the art world back in New York, but returning each summer to hunt for new subjects. Few artists capture the raw power and majesty of large animals in situ the same way that Rungius does. The same anticipation the hunter feels waiting for the animal to strike pervades Rungius’ art. 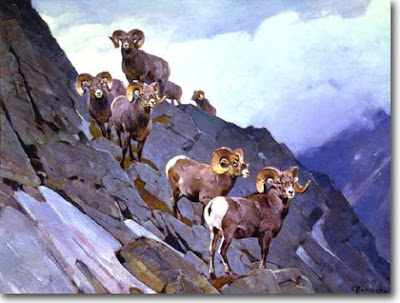 In addition to traveling in America, Rungius ranged up to the Canadian Rocky Mountains, hunting and painting such animals as the bighorn sheep in works such as In the Clouds (above, from 1940). Rungius told one interviewer a story of hunting in the mountains, shooting a large goat, and darting out of the way before the thrashing, dying animal knocked him from his perch to certain death below. Even without the animals, Rungius’ landscapes could stand alone for their realistic depiction of rarely scene spots as the heights of the Canadian Rockies. Although many of the titles of Rungius’ paintings simply bear the names of the animals depicted, Rungius’ often waxed poetic, as he does here with “In the Clouds.” Other titles refer to mountain sheep as “old gentlemen,” illustrating Rungius’ hands-on approach to pursuing and painting these animals. Rungius often travelled alone on his hunts, accentuating the sense of communion with nature as he had only himself to rely upon. Rungius’ rugged individualism helped make him a kindred spirit of these animals who also dealt unassisted with the elements to survive. 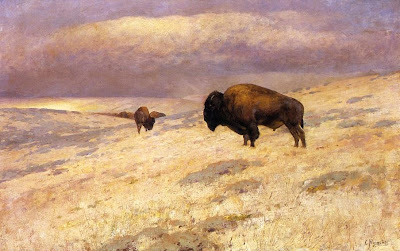 Rungius justly receives credit for helping in the conservation of these animals. Works such as The Last of the Herd (above, from 1900) alerted Americans to the plight of the fast-disappearing American Bison, better known as the American Buffalo. President Theodore Roosevelt’s nascent conservation movement found a powerful visual ally in Rungius’ work. Unfortunately, Runguis had to kill his subjects to paint them so accurately. Rungius would shoot his prey, carry it back to camp, rig it up into a life-like pose with ropes, and sketch at his leisure, drawing on memories of his encounter with the living animal to fill in any gaps in realism. A century earlier, John James Audubon depicted the birds of North America using a similar technique, murdering to dissect the visual essence of nature’s creations. A true outdoorsman, Rungius’ work did more good than ill in the final tally, reminding people then and now of the beauty of nature’s creatures great and small.