Stuck Inside His Own Head 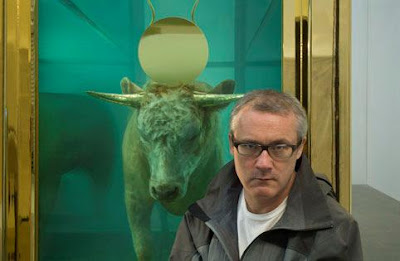 On September 15th and 16th this year, Damien Hirst will attempt to revolutionize the art world—again. At an auction at Sotheby’s Hirst is calling “Beautiful Inside My Head Forever,” Hirst looks to cut dealers out of the art market equation entirely and auction new works directly to the public. (Sotheby’s press release is here.) The prize offering, according to Hirst, will be his Golden Calf (above, with Hirst himself), a bull wearing a solid gold disc on its head and 18-carat gold hooves inside a chamber full of formaldehyde. Hirst hopes to rekindle memories of The Physical Impossibility of Death in the Mind of Someone Living, the fourteen-foot shark he preserved in formaldehyde in 1991, as well as cash in like no other artist in history. Other artists, such as Jeff Koons, have offered new work at auction, but never at anything near the scale of Hirst’s September date at Sotheby’s. Sotheby’s estimates that Hirst’s Golden Calf will sell for between $15.7 $23.6 million USD. Of course, Hirst imagined a big payday for For the Love of God, his diamond encrusted skull sculpture, and that failed miserably, with Hirst himself organizing a group of buyers just to save face. Hirst’s usual dealers, many of whom got roped into the diamond skull buyback fiasco, say publically that they support Hirst in this “groundbreaking” endeavor, but privately express pain over what they feel is a betrayal and a harbinger of things to come. It may be “Beautiful” inside Hirst’s head right now, but in the art world, already suffering from the effects of America’s staggering economy, the picture isn’t nearly as pretty.

The Sotheby auction appears to be stage two in Hirst’s master plan to rule the art world. Stage one was the opening of his Marylebone store and website Other Criteria. The Other Criteria store offers t-shirts (some examples above), postcards, plates, books, and even some artwork all by Hirst or his studio. Other, up-and-coming artists share some shelf space with Hirst’s offerings, but the main marketing plan centers on all things Hirst. Sadly, it is these very up-and-coming artists hurt the most by Hirst’s auction stunt. Struggling artists yet to make a name rely on dealers to give them a chance. By circumventing the dealers, Hirst denies them the revenue that allows them to take chances on new artists whom the public has yet to discover. Of course, many young artists today market directly to the public through the internet, but even that system relies on the public finding such artists mostly by chance. For the lack of a better system, galleries remain the best delivery system for new art. Stories are already begin to appear despairing of the number of small New York galleries closing due to the current financial crunch. When only the big galleries remain, even those will be forced to take fewer chances and to concentrate on name brands. The publishing world already suffers from this syndrome, with giants such as J.K. Rowling’s Harry Potter sucking up so much oxygen that new authors can never take that first breath. 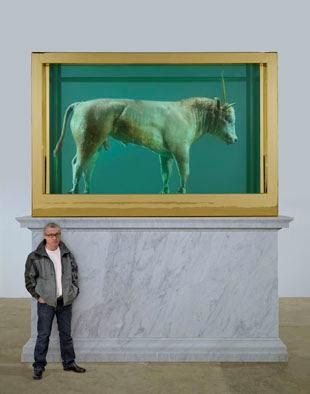 Those looking to hype Hirst’s venture compare this auction to audacious gestures of the past like Marcel Duchamp’s Fountain. But where Duchamp’s urinal poked fun at the art establishment’s excesses, Hirst’s ploy celebrates them. Instead of elevating the artist, Hirst’s money-grabbing stunt diminishes him. The photo of Hirst standing beneath his Golden Calf (above) makes him seem small and insignificant next to the beast itself, the golden idol to which he prays. Those who support Hirst’s auction scheme remind me of those who believed in “trickle-down economics” during the Reagan years. If Hirst succeeds (and that remains a big “if”), the wave he will bring won’t raise all boats but will instead sink them. Rumors that Takashi Murakami could follow Hirst’s example might be the first sign of an art dealer apocalypse. Perhaps Murakami and other artists are waiting to see just how well Hirst fares before taking the plunge, too. Hirst’s success isn’t guaranteed. As I said before, For the Love of God failed to generate the buzz and revenue Hirst hoped for. The beast in the box motif begun with the shark seventeen years ago seems horribly dated now. With The Golden Calf, Hirst tries to mash both of these motifs together, which I read more as the sign of desperate rather than a world-conquering artist. Like a shark, artists such as Hirst need to keep moving to stay alive. Stasis means slippage in today’s art market. It’s easy to root against Hirst’s success for all the reasons I’ve listed above, but perhaps the greatest reason is that he represents the worst element of big-name branding not only in the visual arts but all modern culture. The only response to such schemes is to stop feeding the sharks and allow the little fish room to swim and grow.