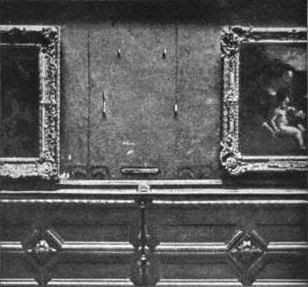 The date July 22nd owns one of the most fascinating confluences of art history in the whole calendar. On that date three great art robberies took place: the stealing of Leonardo Da Vinci's Mona Lisa from the Musée du Louvre in 1911, the theft of Francisco Goya's Portrait of the Duke of Wellington from the National Gallery in London in 1961, and the daylight heist of Edvard Munch’s The Scream and Madonna from The Munch Museum in 2004. Each of those thefts left a different type of void in the art world, aside from the physical one left. (A 1911 photo of where the Mona Lisa should have been appears above.) Each of these crimes, however, reflects the nature of the times and, in many ways, the nature of the work itself.

By the early twentieth century, the nationalist hatreds between European countries, festering over centuries, threatened to come to a head and explode. The tensions that led to World War I were already in place in 1911. Everyday people suddenly found themselves caught up in the rivalries of empires, including Vincenzo Peruggia, a workman who sometimes did jobs in the Louvre. Ignoring the fact that da Vinci had legally sold the Mona Lisa to King François I in 1516, Peruggia believed that it belonged to Italy as one of its cultural treasures and elected himself to right that wrong. Peruggia walked past the guards that day, pulled the painting from the wall, placed it under his coat, and calmly walked past the guards again and to freedom. For two years, Peruggia kept the Mona Lisa hidden under his bed. Finally, Peruggia contacted the Uffizi Gallery in Florence, hoping they would accept it back for Italy (with a finder’s fee to Peruggia, of course). The Uffizi contacted the Louvre and the authorities and the painting eventually returned to Paris, but not before triumphantly touring Italy and France and igniting the cult of Mona that continues today to make it the most overhyped painting in the world. In some ways, the enigmatic smile of the Mona Lisa contributed to her theft. Darling of the Symbolist movement and poetic launch pad to the purple prose of critics such as Walter Pater, the Mona Lisa served as a blank slate upon which any ideology could be written, including fervid nationalism. The Italian people soon hailed Peruggia as a hero and he received only a few months of jail time for his “forgiveable” act in their name. 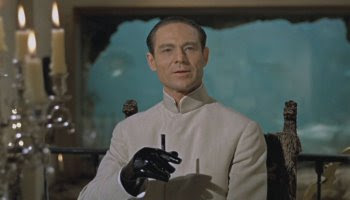 In 1961, the Cold War burned red hot. The United States and Soviet Union stood nose to nose and the world seemed to be filled with spies around every corner. No feat of deception seemed impossible. When Goya’s Portrait of the Duke of Wellington disappeared without a trace in 1961 from the National Gallery in London, speculation ruled the day. People imagined some master criminal circumventing the elaborate security system to walk off with the painting, which the British government had just recently saved from being purchased by a rich American oil tycoon by buying it for the British people with the British people’s tax money. A year later, when James Bond made his film debut in Dr. No, Bond sees the Duke hanging in Dr. No’s lair along with a bevy of stolen treasures (above). Surely, only a mastermind could have pulled off such a daring, well-executed crime. Or not.

Enter Kempton Bunton, a disabled retired bus driver living on a meager pension. When the British government instituted new taxes on television ownership on the heels of the Duke purchase, Bunton put two and two together and decided to take matters into his own wrinkled hands. With amazing nimbleness for a disabled pensioner, Bunton climbed through the window of one of the National Gallery’s bathrooms early one morning, pulled the Duke from the wall, and clambered back out with his prize. A newspaper soon received an offer to return the painting in exchange for a repeal of the TV tax but it was never taken seriously. Surely the real thief wanted more. Four years passed before Bunton finally returned the painting and, soon thereafter, gave himself up. To the end, authorities doubted Bunton’s involvement. It was as if only someone with sufficient power could steal such a symbol of power as the Portrait of the Duke. The glamour of the subject of the stolen work blinded its intended rescuers even when the culprit was right before their eyes. 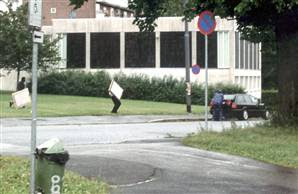 The 2004 theft of Munch’s paintings reflects our crueler, more violent contemporary age. Gun-wielding thieves boldly strode into the Munch Museum that day, threatened the crowd, and pulled the works roughly from the walls. A bystander even photographed the thieves making their getaway (above). These thieves, unlike Peruggia and Bunton, were truly terrorists, placing the lives of the gallery patrons at risk. The guards rightfully prioritized the safety of the people over that of the paintings. Clearly these weren’t criminal masterminds but thugs willing to use maximum force. No James Bond villains were imagined here. And after the theft came the inevitable “Now what?” for the thieves. They had fallen for the iconic power of Munch’s image, spread across popular cultures around the world, thinking that such a painting would surely bring a great price. But who would possibly pay for such immediately recognizable stolen goods? The thieves had stolen treasures they couldn’t possibly translate into cash. For two years, they sat on their booty and grew more and more desperate. Such desperation led them into a trap in 2006 in which authorities recovered the paintings, which had unfortunately been damaged in the affair. Neither nationalism nor personal grievance motivated the Munch heist. Pure greed ruled the day. The lucrative art market had painted a bull’s eye at the center of every iconic work of art in the world, and The Scream became its first victim. Even today, would-be art thieves target works by big name artists with no potential buyers, placing such works into a limbo from which they may never return. Of course, many art thieves act on the orders of shadowy art collectors looking to possess works that will never reach the market legally—a “commission” system that steals from the many to satisfy the possessive whim of the few. In all three cases occurring on this date, the story ends happily, but countless other art thefts lack their colorful details or happy resolutions and remain unsolved mysteries.