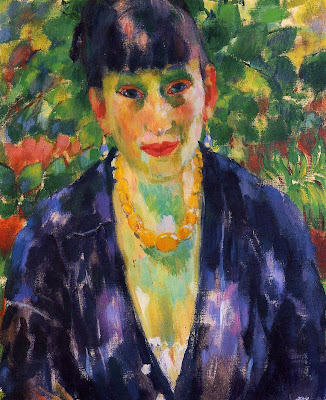 Of all the great European artists that died in World War I, the name of Rik Wouters rarely stands out. Born August 2, 1882, Wouters fought for Belgium and was taken prisoner by the Germans. Wouters escaped in 1915 but already suffered from the first signs of cancer of the jaw. After a series of painful operations, Wouters died on July 11, 1916, leaving behind 170 paintings, 35 sculptures, 50 etchings, 40 pastels, and 1,500 drawings from his brief, 10-year career. Wouters’ Reflections (above, from 1912) shows his debt to Henri Matisse and the Fauves, particularly in his explosive use of bright color. His use of green both in the verdant background as well as in the shadows of the model—his wife, Nell—unify figure and ground beautifully. Wouters extends the same free use of color that Matisse introduced in 1905 in Portrait of Madame Matisse (The Green Line) and Woman with a Hat and makes it almost shimmer and vibrate with energy. It’s fascinating to think just how much further Wouters would have gone had not fate intervened. 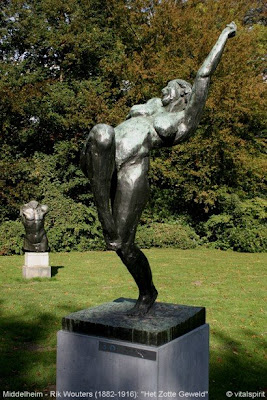 Wouters actually considered himself a sculptor. After his mother died when he was only six years old, Wouters developed a deeper bond with his father, a sculptor. Inspired by the American dancer ballerina Isadora Duncan, Wouters sculpted the unconventional female figure known as Crazy Violence (above, from 1912). “Crazy Violence” may be a poor translation into English (“The Foolish Virgin” is another suggested title), but it really captures the frantic electricity in Duncan’s movement. Wouter’s wife Nell actually posed for the sculpture, but the pose itself is pure Duncan, whose modern dance routines swept across early twentieth-century Europe and made her the toast of artists and intellectuals riding the new artistic wave. I’m not sure if Wouters ever saw Edgar Degas’ sculptures of women dancing and standing in awkward positions, but Crazy Violence seems like a Fauvist updating of Degas’ own approach to dancers and the dance. Just as Duncan threw out all the rules of ballet, Wouters throws out all of the rules of sculpting dancers, including the few that Degas himself deigned to still follow. 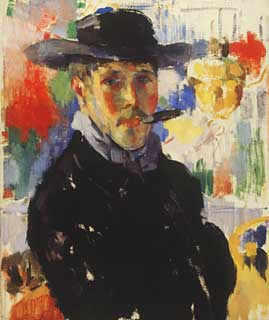 Wouters painted several self-portraits, including Self-Portrait With Cigar (above, from 1913). Some even show Wouters sporting the black eye patch he wore as his jaw cancer spread and affected his vision. The background of this 1913 Self-Portrait looks as if Wouters posed himself in front of a 1950s Abstract Expressionist painting, just another example of how inventive and forward-thinking the young artist was. Wouters looks out from this self-portrait with complete confidence in his abilities, still safe behind the shield of invulnerability all young, vibrant creators enjoy. Until his final illness, Wouters worried more about Nell’s health and her struggles with tuberculosis. Ironically, Nell lived another fifty-five years after Wouters’ death, always looking for ways to keep the memory of her husband’s art alive. In the midst of the crazy violence of the first decades of the twentieth century, Rik Wouters brought a beautiful new sense of order, however briefly.

I am astonished by this artist!

I love the Isadora Duncan statue. She is a favorite of mine and is featured in "The Privilege of Voting."

If you are interested in the many exciting and surprising twists and turns that played into women winning the vote in England and America, I hope you will check out "The Privilege of Voting."

It is a new and exhaustively researched historical e-mail series that goes behind the scenes in the lives of eight well-known women from 1912 to 1920 to reveal the sexy, shocking truth of HOW the suffragettes won the vote.

The women depicted include two of the most beautiful and outspoken suffragettes -- Alice Paul and Emmeline Pankhurst, along with Edith Wharton, Isadora Duncan, Alice Roosevelt, and two stunning presidential mistresses.

There are weddings and funerals, babies in peril, damsels in distress, war, peace, broken hearts and lots of hot affairs on the rocky road to the ballot box.

The best part is it's ALL true!

Each action-packed e-mail episode takes about 10 minutes to read, so they are perfect to enjoy on coffeebreaks, or anytime.

You can subscribe to receive free twice-weekly e-mails at: