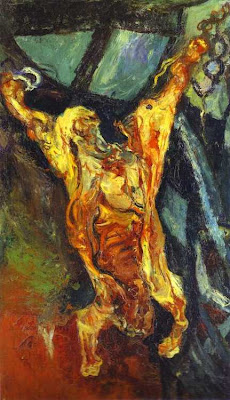 While working in his Paris studio in 1924, Chaim Soutine hung an actual side of beef as a model for his Carcass of Beef (above, from 1924). Soutine, who died on August 9, 1943, grew up in such poverty in his small Jewish town in Lithuania that we only know he was born sometime in 1894. Accustomed to hunger since childhood, Soutine saw the beef as a beautiful still life rather than a meal. Despite the protests of neighbors, who could smell the rotting meat, Soutine continued to paint, accustomed to hatred directed at him since his earliest years. His devoutly Jewish community condemned any form of art. Soutine actually received beatings at the hands of siblings and neighbors when he tried to draw. When one neighbor family beat Soutine for trying to draw their father, Soutine’s mother sued them for damages. Fittingly, Soutine used the money awarded to enter art school in 1909. After a year of scraping together enough cash to buy a fourth-class ticket, Soutine boarded a train to Paris and a life of more poverty and struggle, but freedom, finally, to pursue his art. 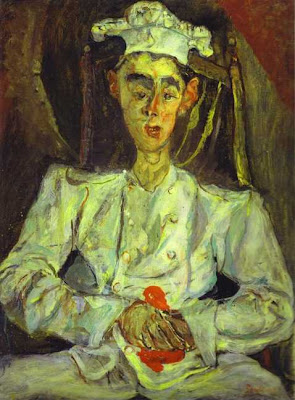 Once in Paris, Soutine soon united with equally poor, equally creative artists such as Amedeo Modigliani, Jacques Lipschitz, Marc Chagall, and Fernand Leger. Soutine and Modigliani shared rooms until Modigliani’s death in 1920, which wounded Soutine deeply. Soutine’s portraits, such as Pastry Cook with Red Handkerchief (above, from 1922-1923), show Modigliani’s influence in how they distort the human figure, but add a whole new level of violence beyond Modigliani’s contortions. Unable to hire models, Soutine painted anyone who would sit for him, including the simple waiters and cooks who lived and worked in his neighborhood. In 1923, Soutine’s ship finally came in in the person of Dr. Albert C. Barnes, who purchased sixty of Soutine’s paintings for his collection that would eventually become the Barnes Foundation. Never again would Soutine need to worry for money. 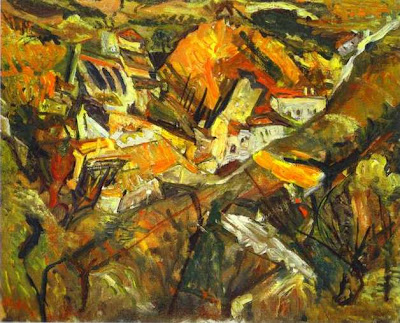 But new worries came in the form of anti-Semitism and the Fascist Nazi regime when they invaded France during World War II. When the Germans bombed Paris during World War I, Soutine fled to southern France and painted such Van Gogh-inspired, pseudo-Cubist works as Céret Landscape (above, from 1919). Unfortunately, nowhere in France could Soutine find safety from the Nazis. Soutine often slept in forests during rainstorms to elude capture, which exacerbated the stomach ailments he faced his entire life. Just two weeks before the liberation of France by the allies in 1944, Chaim Soutine died during a long-overdue operation on a massive stomach ulcer. From inconceivably humble beginnings, Soutine rose to the heights of the art world, painting an oeuvre that influenced later artists such as Francis Bacon and Lucian Freud and perhaps even the Abstract Expressionists. Ignoring the hunger in his belly, Soutine never failed to feed the hunger in his heart to create images reflecting his inner turmoil.

Now I know all of Soutine's paintings and love most of them, but I agree with you that his ship would not have come in, had Barnes not rescued him from penury.

So my question is: why did Barnes, a man who seemed to love Renoir and gentle impressionist art, go for the jagged and difficult art of Chaim Soutine?