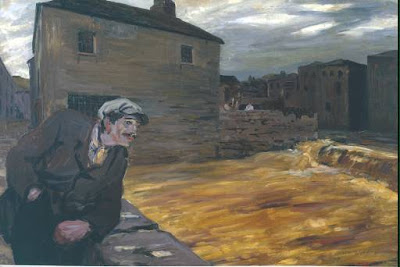 In college, I indulged my Irish heritage and took a course on Irish literature, learning about everything the Táin Bó Cúailnge to Buile Shuibhne to Seamus Heaney. Learning about the roots of Irish mythology gave me a greater appreciation of the poetry of William Butler Yeats, Ireland’s greatest poet of the twentieth century. It also gave me a finer appreciation of the art of his brother, Ireland’s finest painter of the twentieth century—Jack Butler Yeats. Born August 23, 1871, J.B. began his career as an illustrator, even delving into the world of comics and creating the first comic strip based on Sherlock Holmes, titled Chubblock Holmes. Like W.B., J.B. evolved as an artist throughout his career. Paintings such as Morning after Rain (above, from 1923) show J.B. still the realist illustrator yet beginning to use the thick impasto that would increasingly become his signature style. The river in the background is the Sligo, near where Yeats grew up and learned painting from his father John Butler Yeats. Everything in this painting speaks of what it was like to be Irish at that time and place, but soon Jack would explore the mythic and universal nature of his Irishness. 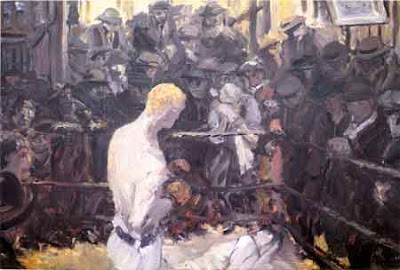 In his painting The Small Ring (above, 1930), J.B. lays the impasto on thick, muddying the surface of the painting while still allowing us to discern the young athlete standing over his fallen foe. Like George Bellows, George Luks, and other members of the Ashcan School in America, J.B. enjoyed the sport of boxing while also recognizing the almost mythic aspect of the pugilist warrior. In fact, J.B.’s father spent a great deal of time socializing with the Ashcan School in New York city at this time, helping John Sloan in particular rediscover his Irish roots. The Irish spirit always involves some degree of pugnacity—the eternal underdog of Europe fighting for a place in the sun and out of the shadows of encroaching empires. I like to think of the man in The Small Ring as a modern-day Cúchulainn, the Irish Achilles, taking on all comers.

If I had a better grasp of Irish mythology, I’d try to match up the mythic poetry of W.B. with the mythic paintings of J.B., such as The Death of Diarmuid, the Last Handful of Water (above, from 1945). In The Pursuit of Diarmuid and Gráinne, Diarmuid is wounded by a wild boar during a hunt. Her intended husband Fionn mac Cumhaill has the power to heal anyone who drinks water from his hands. Twice Fionn gathers water for Diarmuid in his hands and twice he intentionally lets it fall before reaching her. On the third and final trip he reaches her with a handful of water, but Diarmuid is already dead. By 1945, J.B. had seen too many years of willful self-destructiveness not only among the Irish people but the entire people of the world. Yeats became friends with the exiled German Expressionist Oskar Kokoschka during World War II and took on much of his thickly painted style and dark world outlook. J.B.’s famous father and brother often joked that he was the both the finest painter and poet in the family. In his paintings, Jack Butler Yeats managed to meld painting and poetry in creating images as beautiful and bittersweet as the long history of Ireland itself.