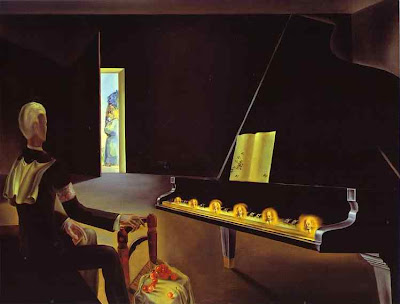 The most fascinating and infuriating aspect of Salvador Dali is that you never really knew when he was kidding. Born May 11, 1904, Dali would say or do anything to provoke. On one level, he was a provocateur who could expose the hypocrisies of civilization. On a different level, where he wasn’t kidding, he could seem almost monstrous in his embrace of the unthinkable. For many critics, even when Dali was alive, Dali suffered from a fascism problem. Did Dali really admire fascist leaders, or was it all a big, decades-long joke? Either way, Dali’s examination of political strongmen goes a long way back, beginning perhaps with Partial Hallucination: Six Apparitions of Lenin on a Piano (above, from 1931). Like Warhol would do much later with Mao, Dali repeats Vladimir Lenin’s likeness until it loses all effect or actually becomes oppressive in effect. It all depends on how you see it, or think the artist sees it. By placing Lenin on a piano, Dali may suggest that Lenin’s policies were instrumental in making Russia an international powerhouse, as if a strong Russia could never have been orchestrated otherwise. Thanks to the rulelessness of Surrealism, however, Dali slips and slides away from any conclusive answers that could get him in trouble. 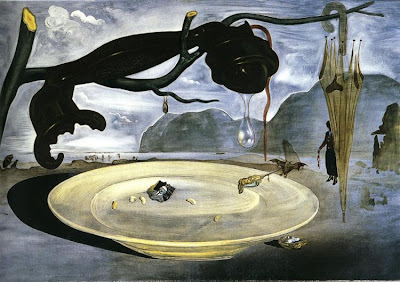 Dali’s fellow Surrealists surely didn’t think he was joking. André Breton accused Dali of defending Adolf Hitler as “enigmatic” rather than murderously insane or some other, more accurate description. Dalí’s The Enigma of Hitler (above, from 1938) embodies the artist’s strangely convoluted approach to Hitler around this time. Dali took the Surrealist apolitical credo to mean that even a Hitler could not be denounced. Breton and the other Surrealists expelled Dali from their ranks after a 1934 “trial.” Even after World War II, Dali flirted with fascism in the person of Francisco Franco, fascist leader of Spain. Dali would sometimes talk or write of the master-slave dynamic, casting himself in one role or the other and sometimes both. Philosophers from Hegel to Foucault have probed the depths of the master-slave relationship, often delving into the sexual component that Dali certainly injected into his discourse on the concept. Did Dali’s fascination with fascism come from some need for a master to enslave him? Or was Dali just playing at slavery before turning the whole thing on its head in the end, as he sometimes did, and declaring himself the master by virtue of his artistic talent? We just don’t know. 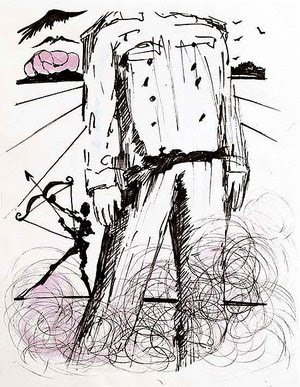 In the late 1960s, many intellectuals made a cultural hero of the Chinese leader Mao. Such a heroic vision came long before the atrocities Mao committed against his own people were known in the West. When a book of poems by Mao was to be printed in English, Dali created a series of prints to accompany them, including Bust of Mao (above, from 1968). Dali’s “bust,” of course, is anything but a bust, literally decapitating the head of the Chinese Communist Party. Like Lenin, Hitler, Franco, and other strongmen before him, Mao fostered a cult of personality around himself thinking that his personal charisma could keep his movement together. Oddly, Dali’s decapitation of Mao short-circuits the leader’s charismatic power. Faceless, Mao is just an empty suit. I’d like to think that Dali’s Bust of Mao says that Dali recognizes the emptiness of Mao’s cult of personality and, by extension, all cults of personality throughout time. I want to think that, but I just can’t be sure. Dali himself used personal charm to draw followers to himself. The magnetism of his magical artwork amplified his person to near-mythic status. Like Lenin, Hitler, Franco, and Mao, Dali can be identified by a single name. I love Dali’s art and mystique. I just wish he didn’t keep such bad company.
Posted by Bob at 12:01 AM

For some light Dali viewing, check out the video of him here: http://baroqueinhackney.wordpress.com/2009/05/13/an-elegantly-dressed-yes-man/

I thought it was fun to watch.

(Sorry I don't know how to embed it)