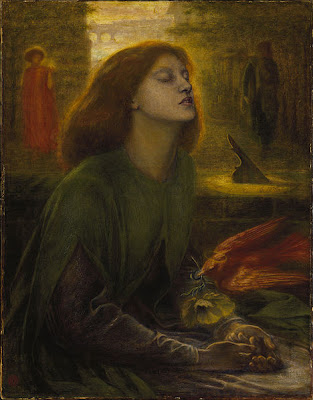 The idea of the “maneater” or, as the French would say, femme fatale is one of the oldest tropes in Western civilization, going all the way back to Samson’s Delilah in the Bible and further back into the darkness before recorded time. Much of the look of the modern maneater comes from the brush of the most sensual member of the Pre-Raphaelite Brotherhood, Dante Gabriel Rossetti. Born May 12, 1828, Rossetti founded the PRB with John Everett Millais and William Holman Hunt and followed the religious and moralizing trend of the Brotherhood at the beginning. However, Rossetti drifted more and more to the carnal over the spiritual, especially after the death of his one-time model, fellow-artist, wife, and everlasting muse Elizabeth Siddal. A year after Lizzie’s death, Rossetti began painting Beata Beatrix (above, from 1864-1870), which casts his departed wife as Beatrice Portinari from Dante Alighieri's poem La Vita Nuova. Dante Alighieri held Beatrice up as the epitome of purity, and Dante Gabriel Rossetti seems to follow suit, but there are hints that Siddal as Beatrice isn’t as snow white. The dove that brings flowers isn’t the conventional white of purity but rather the red of passion. Rossetti ostensibly shows the moment when Beatrice dies and experiences the rapture of the divine embrace, but like Bernini’s Ecstasy of Saint Theresa, the difference between an expression of religious thrill and that of sexual orgasm is clearly blurred. As discussed in Jay A. Clarke’s Becoming Edvard Munch: Influence, Anxiety, and Myth (my review here), Edvard Munch recognized this dual nature in Rossetti’s Beata Beatrix and translated it into his Madonna. Rossetti’s Beata Beatrix perfectly embodies the In Freudian idea of the Madonna-whore complex decades before Freud himself coined the term. 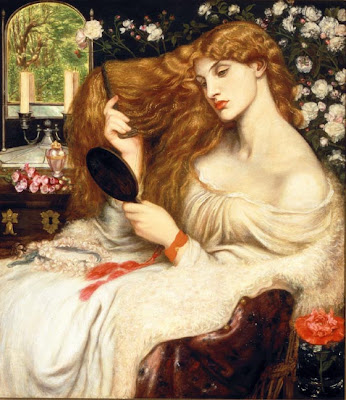 After the death of Lizzie Siddal, Rossetti struggled to find firm footing in her personal life, even as his artistic career blossomed. Rossetti careened among a traffic jam of mistresses, experiencing his fair share of total wrecks. One of those mistresses, Fanny Cornforth, served as the model for Lady Lilith (above, from 1868). Mythology paints Lilith as a strong, usually destructive female force and sometimes even as the first wife of the first man, Adam. Rather than mythologize the scene, Rossetti paints his Lilith in contemporary clothing. Fanny’s Lilith lounges in her bedclothes rather than the corseted garb of Victorian days and contemplates her pouty lips in a mirror. Fast forward a century, and Lady Lilith becomes Sharon Stone crossing her legs in Basic Instinct. Rosetti accompanied Lady Lilith with Sonnet LXXVIII, entitled "Body's Beauty," from his book of poetry The House of Life:

Of Adam's first wife, Lilith, it is told
(The witch he loved before the gift of Eve,)
That, ere the snake's, her sweet tongue could deceive,
And her enchanted hair was the first gold.

And still she sits, young while the earth is old,
And, subtly of herself contemplative,
Draws men to watch the bright web she can weave,
Till heart and body and life are in its hold.
The rose and poppy are her flowers; for where
Is he not found, O Lilith, whom shed scent
And soft-shed kisses and soft sleep shall snare?
Lo! as that youth's eyes burned at thine, so went
Thy spell through him, and left his straight neck bent
And round his heart one strangling golden hair.

The long hair Lilith dithers with in the painting becomes literally a noose that strangles unfortunate men in the poem. Whereas Beata Beatrix was equal parts Madonna and whore, Lady Lilith is pure harlot of the black widow variety. 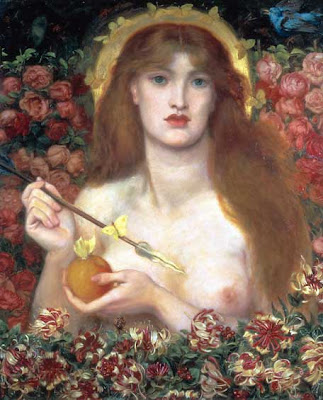 It’s easy to see Rossetti as an embittered chauvinist in his portrayals of his maneaters. Just as the dangerous Lilith is also the strong woman of Lilith Fair fame, Rossetti’s femme fatales are also copies in some respect of the highly accomplished Lizzie Siddal, the supermodel of Pre-Raphaelitism that added a sister to the Brotherhood. With Venus Verticordia (above, from 1863-1868), Rossetti maintains the sense of danger while simultaneously exposing the full power of womanhood. As with Lady Lilith, Rossetti appended a sonnet to Venus Verticordia:

She hath the apple in her hand for thee,

Yet almost in her heart would hold it back;

She muses, with her eyes upon the track

Of that which in thy spirit they can see.

Alas! the apple for his lips, - the dart

That follows its brief sweetness to his heart,

-The wandering of his feet perpetually.'

A little space her glance is still and coy;

But if she gets the fruit that works her spell,

Those eyes shall flame as for her Phrygian boy.

Then shall her bird's strained throat woe foretell,

And as far seas moan as a single shell,

And her grove glow with love-lit fires of Troy.

Rossetti mixes the message of menace found in the poem by adding natural touches to the painting. The arrow and apple of doom remain in the painting, but the lack of clothes (hence, all trappings of civilization) and addition of flowers portray Venus as Mother Nature, and you don’t fool with Mother Nature. Rossetti painted the face of Venus from one of his model-mistresses, Alexa Wilding, but he painted the body from a tall nanny that he happened to pass in the street. Only a woman who literally stood head and shoulders above the crowd would fit the bill for this painting. Rossetti painted all three of these maneaters around the same time, showing how he moved back and forth in his view of the subject—a complex and complexing concept that consumed him as he created the most unforgettable images and poems of his career.

I recently wrote a post about the history of the Lilith myth and depictions of Lilith in art. Isn't Rossetti's painting of Lilith beautiful?