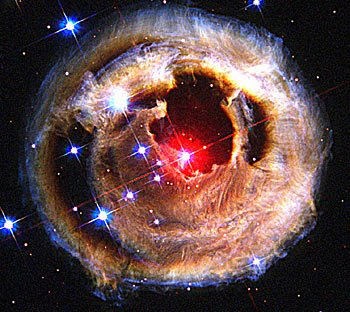 O Lord my God! When I in awesome wonder
Consider all the works Thy hands have made.
I see the stars, I hear the rolling thunder,
Thy power throughout the universe displayed.

—From the Christian hymn “How Great Thou Art”

Growing up in the city, I rarely could look up into the night sky and see many stars. The light pollution thrown off by cities makes it almost impossible to stargaze with the naked eye. Moving out to the suburbs after we got married, I finally could see the stars. Many a thirty-second trip to take the trash outside at night has turned into several minutes of starry wonder. My friend Cathy recently sent me an old link to the top ten list of photographs taken by the Hubble Space Telescope as voted on by astronauts. (Pictures of the full top ten list can be found here.) All of these can be considered art in the fullest sense—creations of the ultimate artist. All of them testify to the fact that even as far as the human mind can go in terms of abstract imagery, nature can always go one better. The Hubble people titled the image above Starry Night after Van Gogh’s famous painting of the same name. The photograph shows “a halo of light around a star in the Milky Way.” Any discussion of stars and art is always going to roll around to Van Gogh’s painting, but I think that Vincent himself, a pious man, would be more humbled by nature’s beauty than gratified by the comparison. 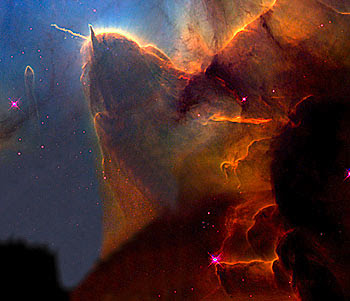 The term “star” is thrown around too much today. You have sports stars and movie stars and rock stars in such abundance that might actually rival actual stars in number. The word doesn’t mean anything anymore. Ed McMahon hosted that horrible show Star Search in the 1980s and 1990s in pursuit of the idea that stars could be plucked out of thin air on command. The Hubble photo of the Trifid Nebula above shows a “stellar nursery” nine thousand light years from Earth in which new stars are actually born (without the help of Ed McMahon). The flip side of modern life’s loss of wonder is modern life’s lack of humility. We place ourselves among the stars as if we belong there by birthright rather than by earning that right. The trivialization of the term “star” marks how degraded our sense of wonder has become. Albert Einstein said that his sense of God was his sense of wonderment. Too bad he died before he could see for his own eyes the sights of the universe he only could picture in his mind. 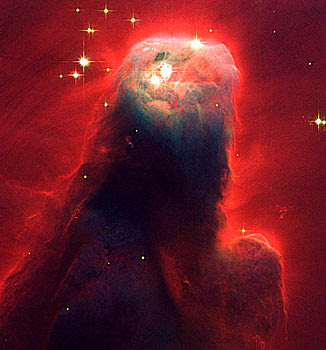 Other people would argue that humanity needs to put itself among the stars or else feel small and insignificant in a large and mostly empty universe. The Cone Nebula above is two and a half light years long, or the distance covered in twenty-three million round trips from Earth to the moon. Yes, we are small. Yes, in some sense, we are insignificant. But, in the most important sense, we are highly significant. The same creator who created these wonders sprinkled throughout our skies gave us the intelligence and spirit to look up and pursue them. Physically, it is impossible for us to travel to almost all of these stellar regions. Through art, however, we can travel anywhere, from the universes stretching infinitely beyond to the tiny universes contained deep within us. I can sit on my deck and watch the stars with Annie and Alex on warm summer nights the way people have done for millennia. Such experiences, like art itself, link us to our humanity and the humanity of each other. As Casey Kasem would sign off, “Keep your feet on the ground and keep reaching for the stars.”

[Many thanks to Cathy for sending this link to me.]
Posted by Bob at 12:01 AM