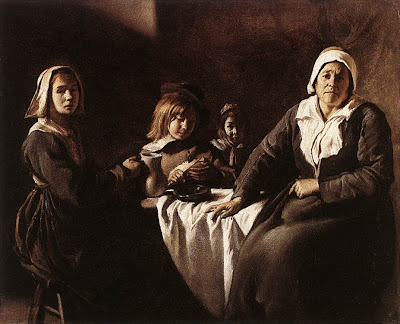 One of the most befuddling bands of artists for attributers remains the Le Nain brothers—Louis, Antoine, and Matthieu. Louis, who died on May 23, 1648, was born around 1593, followed by Antoine in 1599 and Matthieu in 1607, but even those birth years are partly conjecture. Complicating things even more so, the brothers signed all their works “Le Nain,” making conclusive individual attribution impossible. However, Louis, the eldest brother, usually gets credit for the peasant scenes the Le Nain name is best known for today. In Four Figures at Table (above, from the 1630s), a peasant family readies for a meal. The sepia tones of the painting lend an extra touch of nostalgia. Ironically, this portrait of peasant simplicity began as a portrait of a rich man. X-ray technology revealed the red touch in the boy’s face to be a pentimento, or painted over, portrait of a man wearing a red ruff. Whether the subject of that portrait failed to pay up is unknown, but his prosperous face was covered over much as the Le Nain brothers’ prosperous connections were covered over during a revival of their work in the mid-nineteenth century. Gustave Courbet saw recently installed works by the Le Nains in the Louvre and followed their example in creating such works as A Burial at Ornans. Little did Courbet suspect that a nobleman lurked beneath those peasants’ faces, or even that, as some critics today suspect. 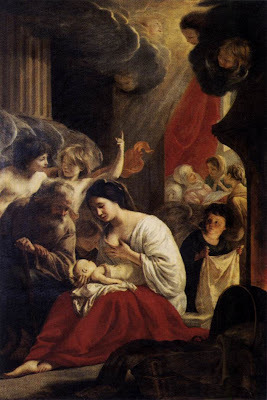 During their lifetime, the Le Nain brothers made their fortune through commissions from the church and the upper class. Their Birth of the Virgin (above, from 1645) still hangs in the Cathedral of Notre Dame in Paris. Such work, and other paintings by the brothers depicting popular mythological subjects, follows the tastes of the period. This conventionality and willingness to play the game well helped all three brothers become members of the French Royal Academy at its inception in 1648, the year that both Louis and Antoine died. Although Matthieu, the youngest, survived until about 1677, the “Le Nain” signature disappears on works after 1648, as if Matthieu let it die with his brothers. Matthieu, the official painter of Paris since 1633, eventually aspired to the nobility that he had served so well beside his brothers. That service, however, disserved the Le Nains during the French Revolution, when angry mobs targeted anything tainted by association with the church or the king. Associated with both blacklists, many of the church-related works of the Le Nain brothers met the flames during the revolution, effectively rewriting who and what they were until their “rediscovery” in the 1840s as painters of peasants. 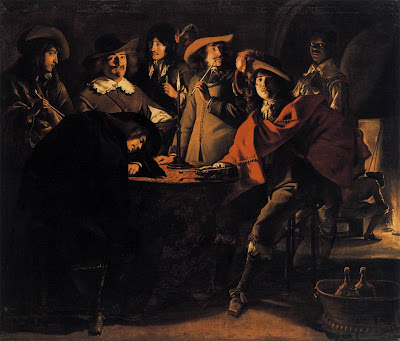 Although much of their work is awkward in composition, dreadfully mainstream, or both, the Le Nain brothers sometimes could create a work as mysterious and compelling as Smokers in an Interior (above, from 1643). Caravaggio’s chiaroscuro clearly influences this painting, as it did so many other works in the seventeenth century. But Smokers in an Interior adds a mysterious (yes, smoky) element in the darkness. We don’t know who these men are or what they are doing together, or even if they are indeed together. Some of the men stare off blankly into space, disconnected from the rest of the pack. Others confront the viewer directly, as if caught performing some secret rite concluded by the conviviality of smoking together. In the balance of darks and lights here, the illuminations only serve to make the shadows rise in importance. Smokers in an Interior serves as the perfect visual emblem of the Le Nain brothers in its ability to generate question after question. Did Louis the eldest turn his attention from peasants to the middle class? Did Matthieu the overachieving baby of the family rise to the top of the class? Did Antoine, the middle brother, finally squeeze out of the obscurity of middledom? The Le Nain brothers keep their silence still.
Posted by Bob at 12:01 AM

Great story as for me. It would be great to read a bit more concerning this theme. The only thing it would also be great to see here is a photo of some blocker.

Thank you for the detailed history lesson. Although I'm more into the art itself then into the artists it's nice to read about the men behind the art sometimes.