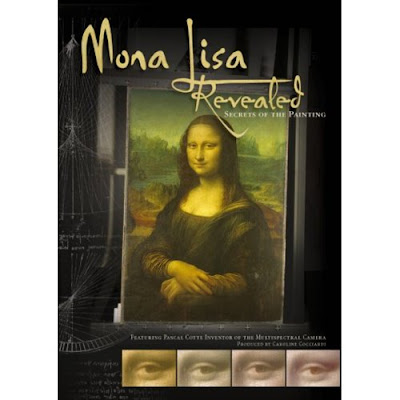 In October 2004, when the Louvre decided to move Leonardo Da Vinci’s
fragile masterpiece, the Mona Lisa, to a different frame as part of the conservation of the most famous painting in the world, the French National Museum Laboratory asked photographic engineer and inventor Pascal Cotte to photograph La Gioconda using his cutting edge technology. Using a “multi-spectral” process of thirteen different scans of the painting, Cotte created images at 240 million pixels resolution—eight times greater than any photograph ever made before of the painting. In Mona Lisa Revealed: Secrets of the Painting (above), we follow Cotte as he takes those images and studies them to reveal many of the secrets the grand lady of art history has kept to herself all these centuries. Combining Old Master artistry and New Age technology, Mona Lisa Revealed takes us back to the past while providing a glimpse at what may be the primary art history tool of the future. 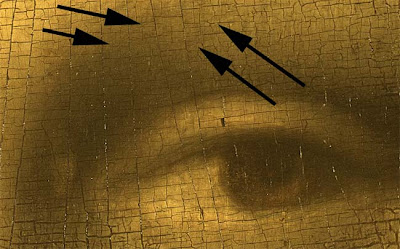 Cotte easily confesses that he has no formal art history background. However, his lifelong fascination with the Mona Lisa inspired him to leap at the chance to get beneath the surface photographically and literally step back in time to see what remains of Leonardo’s handiwork as he intended it to be seen. Cotte’s photographs bring you closer than any visit to the Louvre possibly could, allowing you to study the cracks and fissures of the Mona’s face as if your own face hovered just inches above hers. Using documents throughout history, such as Giorgio Vasari’s contemporary account and copies of the work made by others throughout the ages, Cotte finds traces of the lost Lisa. As hinted at in the image above, the Mona Lisa may have once had eyebrows and lashes. The filmmakers enlist Da Vinci scholar Martin Kemp to explain how such details would have been among the last added and, therefore, quite easily the first to go, either by misguided restorations or the natural effects of time. Cotte brings scientific evidence that may finally decide much of the speculation surrounding the Mona Lisa. In addition to the Mona Lisa, Cotte has photographically studied Da Vinci’s Lady with Ermine, revealing that painting’s secrets as well. Cotte hopes to build on the success of these two studies to eventually photograph and study all of the acknowledged works of Leonardo. 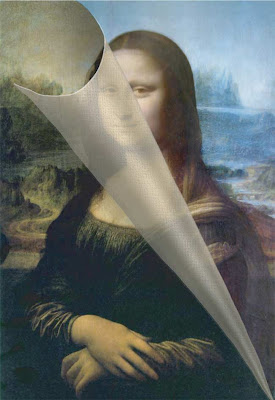 The revelations of Mona Lisa Revealed are truly stunning. When Cotte pulls back the veil of time (above), we see the Mona Lisa as she first may have looked, in brilliant color with stunning details unseen for centuries. The fragile state of the Mona Lisa, like that of many of Da Vinci’s works, thanks to his endless experimenting with materials, makes actual restoration at this level impossible, so Cotte’s virtual restoration is the best possible. The film discloses all twenty-five secrets, as promised, and even throws in a twenty-sixth available only on the DVD. Cotte’s colorful personality comes across in the film, which follows his 2007 exhibition tour of Europe and America to disclose Mona’s secrets. The filmmakers try to recreate the breathlessness of the tour with globe-trotting graphics and a cheeky narrator posing as the Mona Lisa herself. These touches seemed cheesy to me at first, but eventually grew on me as being perfectly in synch with the overall liveliness of Cotte’s project, which is to breathe new life into the most hyped, most studied, most overexposed single image in Western civilization. Perhaps the most important secret revealed in Mona Lisa Revealed is that technology today can work with art history to recapture sights long thought forever lost. See Mona Lisa Revealed and you’ll never see the Mona Lisa the same way again.

[Many thanks to Microcinema for providing me with a review copy of Mona Lisa Revealed: Secrets of the Painting.]
Posted by Bob at 12:01 AM

That's amazing that they can recreate what it would have been like so well.

I always was thrown off by the lack of eyebrows.

Oh but what's the end result? I need to see the end result! I've never quite understood what everyone around me sees in the Mona Lisa, it's just a girl with a ~smile~, ugh. But the true colours look promising!

Hello!
I hope things are going wonderful for you.
I am not sure about how this blog thing works.
But I am hoping for your help.
i am a student and I have to write a final report for my Art History class. I have a vivid image of a painting from the NYC MOMA (I am pretty sure it was there) and I do not know the Author, or the style. I am guessing it was painted early 1900's since I had just read Emma Goldman's Diary and thought about it. It is a scene of factory workers. The colors are dark (black, gray, red) and the whole painting brought tears to my eyes. It is not very famous, I am guessing. But if you could help me with my search of an author, or the specific name of the style that focused on the injustices of labor workers I would really appreciate it. Thank you very much for your time,
Merit