Man on the Street


Life in the big cities of Germany inspired Ernst Ludwig Kirchner like no other artist of his time. Born May 6, 1880, Kirchner helped found Die Brücke in 1905 along with three other students in Dresden. Kirchner painted Street, Dresden (above) initially in 1908, when Brucke was at its height, but continued to return to make changes up to 1919, long after Brucke had moved on to Berlin in 1911 and even after Brucke disbanded in 1913. Kirchner’s style exemplifies German Expressionism for me, taking the facts of a simple street scene and imposing the vision of the artist upon it. Whenever you see well-dressed women in a Kirchner streetscape, you’re most likely safe in assuming they are prostitutes hawking their wares. The way Kirchner outlines the orange hat of the woman in the foreground with even brighter orange highlights makes me think of a neon sign in its garish, commercial advertising feel. The formless faces in Street, Dresden resemble those of Edvard Munch’s 1892 painting, Evening on Karl Johan Street. Kirchner and the other Brucke artists idolized Munch and even unsuccessfully invited him to join their group. In Street, Dresden, Kirchner captures much of the Munchian sense of alientation and unease. 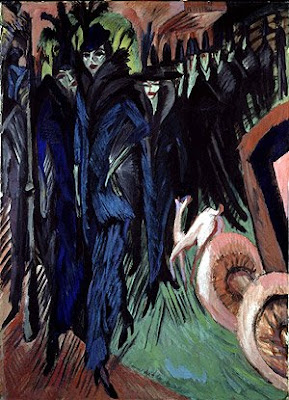 By the time that Kirchner had painted Friedrichstrasse (above, from 1914), Brucke was over and he was ensconced in Berlin, a city much more international and cosmopolitan than the still-medieval looking Dresden. Kirchner paints Friedrichstrasse in a series of slashing lines, conveying a sense of endless movement similar to the Italian Futurists painting at the same time. The women, again, are most likely prostitutes. The pattern I’ve noticed in Kirchner’s art is that the naked figures are usually young and innocent, whereas the older, fashionably dressed women are far from innocent. Kirchner sets up that opposition to dramatize what he saw as the deadening and corrupting effect of modern civilization. Like Gauguin, Kirchner saw a simplicity and honesty in the art and lifestyle of Oceanic cultures and mimics their art in the angularity of his own. But even that angularity falls into two categories in Kirchner’s world—youthful innocence is simplified into flat planes and colors, rejecting all painterly illusion, whereas aged corruption becomes sinister in the sharp lines of faces and bodies that threaten to cut you like a knife. 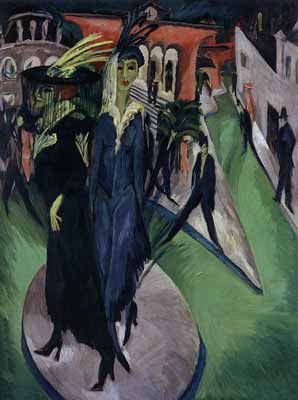 In Potsdamer Platz (above, from 1914), Kirchner merges his Munch-like instincts with his primitivism (although the two are certainly not mutually exclusive). The bodies and faces scream Munch, but the harsh angles of Kirchner’s later development appear. The street itself, however, now seems to shift and move, devolving into a nightmare landscape. World War I loomed on the horizon, and Kirchner volunteered to serve at its beginning. By 1915, a total breakdown left him unfit to fight. Kirchner channeled his anguish into even greater Expressionist works. He came to see himself as the heir to the mantle of greatest German artist, following in the footsteps of Albrecht Dürer and Lucas Cranach the Elder. Sadly, the Nazis in their rise to power redefined what constituted German-ness. Kirchner, the self-styled most German of artists, found himself and his work excluded from German museums and collections as part of the “Degenerate Art” declamation. After watching much of his art either destroyed or sold away, Kirchner took his own life in 1938. If Kirchner had been French, he would have been called a flaneur, a connoisseur of street life mingling among the people and diagnosing the ills of society. But, alas, Kirchner’s German roots not only provided his richest material but ultimately spelled his doom.