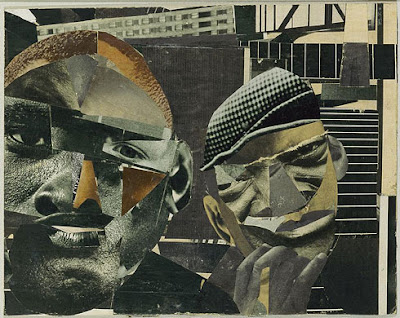 What sets black portraiture apart from the rest of portraiture as a genre? In Cutting a Figure: Fashioning Black Portraiture, Richard J. Powell argues that the difference lies “in the artistic contract between the portrayer and the portrayed: conscious or unconscious negotiations that invest black subjects with social capital… invariably linked to the subject’s sense of self—an awareness that through self-adornment, self-composure, and self-imaging upsets the representational paradigm and creates something pictorially exceptional.” What makes black portraits “exceptional,” in other words, is the way that the subjects “clothe” themselves psychologically to produce a “self” to be portrayed and understood by another. Romare Bearden’s collage titled Pittsburgh Memory (above, from 1964) embodies this building up of self from parts that Powell sees at the heart of the “subject-dominated portraits” of black subjects versus the larger history of portraiture in which the artist’s vision dominates. Powell riffs off the idea of collage and makes use of the phrase “cutting a figure” to capture “the sense of pride and exhibitionism implicit in this expression,” which are “often qualified by race, class, and historical circumstances.” What a white audience may view as immodesty, a black audience may view as self-expression. Powell cuts apart the different subgenres of portraiture to reassemble in the end a clearer picture of the power of portraiture to give a voice to the voiceless. 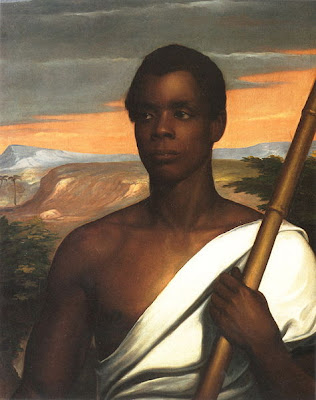 In the chapter titled simply, “Interlocutors,” Powell traces how early black portraiture dealt with the issue of slavery and the continued control of the white population over image making. The “thematic current that flows throughout these works, intentional and subconscious,” Powell writes, “is freedom: both personal, bodily emancipation and sovereignty in a more abstract, metaphysical sense.” Nathaniel Jocelyn’s Cinque (above, from 1840) neatly encapsulates this freedom-centered dynamic. When a group of Africans from Sierra Leone faced trial in the Amistad case recounted in the 1997 film, abolitionists commissioned Jocelyn to paint a portrait of the slaves’ leader, Sengbe Pieh, whose name was mispronounced as Joseph Cinque. Jocelyn shows Sengbe with startling humanity. “Looking more like a Greco-Roman divinity than a brutish marauder, and with a staff that invokes the insignia of an ancient shepherd or wanderer,” Powell writes of Cinque, “this representation contradicts the prevailing perception of Cinque and his fellow Africans as savages and instead embraces a republican ideal, an allegorical representation of Christian proselytizing, and a symbol of black activism.” Powell then moves from Sengbe’s passive role in propagandizing against slavery to the active roles of activists such as Frederick Douglass and Sojourner Truth. Both Douglass and Truth used their personal appearances as weapons in the fight against slavery. Rumors that the exceptionally tall Truth was actually a man compelled her to bare her breasts in public to silence critics, which drew even greater sympathy to her cause as both a black and a woman. In Douglass’ case, Powell notes, the sexual dimension aided his cause differently. “[T]he hypnotic power that [Douglass] and certain other black men had over spectators” created “a potency that combined race, gender, and sexuality to achieve psychological dominion over cultural perception and social stratification,” Powell asserts. Thanks to photography and paintings, Douglass and Truth spread the word of freedom through the power of portraiture. 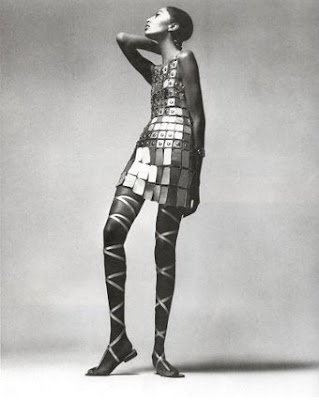 In a fascinating and daring leap, Powell abruptly turns his attention to the case of Donyale Luna, the first internationally acclaimed African-American fashion model. Almost completely forgotten today, Luna’s “Nefertiti-like face” appeared in magazines and on television regularly in the mid to late 1960s. Much of that forgetting comes from how unforgettable Donyale once was in the fashion world. “Contesting the prevailing white/male/artist-dominated production of acquiescent black images,” Powell writes, “Luna’s aggressive figure cuts through the racial and gender hierarchies, imposes its own aesthetic will, and prevails.” American magazines actually banned Richard Avedon’s 1966 photograph of Luna in a dress by Paco Rabanne (above) for this very aggression. In this section, Powell gives convincing weight to the sometimes lightweight world of high fashion modeling as a real barometer of social attitudes and the role of portraiture in revealing those views. Donyale stepped outside the boundaries of modeling to pall around with the likes of Miles Davis and Andy Warhol, write and act in plays, and even appear in films by Warhol, Federico Fellini, and Carmelo Bene. Even Dali doodled on Donyale during an encounter in 1966. Sadly, drug abuse led to Luna’s early death in 1979, just as models such as Iman and Grace Jones began to follow her unconventional path. In tracing the trajectory of Luna’s rise and fall, Powell prepares the ground for a later discussion of how in the 1980s, blacks were suddenly omnipresent in American media, from The Cosby Show to Michael Jordan’s endorsement blitzkrieg. Jean-Michael Basquiat comes to embody the “black bohemia” of the 1980s art scene. After the height of Gatorade’s “Like Mike,” however, comes the low of the 1990s rap generation, who “for better or worse, revealed a nihilism and avarice that, while present within any socioeconomic grouping, had not previously been seen so broadly or explicitly in an African-American context.” Tupak Shakur and others come to represent “the unheralded but irrefutable demise of a representative blackness as it had been known,” Powell laments. The strength and freedom of Douglass, Luna, et al. disappears into the void of materialism and anarchy of “thug culture.”

For Powell, the 1970s represent a “golden age” of black portraiture, in which “attention-grabbing hair-styles, along with clothing made of leather, polyester, and cotton with African-style prints, became the primary means by which African-Americans announced themselves anew, challenged the white status quo, and probed the more extroverted sides of their personality.” No artist got as down and funky in a fine arts way as Barkley L. Hendricks. Hendricks recognized that young African-Americans formed a sense of “blackness” from clothing and attitude. In a 1977 self-portrait titled Brilliantly Endowed, Hendricks painted himself nude except for some jewelry, striped socks, Converse sneakers, and an applejack cap perched on his head to emphasize the role in how clothes made the man, even when it was just the accessories. Later travels to Africa impressed on Hendricks the role of a specific black “attitude” via clothing in black cultural survival. During one of those trips, Hendricks encountered the singer and activist Fela, whom he painted posthumously in 2002 in Fela: Amen, Amen, Amen… (above). “Hendricks’ Fela employs his art as a creative offense,” Powell writes, “and his body as a jump-suited defense against moral hypocrisy, political corruption, and, above all, social invisibility.” 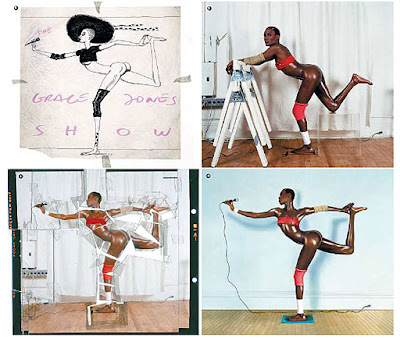 The decorative background of Hendricks’ portrait of Fela draws immediate comparisons to the iconic hip-hop portraits of Kehinde Wiley. In Wiley’s “Passing/Posing” paintings, however, Powell sees not the subject-centered portraiture of Hendricks but, instead, “Tupac Shakur-like ‘thug fiction’ where macho self-deception and hip-hop ‘fronting’ cut straight into the heart of representational matters.” Sadly, the subject center no longer holds in black portraiture for Powell, one of the many symptoms of a larger identity void that plagues not only African-Americans and America as a whole. “Through self-fashioning, provocative role-play, and other insignia,” Powell concludes, “peoples of African descent and their artistic delineators have slashed away at the fixed boundaries imposed upon black bodies in the public, predominantly Euro-American arena.” Like Jean-Paul Goude’s four-part portrait of Grace Jones (above, from 1978), the idea of the black portrait remains a fluid, ever-changing work in progress. Powell’s approach to the subject mimics that of a great jazz musician taking themes from here and there to create a new, personal composition full of individual flavor. Young jazz musicians looking to challenge the established lions would enter “cutting sessions” in which no mercy was shown. (Charlie Parker recalled having a cymbal thrown at him on his first attempt.) In Cutting a Figure: Fashioning Black Portraiture, Richard J. Powell enters the lion’s den of art history to do battle with the long legacy of portraiture and succeeds in emerging with a new vision of the black portrait as a valuable tool for self-fashioning in the past and, hopefully, for the future.

[Many thanks to the University of Chicago Press for providing me with a review copy of Richard J. Powell’s Cutting a Figure: Fashioning Black Portraiture.]