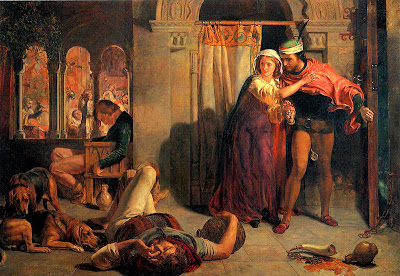 Before you even open Holman Hunt and the Pre-Raphaelite Vision, edited by Katherine Lochman and Carol Jacobi, you know that this is a different kind of art history book. The faux Victorian exterior design and endpapers transport you back to that time and prepare you to see the Pre-Raphaelite Brotherhood of William Holman Hunt, Dante Gabriel Rossetti, John Everett Millais, and others through their eyes and not through the distorting lens of a century and a half of critique, including the help (and sometimes harm) of fellow Victorian John Ruskin’s writings. In his 1905 book, Pre-Raphaelitism and the Pre-Raphaelite Brotherhood, Hunt railed against depictions of Rossetti as the clear leader of the group, calling himself the “true” Pre-Raphaelite adhering to the original tenets of the Brotherhood. “The book ends with an attack on decadence [i.e., French Impressionism and Modernism in general] and an expression of anxiety about the downfall of the noble British artistic tradition,” Carole Silver writes in her essay, “Visions and Revisions.” In a painting such as Hunt’s The Flight of Madeline and Porphyro During the Drunkenness Attending the Revelry on the Eve of Saint Agnes (above, from 1848), taking a scene from Keats’ poem The Eve of Saint Agnes, Hunt rewrites Keats’ lines to emphasize his moralizing mission. In casting the fleeing lovers as moral rather than the drunken partiers, “Dreams are compared with truth, appetite to love, social rules and rituals to personal freedom,” Carol Jacobi writes in “Pre-Raphaelite Rebellion: Brotherly Love.” As Jacobi puts it, the Pre-Raphaelites arose from “[s]tylistic innovation… generated by a shared interest in vision that was part of a timely and sophisticated inquiry into the nature of subjectivity… artists, poets, and critics alike debated the predicament of the individual in modern circumstance and the role of art in a material age.” This collection sets out to show how Hunt and his “brothers” set out to save the world through art by reaching back to the “Pre-Raphaelite,” pre-corrupted age of morality that the materialism of their society had left behind.

The most concrete example of Hunt’s personal mission to spread the word remains The Light of the World (above, the second, 1854 version). In “The Light of the World: Mission and Message,” Jonathan Mane-Wheck retraces the steps of the most traveled artwork in history, seen by more than seven million people on a 1905 tour of the British Empire, Canada, Australia, and South Africa. Mane-Wheck sees modern distaste for Hunt’s Light originating in confusion between the work itself and the “kitsch industry” surrounding and, in many ways, stemming from it. Hunt paints Christ holding a lantern and knocking on a door—an embodiment of opportunity knocking, in this case the opportunity to embrace salvation. Hunt himself, however, rejected harsh dogma. “Possessing a more synthetic, universalist concept of religion,” Mane-Wheck asserts, Hunt “was open to Judaism and Islam.” In fact, when Hunt created a smaller version of his Light in 1854, he modified the lamp with a star and crescent as a nod to Islam “to show the breadth of the Christian system, which takes in other systems,” Hunt told an interviewer at the time. Unfortunately, over time, Hunt’s personal intentions have been clouded not only by a religious intolerance he did not practice, but also by political appropriation. “In its journey across the globe,” Mane-Wheck writes, “The Light of the World had become an icon of British Imperial Protestantism.” Hunt certainly believed in the nobility of British art and its power to save, but may have been uneasy in his Christ being “drafted” in the battle for colonization. 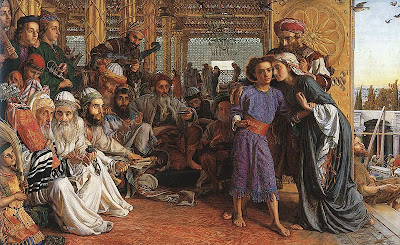 In “Textile Background: Cloth and Costume,” Linda Parry examines Hunt’s life-long relationship with fabrics and costume and how that experience played out in his painting. Both Hunt’s father and grandfather worked in the London textile industry. Hunt grew up in a home just above the textile works and even worked in the industry for two years before devoting himself to art. The drawings of the clothing designers were among the first artworks Hunt saw firsthand. This world of color and textures easily translated into the opulence of such works as The Finding of the Savior in the Temple (above, from 1860)—Hunt’s retelling of the story of the young Christ found lecturing in the temple. Many of the rich colors in Hunt’s painting copy newly developed dyes of the 1850s. (Joyce H. Townsend and Jennifer Poulin discuss elsewhere Hunt’s painstaking approach to pigments to the point of pointing out defects to the manufacturers.) Photographs of costumes Hunt designed for his models accompanying Parry’s essay as testimony not only to Hunt’s love of fashion, but also of his exacting brand of realism. Thanks to his travels in the Middle East and the Holy Land, Hunt developed a taste for exotic dress that he satisfied with costumes for himself, which allowed him to feel closer to the religious subjects centuries in the past that he painted in the Victorian present. 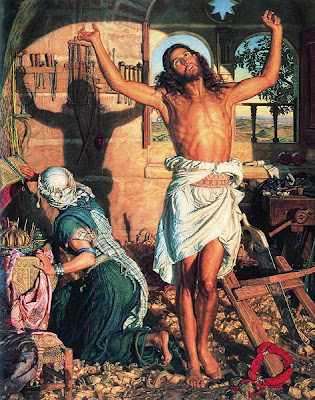 It is Hunt’s relentless search for fidelity in his depiction of matters of faith that truly sets him apart from his Pre-Raphaelite brethren. As a pilgrim in the Holy Land, Hunt identified with the plight of the Jewish people to the point of becoming an outspoken Zionist in support of the founding of a Jewish state. As Nicholas Tromans explains in “Palestine: Picture of Prophecy,” Hunt “saw himself as a kind of avant-garde Christian intellectual, looking confidently (on the whole) to the future of an ever-changing world in which a divine centre nevertheless held steady.” Neither Darwinism nor Zionism could shake Hunt’s faith. In fact, Hunt saw a continuity not only between the symbolic typology of Judaism and of Christianity but also between, as Tromans puts it, “divine revelation and modern science.” Hunt’s humanism spurs him to paint works such as The Shadow of Death (above, from 1871), which combines the realism of Hunt’s research in the Middle East with the symbolism of the cross-like shadow in the rear that horrifies the Virgin Mary. In fact, Hunt’s humanism as played out in the realistic depiction of Christ as carpenter stretching his limbs drew criticism for being too real and ignoring the divine side of the savior. In his religion, his politics, and his art, Hunt refused to draw the same lines of distinction that others did. Tromans paints a picture of Hunt the Zionist as a Victorian Bono. “Like a rock star of today seeking to shame politicians into acting on African poverty,” Tromans writes, not naming names, “Hunt’s credibility to speak [on a Jewish state] lay paradoxically exactly in his political inexperience and overt individualism.” I couldn’t help smiling at Tromans comparison, which cast Hunt, the “stodgy” “pious” Victorian in a whole new light. I almost immediately put amber, wraparound sunglasses on Hunt in my mind’s eye. 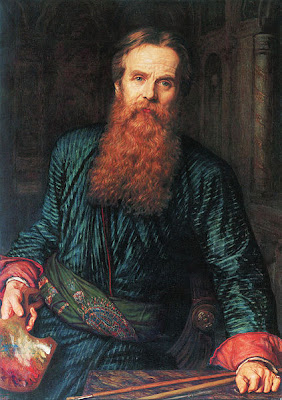 Carole Silver sums up the whole Hunt (above in his Self-Portrait of 1867) nicely: “Today we see him as a man of his era, replete with its visions and blindnesses, at times a rebel, at others deeply conventional, intensely nationalistic and filled with British imperialist ideology, yet capable of great religious and ethnic tolerance, at times patriarchal, at others somewhat radical in view of relations between the sexes.” As much recent research on the Victorian era suggests, the Victorians were never as “Victorian” as we believe them to be. They were as inconsistent, intolerant, and individualistic as any other age but perhaps slightly more conscious of the modern turn towards materialism and away from the spiritual to the point of wanting to reverse the course. In his 1867 Self-Portrait, Hunt paints himself as painter-prophet adorned in the richly colored dress of a Middle Eastern wise man while holding a palette full of colors with which he could paint his next tale of moral instruction. Holman Hunt and the Pre-Raphaelite Vision wipes away much of the false imagery of intervening discourse and takes us back to the source, lighting the path back to The Light of the World and other works to illuminate their original intent, which is invariably more interesting than the conventional wisdom handed down to us. The Victorians stood on the brink of the modern life that we continue to deal with today. William Holman Hunt and the Pre-Raphaelite Brotherhood tried to turn back the clock to the fundamentals of life and art that they believed would make the future brighter and better.

[Many thanks to Yale University Press for providing me with a review copy of Holman Hunt and the Pre-Raphaelite Vision, edited by Katherine Lochman and Carol Jacobi.]
Posted by Bob at 12:01 AM