Along with Peter Paul Rubens and Anthony van Dyck, Jacob Jordaens helped make the Antwerp school famous during its day. Born May 19, 1593, Jordaens was younger than Rubens and slightly older than van Dyck, who sandwich him in the minds of art historians today to the point of being crowded out, much as he crowded himself out in his Self-Portrait with Parents, Brothers, and Sisters (above, from 1615). Jordaens forces us to play some Dutch version of Where’s Waldo? to find him among the familial fray, and even squeezes in a pair of cherubs over his head to fill out the last empty space. The individuality of the portraits in this group recalls the touch and technique of van Dyck, whose portrait style took England by storm and continued to influence British artists centuries later. At the same time, the comedy of the crowded room, which reminds me of the “stateroom scene” from The Marx Brothers’ movie A Night at the Opera, follows the line of conventional Dutch genre painting illustrating daily life with all its ups and downs. Rubens and van Dyck walked with royalty, but Jordaens never lost his common touch, which may be why he’s become the Zeppo of the Antwerp School. 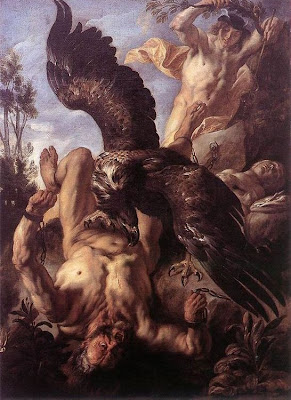 Rubens actually hired Jordaens to create larger-scale versions of some of his original designs—a common practice in the apprenticeship world of guilds. This outsourcing proves that Rubens recognized Jordaens’ talent as well as his Rubenesque style. Jordaens’ Prometheus (above, from 1640) reinterprets Rubens’ famous Prometheus Bound of 1611. First, Jordaens flips the composition of Prometheus Bound and the vulture, creating a mirror image. Next, he concentrates more on showing Prometheus’ anguish facially rather than through the contortion of his body, thus inserting a van Dyck style portrait into a Rubens. Finally, whereas Rubens left Prometheus alone on the crag to fight the vulture forever, Jordaens shows the moment at which Hermes comes to the rescue. It is almost as if Rubens was comfortable with the idea of eternal torment (perhaps reflecting an idea of man’s inherent sinfulness), whereas Jordaens couldn’t allow the story to not have a happy ending. Jordaens desire to save Prometheus falls in line with his happier view of humanity, flaws and all. 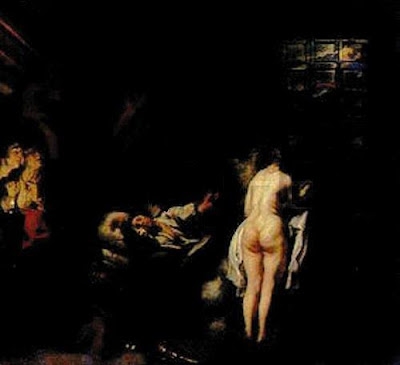 Of course, not everything is sunny in Jordaens’ world. The shadow of Caravaggio falls heavily on some of Jordaens more mysterious work, particularly the enigmatic Apparition by Night (above, undated). A young man tosses and turns in his sleep as a ghostly nude female figure walks across the room. Two women open the door to look in on the youth and their candle lights the room just enough for us to see the spectral seductress. Whereas Caravaggio’s chiaroscuro sharpened his scenes with the stark dark and light drama, Jordaens’ brand of chiaroscuro forces us to look as through a glass darkly. The nude ghost seems to walk not only in darkness but also underwater, making her murkier and more apparitional. I can’t help contrast Apparition by Night with Henry Fuseli’s Nightmare and Silence, which also muddy the visual waters to conjure ghosts in the night. Jordaens’ Apparition by Night seems almost Romantic by that association with Fuseli even though he paints a full two centuries before the “Romantic” age. Like the apparition, we see Jordaens only fleetingly in the shadows of his bigger countrymen, but wish we could see him in a stronger, more revealing light.
Posted by Bob at 12:01 AM