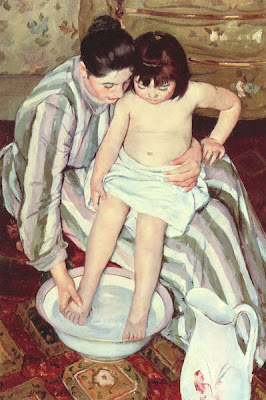 Any parent will tell you that one of the most “interesting” parts of their day is bath time. Thanks to a small armada of toy boats, Mr. Bubble, and assorted other tricks, Alex usually enjoys his bath time. After pulling my slippery three year old from the suds and wrapping him up in a dry towel, I sweep him up in my arms and hold him close to keep him warm. For that brief moment, he’s our little baby again. Although never a parent herself, Mary Cassatt painted many scenes of mothers and children during bath time. Born May 22, 1844, Cassatt met Edgar Degas and worked closely with him. Degas’ interest in the female nude in a bath setting may have spurred Cassatt’s interest in her own bath pictures, which have a more acceptably “female” approach in the motherly relationship between child and parent. Cassatt’s The Bath (above, from 1891-1892) shows the early style of Cassatt, not yet fully Impressionist yet no longer entirely the strict realism of her PAFA training. Around the time of this painting, Cassatt saw an exhibition of Japanese prints as part of the larger Japonisme fad of the age. Elements of Japonisme appear in The Bath in the diagonal of the child’s body crossing against the near diagonals of the mother’s striped dress. The flatness of much of the color also shows the influence of Japanese prints. In addition to all these styles straining against each other simultaneously, Cassatt tenderly depicts the intimacy of the mother and child at the moment that the child is the most vulnerable. 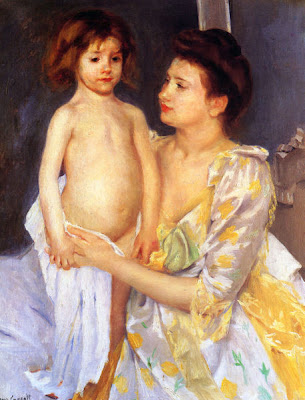 In Jules Being Dried by His Mother (above, from 1900), Cassatt depicts the next stage of the process. Degas loved to show women after the bath, especially during that awkward transition from water to dry ground. Little Jules here looks straight ahead while his mother’s eyes lock on his face with affection. In this painting, the intimacy seems almost one-sided. Cassatt paints their disconnect rather than a connection here. Little Jules is not so little anymore. He seems ready to do things for himself. Jules’ expression shows almost a kingly tolerance of his mother drying his limbs. The elaborate dress of Jules’ mother appears almost courtly rather than realistic, adding to the regal indifference of princely Jules. (I personally prefer a t-shirt and running shorts when administering ablutions.) Stylistically, Cassatt begins to turn more Impressionist. Jules Being Dried by His Mother shows an almost Renoir-like softness in the modeling of faces and bodies, an interesting divergence from the influence of Degas. Although unrealistic, the pattern of yellow and white as well as the shimmering highlights of the mother’s dress make it the star of the painting. 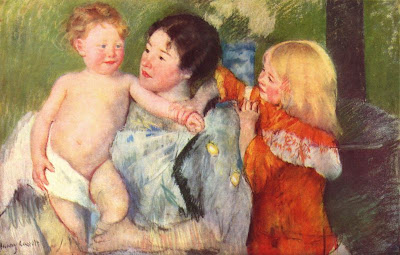 In After the Bath (above, from 1901), Cassatt copies the gestural pastel technique of Degas in the parallel lines that make the picture almost seem to move. Degas allowed himself to grow bolder and bolder in this technique to the point that the bathers or dancers in the work became almost superfluous to the technique. Cassatt, however, continues to center the image on the relationships of the subjects. In After the Bath, Cassatt returns to the intimacy of mother and child, but with the added twist of a love triangle formed by the presence of an older sibling. Sigmund Freud and his idea of sibling rivalry developing from the Oedipus complex were not yet mainstream ideas, but any student of human nature such as Cassatt instinctively knew that siblings will fight among themselves for more face time with parents. Is the older child’s grip on the baby’s wrist a gesture of affection of an attempt to break the contact between baby and mother? The painting doesn’t offer any clues as to motivations or final outcome but does allow for the possibility of connection or conflict. As a woman, Cassatt felt limited in her range of subjects. Painting in the acceptable genre of bath time, Cassatt could subversively explore avenues in the human heart that exist at every age.