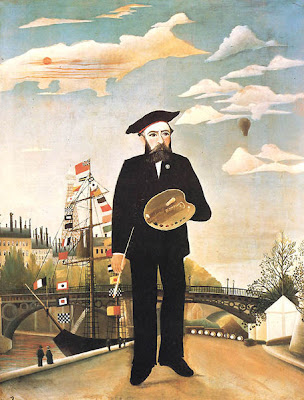 Henri Rousseau, better known by some as “Le Douanier” or “The Customs Officer” (his occupation until his retirement in 1893), painted in obscurity during his lifetime but is known well today for his mysterious, almost childlike paintings of wonder such as Sleeping Gypsy and The Snake Charmer. Born May 21, 1844 in the Loire Valley, Rousseau’s most famous works present a strange jungle world, yet he himself inhabited the urban jungle of Paris for most of his career. Rousseau’s Self-Portrait of 1890 (above) shows him situated in a civilized setting, yet still retains the simplicity and unstudied charm of his other works. During his lifetime, Rousseau withstood the ridicule of other artists who couldn’t understand his primitive style. However, Jean-Léon Gérôme, an academic painter himself, gave tips to his friend Rousseau as “Le Douanier” pursued painting past the point of being a hobby into a true outlet for his unique perspective. As much as I love Rousseau’s dark jungles, I find it equally fascinating how he applied his unique vision to the real world around him, spying modern wonders with that same childlike fascination. 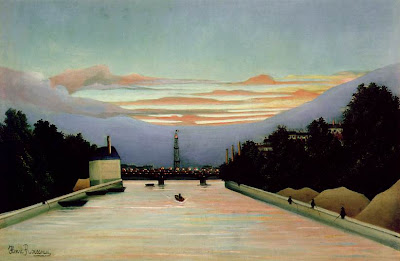 When Rousseau painted The Eiffel Tower (above, from 1898), Gustave Eiffel’s colossus was less than a decade old. Anyone who has visited Paris has some visual memory of the tower, either from a vantage point in the city or, if you’ve taken the ride up, from above, looking down upon Paris itself. The Eiffel Tower anchors Paris like a lighthouse shining its beacon to guide lost travelers home. With that powerful effect in mind, it’s fascinating that Rousseau chooses to literally cut the Eiffel Tower down to size in a painting named after it. He reduces the landmark to the size of a gift shop replica hanging from a key chain. Instead, the waterways of Paris dominate the scene as the Parisians who work the banks go about their daily jobs. Rousseau flips the idea of importance on its head in this painting. All adults “know” that the Eiffel Tower is the most “important” thing in this painting, but children don’t know such things. Children visually value the waterways and the workings of the people just as much, if not more, as Rousseau tries to show in this painting.

Before his death in 1910, Rousseau got to witness the advent of powered flight, which began with the Wright Brothers first flight in 1903. In View of the Bridge at Sevres and the Hills at Clamert, Saint Cloud and Bellevue (above, from 1908), Rousseau paints a Wright Brothers-style plane sputtering across the sky. Nearby, a type of dirigible flies. The early twentieth century saw a “golden age” of blimps and dirigibles. Races were even held above Paris using the Eiffel Tower as a turning stake. In the distance between the plane and the dirigible, a hot air balloon floats. The first manned balloon ride happened in Paris in 1783 in a contraption built by the famous Montgolfier brothers. Rousseau’s arrangement of these three flying machines suggests the advent of the plane and blimp and the decline of the hot air balloon technologically. (Thomas Eakins’ 1871 Max Schmitt in a Single Scull creates a similar hierarchy by showing older, slower watery craft in the distance behind the Schmitt’s sleek racer.) To Rousseau’s old, yet young eyes, these new flying machines must have seemed magical. Critics credit Rousseau for opening up avenues of seeing that paved the way for the Surrealists, but in his more “real” works of wonder, Rousseau showed us more importantly the value of seeing as a child sees and recognizing the magic all around us every day.
Posted by Bob at 12:01 AM