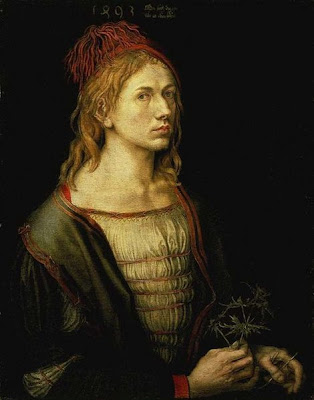 The long and often tragic history of Germany is tied up in large part with an identity complex. Like many European countries, the idea of Germany as a country with clear borders is a relatively modern one. Wars and kingships have moved borders back and forth so often that what was German land and what wasn’t remained an enduring question. In the late nineteenth century, Germany tried to fill this identity void by creating truly Germanic heroes. In the world of art, Albrecht Durer was crowned the first and truest German superstar. Born May 21, 1471, Durer brought the Italian Renaissance north, where it became the Northern Renaissance. Yet, just as Germany itself was a work in progress, Durer had to grow into his superstardom. The Self-Portrait of 1493 (above) shows the 22-year-old Durer at the beginning of his career, just starting to travel across Europe to accrue the mixture of influences that would inspire his mature work. Durer painted this self-portrait in Basel and shipped it back to his intended back in Nurermberg, writing “Things with me fare as ordained from above” at the top of the picture. From the very beginning, Durer sensed his fate was in God’s hands. 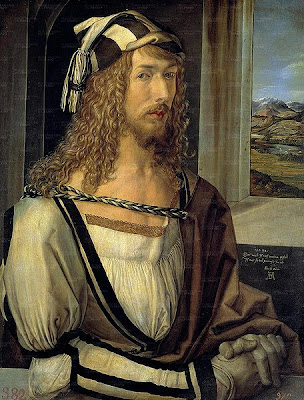 Just five years after painting the awkward Self-Portrait of 1493, Durer paints the self-assured Self-Portrait of 1498. Durer now sits up straighter than before. Whereas the 1493 portrait is isolated, the 1498 portrait includes a window onto the world. Durer had just returned from Venice with the Italian Renaissance still fresh in his mind. The world had literally broken wide open for Durer in the span of just five years. Legend has it that Durer’s dog barked and wagged his tail upon seeing the 1498 portrait for the first time, fooled into thinking it was actually his master. The realism of this portrait as well as the opulence of the clothing Durer wears show that Durer had mastered the techniques of the Renaissance masters and was turning a fine profit for himself. Yet, Durer remains turned slightly away, as if he can’t yet bring himself to face the viewer full on. His mission was not yet complete. 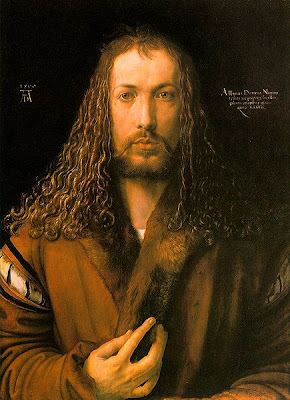 In the final painted Self-Portrait of 1500 (above), Durer faces the viewer directly in total confidence of his powers. He wears kingly clothing and his hair cascades down like a lion’s mane, proclaiming him the king of the German cultural jungle. Durer assumes visually the mantle of the King of Kings, Christ himself, in this final self-portrait not out of blasphemous braggadocio but instead to illustrate how the artist imitates God himself in the creative act. If imitation is the sincerest flattery, Durer imitates Christ to praise him as the source of all artistic and creative power. In a 1522 drawing, Durer lent his features to Christ again, but this time as the Man of Sorrows instead of Christ triumphant. As age began to take its toll on Durer, he identified increasingly with the Suffering Servant side of Christ’s story, recognizing that his ascension to the rank of creator had ended. Of all the artists in different media adopted by the Nazis at the apex of German nationalism, Durer and perhaps Beethoven seem to be the two left untainted by that association. As the German Expressionists recognized (especially Ernst Ludwig Kirchner, who fashioned himself a modern-day Durer through his own self-portraiture), the stellar light of a superstar such as Durer can never be tarnished by mere mortals.
Posted by Bob at 12:01 AM

nice piece. "superstardom" is an intriguing development, and i think you make some very interesting points here. widespread dispersion of artworks seems to have had such a great effect in this time.

I cannot believe the amazing timing of your post, Bob.

Today I used Durer's 1498 self portrait in a lecture, to illustrate how fabulous pictures were "acquired" by Charles I and later "acquired" by Philip IV of Spain.

Between 1620 and 1660, no art collection could ever be fixed, safely, in one site. Even the delectable Durers could be bought, looted by an army, given as a present, sold off by a later Parliament or traded for a different commodity.