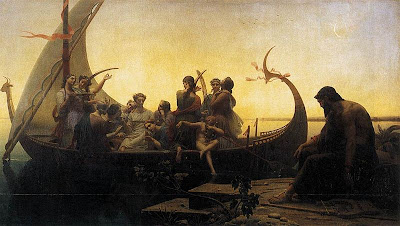 Born May 2, 1806, Charles Gleyre fills perfectly the definition of a late bloomer. Born in Switzerland, Gleyre moved to France as a small child after the death of both of his parents. After a few years of art school, Gleyre rambled through Italy to drink in the Renaissance before spending six years in Greece and the Middle East, including Egypt and Syria. While on this vision quest, Gleyre contracted ophthalmia, an inflammation of the eye that threatened his eyesight for the rest of his life. Gleyre, however, waited until his return to Paris to begin creating art based on all that he had seen. Gleyre’s Evening (later re-titled Lost Illusions; above, from 1843) won an exhibition medal and, more importantly, recognition from the art world. Remembering a dreamy evening he spent on the bank of the Nile River in 1835, Gleyre paints himself as a lyre-wielding poet watching a boatload of muse-like singers float away. Although Gleyre dipped often into his mental storehouse of Orientalist imagery, he had a clear-eyed view of the work of the artist and worked with a pragmatic single-mindedness that became legendary. 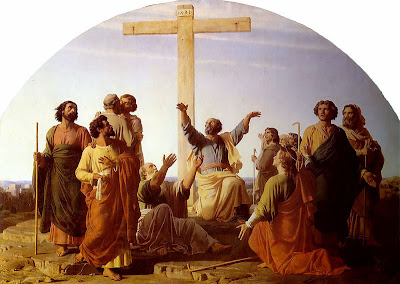 When Gleyre’s teacher, Paul Delaroche closed his teaching studio in 1843, he recommended that his students continue on with Gleyre as their teacher. Gleyre ushered in a golden age of the French atelier that would continue with the next generation of Jean-Leon Gerome, Leon Bonnat, and others. From 1843 through 1864, when Gleyre’s eye problems forced his retirement, great artists such as James Abbott McNeill Whistler, Claude Monet, Pierre Auguste Renoir, Frédéric Bazille, and Alfred Sisley studied under Gleyre, yet he never took a fee for teaching. Whereas other teachers try to create disciples molded in their own image, Gleyre imparted to his students a seriousness of purpose in the art life rather than a specific style of painting. Renoir loved Gleyre specifically for the free hand he gave to his students—allowing the young Impressionists to paint outdoors while he preferred working in the studio from memory. Gleyre’s Separation of the Apostles (above, from 1845) perfectly captures this sense of teaching and trusting that students will find their own way. 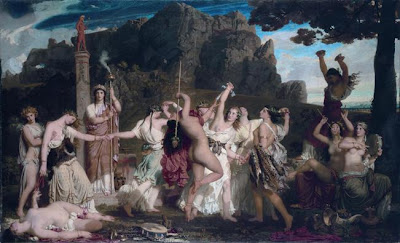 Gleyre lived an almost monk-like existence. He never married and actually saw marriage as an impediment to the careers of other artists. Gleyre literally married his work. Despite the sensuality of such works as La Danse des Bacchantes (above, from 1849), Gleyre was reportedly celibate his entire life. For him, the flesh painted on the canvas in mythological scenes always remained a myth, an unfelt abstraction. Gleyre earned a reputation for perfectionism that many of his students took away from his atelier. The way that Gleyre returned again and again to the same works can be seen, for example, in Monet’s obsessive series of water lilies, haystacks, cathedrals, etc., etc. Gleyre and Monet differ widely in style, but their commitment to depicting a personal vision is exactly the same. Like Michelangelo, one of Gleyre’s Renaissance heroes, Gleyre’s only secret was hard work, free of illusions of an easy life in art.
Posted by Bob at 12:01 AM

..."Stand up for what you believe in-even if it means standing alone."