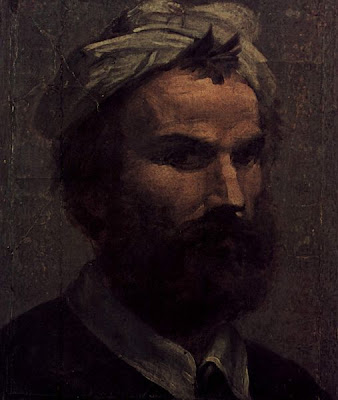 Any adult who has received a Catholic education and survived will have plenty of “interesting” stories to tell of the more mystical or, as we liked to call them, weird aspects of the faith, which were usually remnants of the theology born during the time not so affectionately known as the Dark Ages. (They prefer the Middle Ages now.) Domenico di Pace Beccafumi, better known simply as Il Beccafumi, died on May 18, 1551, as the Dark Ages were giving way to the enlightening humanism of the Renaissance. Born 1486, Beccafumi, whose name translates roughly as “catching smoke,” painted the dark, smoky Self-Portrait above around 1525, at the height of his career. Little did he suspect that he was one of the last of his kind, the last of Mannerist painters of the Sienese School of Il Sodoma and others. For modern art lovers, the Florentine School stretching from Giotto to Michelangelo and Botticelli overshadows the work of their Sienese cousins, but the art of the Sienese Mannerists, particularly that of Beccafumi offers us a glimpse of the medieval Catholic mind. 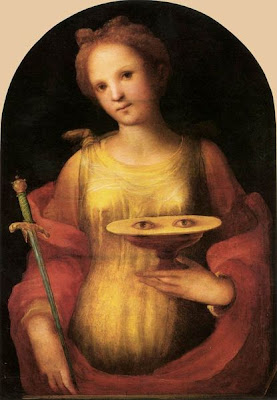 Perhaps the most repulsive of all the torture-centered saints is Saint Lucy (above), painted by Beccafumi in 1521. It was common to portray saints with some token of the method of their martyrdom. Even Michelangelo’s Last Judgment shows several saints in the circle around Christ brandishing the weapons of their own destruction. Because legends has it that Saint Lucy’s eyes were gouged out before her execution, she is often shown holding her eyes. Because she’s holding the eyes, or other times (as here) displaying them on a plate, while the eyes in her head are restored, I was confused as a child as to whose eyes she was actually serving up for our viewing, uh, pleasure. The gruesomeness of this imagery emphasized the physicality of the saint’s suffering to a mostly illiterate church-going population. In an age of plagues and all-around short life expectancy, suffering was the common coin of life, the language people understood easiest. Saint Lucy’s eyes to my modern eyes seemed grotesque, whereas the eyes of a sixteenth-century boy may have recognized them as par for the course. 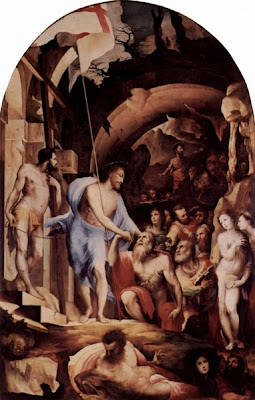 It’s hard for us to step into the shoes of Beccafumi and think like him and the people he worked for because we live in a post-Renaissance, humanist world (or at least like to think we do). We just don’t see ourselves as fallen into sin as Beccafumi’s time did. Beccafumi’s Christ in Limbo (above, from 1530-1535) shows Christ’s Harrowing of Hell during the time between the Crucifixion and the Resurrection. Today, the idea of Christ’s Harrowing of Hell and his visiting of the good, but unbaptized souls relegated to Limbo seem politically incorrect in our polytheistic world. Beccafumi might have sensed the unfairness of this doctrine of the early church by sympathetically portraying the souls approaching Christ and asking for redemption. Beccafumi unbalances the composition by outweighing Christ on the left with the abundance of dead on the right. Christ’s expression mixes both compassion and almost surprise at how death had undone so many. Yet, in Beccafumi’s world, rules are rules. Christ’s crucifixion opened the gates of Heaven for the Old Testament saints awaiting that redemptive moment, but for the unbaptized remainder, nothing could save them from a life of aimless limbo. My bleeding liberal’s heart would have made me a bad Medieval man, but I really should judge Beccafumi’s theology since I don’t know how I would have acted in his time and place. Beccafumi’s art is truly a glimpse into another worldview at the near the very end of its reign.