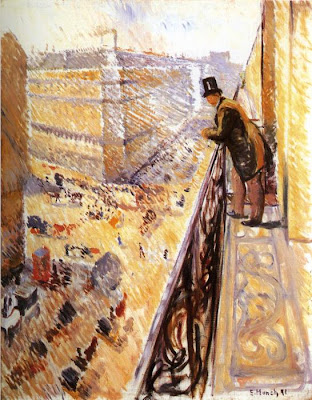 When most people hear the name Edvard Munch, the immediately see The Scream in the mind’s eye, as if it were Munch’s own face crying out in front of a blood-red sky. All biography of Munch seems to be psychobiography. Comparing Munch’s reception with that of Claude Monet, Jay A. Clarke in his Becoming Edvard Munch: Influence, Anxiety, and Myth writes, “Munch’s typecasting as an unbalanced genius has encouraged historians to consider his work as emotional biography, whereas that of the more ‘stable’ Monet has been viewed formally, as so many layers of paint.” In his book accompanying the Art Institute of Chicago’s exhibition of the same name, Clarke not only recovers the lost history of how Munch became Munch, but also shows the role that Munch himself played in creating that persona. Munch “was perpetually considering his legacy and, wanting to be perceived as a true original, did his best to expunge suggestions that he might have had artistic models of his own,” Clarke argues. “Munch anxiety of influence reaches at once back in time and into the future, on him as the center and from him to the margins, manifesting itself in ways political, psychological, social, and most of all visual.” Munch’s highly Impressionistic Rue Lafaette (above, from 1891), a direct quotation of a work by Gustave Caillebotte’s A Balcony, Boulevard Haussmann, is just one of the many traces Munch and complicit critics covered over in his personal mythmaking that Clarke uncovers to recover a fuller picture of the complete artist who was Edvard Munch. 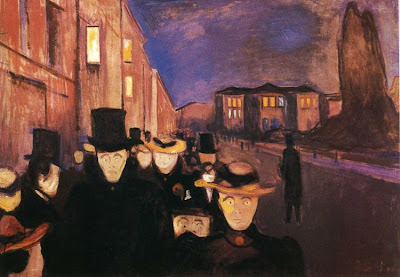 Munch seems to transcend category because he belonged, however fleetingly, to so many of them: Impressionism, Naturalism, Romanticism, Symbolism, Expressionism, etc. Throwing all of these influences into his melting pot, Munch cooked up his special blend of personal vision. Munch “recast epics and existing mythic vocabularies in his own idiom,” Clarke explains, “and while these sources are not always obvious, they are a subtle visual presence.” For example, Munch’s Evening on Karl Johan Street (above, from 1892) marries the Impressionist street scene with a Norwegian subject while also adding the new Symbolist touches Munch may have seen in James Ensor’s work. In a separate section, titled “Individual Works: Tracing Influence from [Anna] Ancher to [Anders] Zorn,” Clarke encyclopedically and alphabetically lays out not only the names of artists who may have inspired Munch in some way but also the specific works that Munch might have seen and those works by Munch that may have developed from them. Familiar and obvious names such as Van Gogh, Gauguin, and Cezanne stand next to less familiar Scandinavian influences such as Eilif Peterssen and Frits Thaulow. Seeing how Munch’s Madonna took shape in Munch’s mind following encounters with Franz von Stuck’s Sin and Dante Gabriel Rossetti’s Beata Beatrix doesn’t diminish Munch’s accomplishment in the least. In fact, it makes it seem even more amazing as he navigated such visually cluttered waters while charting a course of his own. Unfortunately, the demands of the time were for true originality, and Munch would do anything to meet those demands. 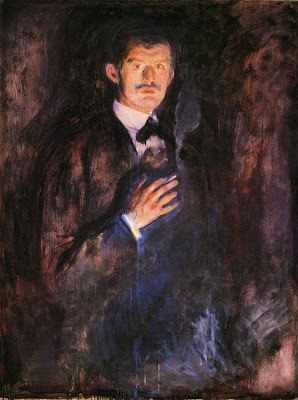 After bumping up against influence after influence, including a nationalist Norwegian movement that longed to claim Munch among its own, Munch’s “art was neither French nor Norwegian, neither Impressionist nor Symbolist—the autonomous stance he took was calculated, defiant but very much of the moment,” Clark writes. “The ‘insane’ Munch… was a product—one introduced both by hostile and friendly critics and later packaged and presented by the artist and his early biographers in a very deliberate way.” In his Self-Portrait with Burning Cigarette (above, from 1895), Munch paints himself as he wishes his to be seen—a bohemian artist smoking like all the “cool kids” whose very image is a murky, instable thing that threatens to fall apart. As his unstable reputation grew, Munch played to that audience, giving them exactly what they wanted. Yet, Clarke argues, “while [Munch] wore his strangeness and insanity like a mantle in the wider world, he inhabited quite a different person in private.” Munch knew which works would spark controversy and which wouldn’t and carefully orchestrated exhibitions of his work to fulfill the expectations of the viewing public. Even when Munch finally sought professional help during the famous mental breakdown of 1908, he personally took care of the business side of his art. Art historians love to sever artists from all ties to the real world, but Clarke’s study restores those ties and recovers Munch the shrewd businessman and curator of his own oeuvre. Some may turn away from the idea of a great artist concerned with filthy lucre, but I personally enjoyed the way Clarke deconstructs the myth of Munch to resurrect Munch the man in control of his world despite the very real personal anguish that played a part, but not an exclusive part, in his art. 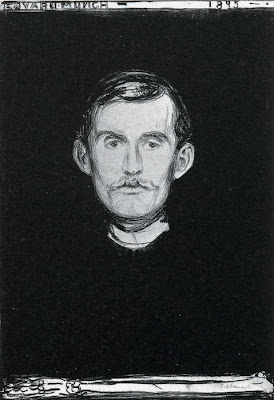 Clarke really focuses on Munch the marketer in his exploration of Munch’s printmaking. In the same year as Self-Portrait with Burning Cigarette, Munch created a print titled Self-Portrait with Skeleton Arm (above, from 1895). The murkiness is gone, replaced by a deathly black void behind Munch’s disembodied head. A skeletal arm rests below the face, while Munch’s name appears above in tombstone-style script, completing the Halloween-like calling card. Munch knew that macabre sold well and ventured into printmaking to expand his product to markets different from those who could buy expensive oil paintings. “Munch carefully and strategically anticipated market trends and absorbed other artists’ technical tricks while simultaneously elaborating and expanding his own repertoire of images,” Clarke concludes. Munch used different printmaking processes, colored papers, colored inks, the different grains of wood, and even developed jigsaw-like assembled blocks to print multicolored prints all in the name of creating new, must-have images for the collector. As Clarke shows, even when Munch seems his weirdest in terms of subject matter, he always remains within some contemporary trope, such as Munch’s recasting of Rodin’s The Kiss as his print The Kiss. 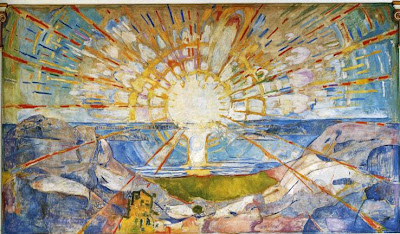 As much as possible, Clarke’s Becoming Edvard Munch allows us to see the “sunny side” of Munch, in works such as Munch’s The Sun (above, from 1911-1916), part of his Oslo University Aula decorations. Munch intended for his work to show the whole gamut of human experience, from birth to death with all the love and angst between. Munch’s mythmaking has effectively erased much of the more hopeful side of his work, leaving us with only half of the total picture, and the dark half at that. The Sun represents just one of many late scenes of regeneration, specifically the idea of heliotherapy en vogue at the time. After “taking the cure” at a spa, Munch grew fascinated by the idea of regeneration and recreation of the self by different means. In Becoming Edvard Munch, Clarke cures the diseased popular caricature of the “mad” Munch and recreates the living artist as a thinking visionary always in control of his art regardless of the madness marketed in the art itself.

[Many thanks to Yale University Press for providing me with a review copy of Jay A. Clarke’s Becoming Edvard Munch: Influence, Anxiety, and Myth.]
Posted by Bob at 12:01 AM

it's a very beautiful blog.thank you.
http:/www.raininghollywood.com