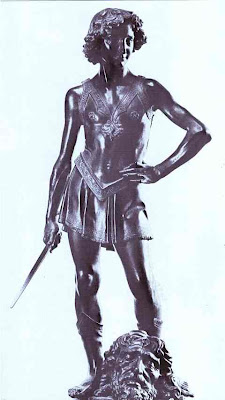 As a young apprentice to Andrea del Verrochio, Leonardo da Vinci was as famous for his artistic talent as for his personal beauty. Born April 15, 1452, da Vinci seemed like an angelic figure straight out of the Bible, which led Verrochio to use him as the model for his statue of David (above, from 1473-1475). As David, the young da Vinci stands triumphant over the decapitated head of Goliath, just as within a decade or two he would stand triumphant over the artistic and scientific worlds of Florence. More than five hundred years later, we still find ourselves fascinated by the persona of da Vinci, who seems more divine than human. One of my favorite episodes of the original Star Trek series, titled "Requiem for Methuselah," featured a character named Flint, who was immortal and had been several famous figures throughout Earth history, including da Vinci. It was as good an explanation as any for da Vinci’s magical capacity to appear as a being from another world and time. Just as Leonardo took the measure of man in his iconic drawing known as the Vitruvian Man, other artists have tried to take the measure of da Vinci throughout the centuries.

Even during his lifetime, da Vinci stood at the head of the class. When Raphael painted his School of Athens in 1511, he chose to use da Vinci’s face for that of Plato (detail above). Raphael used the likeness of many contemporary artists for The School of Athens, including his own and that of Michelangelo, but Raphael set Leonardo as Plato center stage. Plato points up to illustrate his philosophy based on the abstract world, whereas Aristotle beside him points down to the Earth, the source of his thinking. Leonardo might also be seen as pointing home considering how heavenly his contemporaries saw him. In his Lives of the Artists, Giorgio Vasari wrote of Leonardo thirty years after his death in glowing terms that robbed him of all humanity, thus helping establish the magical aura surrounding da Vinci ever since. Vasari ranks Michelangelo as the apex of artistry, but Leonardo comes a close second. In fact, it might be this divine quality of da Vinci’s that earns him the silver medal, whereas Michelangelo’s sweat and toil helped bring him the gold. As with all depictions of genius, it’s easy to think that Leonardo’s gifts were heaven sent and came easily to him. We fail to see all the hours of thought and observation that went into the ability to paint the Mona Lisa and The Last Supper. 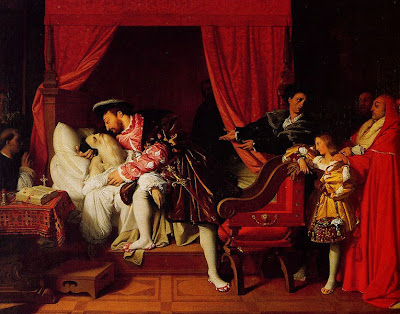 Unhappy with the treatment he was receiving in Italy, Leonardo left for France near the end of his life. Francis I adopted Leonardo as a kind of pet—the resident genius who would amuse the court. (Leonardo brought the Mona Lisa with him to France, which is how it became the property of France rather than Italy.) When Leonardo died, it only added to the myth. Although it probably didn’t play out that way, artists depicted Leonardo’s final moments as the final bow of blood royalty to the true royalty of genius. In Jean Auguste Dominique Ingres’ 1818 version of The Death of Leonardo (above), Francis I tenderly embraces the withered da Vinci taking his last breath. We still pay homage to Leonardo today, from the Teenage Mutant Ninja Turtles to The Da Vinci Code. In addition to being among the greatest minds of all time, da Vinci belonged to the greatest procrastinator club, leaving countless projects incomplete and ideas unfulfilled. Even at a ripe old age, Leonardo’s presence spoke of possibility, albeit often unrealized. That possibility still attracts all eyes to him.

What is the firm evidence that Verrochio used da Vinci as the model for David? Its a nice thought.

I have the same question as Kim. I'm a fan of Verrochio's work and I've never heard that before. If you could cite a source that would be really interesting.