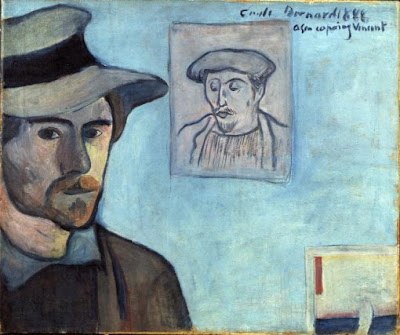 There are those who are called to greatness and those who are called to stand next to greatness. Although a fine painter in his own right, Emile Bernard is best known for befriending bigger stars such as Van Gogh and Gauguin in their heyday and Cézanne in his twilight years. Born April 28, 1868, Bernard painted Self-Portrait with Portrait of Paul Gauguin (above, from 1888) in the midst of their close friendship and professional association, both of which would later fall apart under unhappy circumstances. In 1888, Van Gogh and Gauguin lived briefly together in a tempestuous artists’ colony that concluded with Van Gogh’s infamous ear-cutting incident. Bernard often added another side to that relationship, forming a triangle in which Bernard would incorporate different elements of Van Gogh and Gauguin’s work into his own. His admiration for Gauguin mirrored that of Van Gogh’s, perhaps setting Gauguin up on a pedestal that he never asked for and longed to come down from. That Bernard painted this self-portrait and portrait combination in Gauguin’s own style makes the work both a fitting tribute and almost a scary stalker’s love letter. 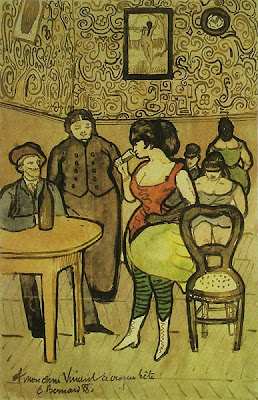 Bernard painted a different kind of “love letter” for Van Gogh—his Brothel Scene (above, 1888), which he dedicated to Van Gogh in the corner. Clearly, Bernard and Van Gogh shared an intimate relationship in which they both freely walked on the wild side. Van Gogh loved to talk shop with Bernard, filling his letters to Bernard with references to Goya, Velazquez, Rembrandt, Vermeer, Hals, and other greats. “It is possible that these great geniuses are only madmen, and that one must be mad oneself to have boundless faith in them and a boundless admiration for them,” Van Gogh confesses to Bernard with eerie foreshadowing. “If this is true, I should prefer my insanity to the sanity of the others.” The insights shared between Van Gogh and Bernard in their letters rank second only to those shared between Vincent and his brother Theo in letters by Van Gogh that survive. Bernard deserves a lot of credit for recognizing the value of Van Gogh’s work when others shied away from both his style and his personality. 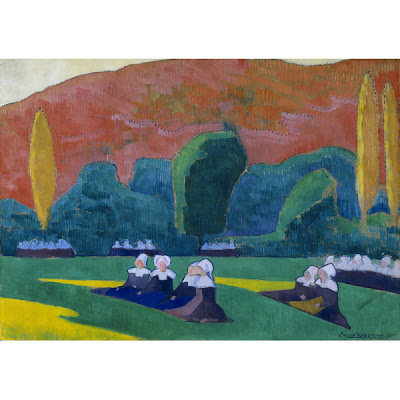 Unfortunately, the Arles circle eventually broke up, first between Van Gogh and Gauguin and later between Gauguin and Bernard. Bernard continued to paint in a “Gauguin-like” style with “Gauguin-like” content in works such as Breton Women at Prayer (above, from 1892), but Bernard began to challenge Gauguin as to how much Gauguin had taken from him. Bernard claimed that the cloisonnism technique of clearly outlining the contours within a painting was his and not Gauguin’s idea initially. By this time, Bernard had also been talking closely with Cezanne. Unfortunately for Bernard, the threat of being drafted into the French military forced him to flee to Egypt, where he remained for the next ten years. Separated from the maelstrom of French art at the beginning of the twentieth century, Bernard has also been erased from many histories of that period. In many ways, Bernard is the Vasari of Post-Impressionism—an artist brilliant enough to recognize genius in others but not brilliant enough to create art on the same level. Bernard’s good connections, however, will always keep his name linked with that of Van Gogh and Gauguin and that brief shining moment in 1888.
Posted by Bob at 12:01 AM

"Gauguin-like style!" Your assessment of Bernard is so far off the mark it is scary!

Bernard was an outrageously talented child genius who at the age of 20 years created the "cloisonnisme" that Gauguin would use to revolutionise art in his "Vision after the sermon." In fact, this apparently seminal work took both it's composition and radical painting technique from Bernard's 1888 "Breton women in the meadow." Gauguin swapped one of his works for "Breton women in the meadow" then sent it to Van Gogh who declared it "masterful" and immediately copied it. Bernard was streets ahead of both Gauguin and Van Gogh. He was never given credit for it by either of them or from the wider artistic community and it bothered him (rightly so) his whole life. For me, if there was a genius between the 3 of them it was Bernard. Until he met Bernard Gauguin was still labouring under the influence of Pissarro and he simply would not have become the painter he did without Bernard.

These copied "stalker" self portraits were Van Gogh's idea, he wanted to alleviate his solitude by keeping in constant contact by exchanging paintings in the manner of Japanese artists who often sent work to one another. Gauguin, Van Gogh, Charles Laval and Bernard all created works.

That's very interesting about Bernard, although I'm not sure I agree. If Gaugan and Van Gogh developed his ideas, don't they deserve some credit?

Anyhow, a flash of genius at twenty does not a career make.