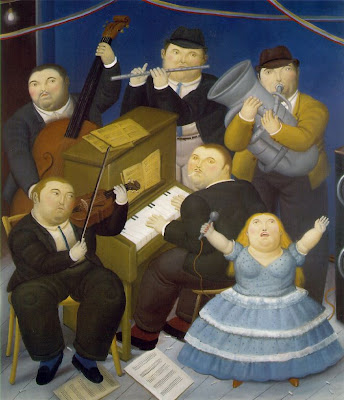 What Amedeo Modigliani is to necks, Fernando Botero is to bodies. Born April 19, 1932, Botero inflates his figures with the same freedom with which Modigliani elongated esophagi. Modigliani drew his inspiration from African tribal art, but Botero took his inspiration from the Baroque style of the Catholic churches of his native Columbia. The religious fervor of almost Medieval Catholicism still active in twentieth century South America not only preserved a macabre, bizarre style but also fostered in Botero a love of manipulating the human body for ends both serious and humorous. Botero’s The Musicians (above, from 1991) shows how he puffs up his people almost into cartoon characters. By inflating them this way, Botero deflates any sense of self-importance in the figure. He pokes fun at authority with every balloon-like visage. Critics try to burst Botero’s balloon with accusations that he’s not a “serious” artist, in every sense of the word. Such critics, however, willfully ignore Botero’s great range of comedy to tragedy that mirrors the double-sided coin of Columbia itself with its long, colorful history and sad, violent, drug-dealing present.

Perhaps art critics and historians take aim at Botero because he takes aim at them first, specifically by poking fun at great artists of the past. Botero’s blown up Mona Lisa is a laugh riot, a visual embodiment of the overblown hype surrounding the original. Botero’s Mademoiselle Riviere, after Ingres (above, from 2002) is a send up of the super-serious Jean Auguste Dominique Ingres, one of the most humorless artists of all time, at least to me. Ingres’ original belongs with his many other portraits of super-self-important people posing without an ounce of humility or restraint. Ingres painted Napoleon on his throne, but Botero wants to knock the emperor and his image-maker off it. Of course, Botero studied all of these great artists obsessively during his youthful studies and travels in Europe. His attacks are more affectionate than iconoclastic. By showing these works of art puffed up, Botero tries to restore the humanity hidden by the hype of art history. Botero wants comrades rather than deities, and pulls them down to his level—in a good way. 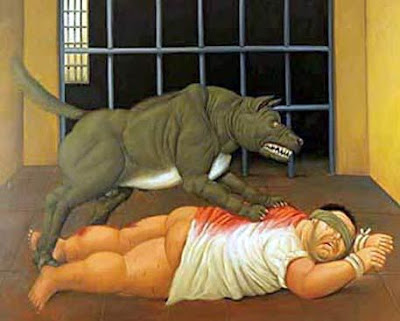 Like any great comedian, Botero is also a great social commentator. When other artists shied away from the idea of painting the atrocities of Abu Ghraib, Botero made use of the notorious photographs almost immediately. His painting above (from 2003) belongs to a suite of works that document the atrocities in almost too graphic detail. Botero’s use of his signature inflated figure style helps soften the cruelty somewhat but also harks back to the bloody side of his Baroque Catholic upbringing. The victims of these abuses become bubble-faced Christs tortured on a modern cross equivalents. Botero took a great deal of heat for painting these works and actually had much difficulty finding venues in America to display them. The political climate couldn’t (and still can’t) fully come to grips with the implications of those images, especially interpreted through the penetrating eye of an artist with Botero’s sense of both dark humor and social justice. Perhaps as time passes these images will find a place in the museums and, eventually, the art history canon as the twenty-first century’s version of Goya’s Disasters of War. Whether Botero would allow himself to become part of history unremarked remains a different story.

It’s so nice site. We love to see more on this site. Keep on updating… MonkAreRee Bali ***degfvtg