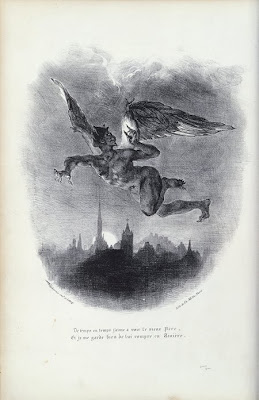 Like any good Romantic artist, Eugene Delacroix drew his inspiration from many sources of his time, including classic Romantic (or Romantically interpreted) literature. Born April 26, 1789, Delacroix did seventeen illustrations for Albert Stapfer’s 1828 French translation of Goethe’s Faust. Delacroix’s Mephistopheles in Flight (above, from 1828) shows the devil flying through the night sky above the sleeping city. “I like to see the Old Man now and then,” Mephistopheles says, referring to God, with whom he has just met, “and take good care to keep on speaking terms.” Delacroix was on more than just “speaking terms” with the familiar tropes of the Romantic movement, including the seductively attractive Mephistopheles of Goethe’s masterpiece as well as the doomed doctor of the title. The sense of great movement in Mephistopheles’ flight and the loving attention paid to his wings make you almost overlook the wonderful sense of depth Delacroix achieves in his depiction of the city upon which the sun is about to rise. This is the first of the seventeen images Delacroix created for the story and grabs you immediately with it’s otherworldly charm. 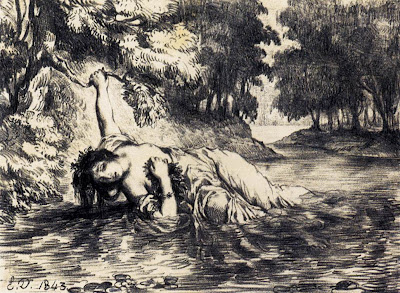 For the Romantics, regardless of nationality, William Shakespeare became an honorary member of their circle. Keats never traveled anywhere without a picture of Shakespeare to hang above his desk. The early nineteenth century saw a renaissance of Shakespearean acting and performance. On a trip to London in 1825, Delacroix saw the great Edmund Kean play the lead in Richard III. In 1827 in Paris, Delacroix watched Charles Kemble play the lead in Hamlet, with Harriet Smithson in the role of Ophelia. Hector Berlioz attended that same performance and was so taken with Smithson as Ophelia that he began obsessively wooing her over the course of several years, even writing his Symphonie Fantastique for her, which helped him win her hand in 1833. Smithson and Ophelia lingered in Delacroix’s mind as far as 1843, when he published a series of thirteen lithographs based on Hamlet, including The Death of Ophelia (above). The same naked eroticism of Smithson’s performance that attracted Berlioz finds its way into Delacroix’s print. Delacroix twice painted the theme of Ophelia’s death, showing that he never felt he could satisfyingly depict the pathos and eros of the scene. 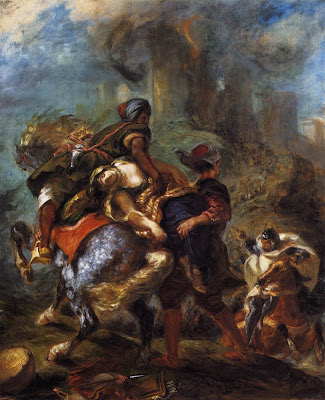 Delacroix’s The Abduction of Rebecca (above, from 1846), which shows a scene from Sir Walter Scott’s novel Ivanhoe falls right into Delacroix’s sweet spot. Scott has two Saracen slaves of the Christian knight who has lusted for Rebecca carry the beauty off on horseback. "Delacroix was passionately in love with passion,” Charles Baudelaire once wrote, “but coldly determined to express passion as clearly as possible." Despite the amazing contrasts of light and dark, motionlessness and action, color and colorlessness in this painting, Delacroix keeps it all together in a neat package full of meaning without overflowing into chaos. Ingres set himself up as the neat freak Neoclassical foil to his contemporary Delacroix’s “messy” Romanticism, but there’s nothing messy about Delacroix ability to convey meaning. If anything, Delacroix takes the raw material of Scott’s story and amplifies the drama without crashing into cacophony. Delacroix the reader and Delacroix the playgoer helped make Delacroix the painter the great artist we know today.
Posted by Bob at 12:01 AM