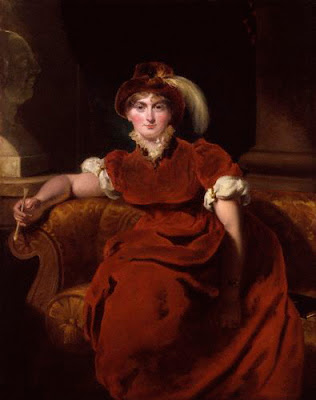 I got a lot of funny looks when I gushed over a portrait by Thomas Lawrence while attending a wedding last November. In an upstairs gallery of the mansion where the wedding took place, a portrait by Lawrence that I had never seen stood beside examples by Joshua Reynolds, Thomas Gainsborough, and Allan Ramsay, reuniting the four greatest British portraitists of the late eighteenth and early nineteenth century. Born April 13, 1769, Lawrence may have been the most talented of the bunch, a child prodigy who started drawing pastels of the patrons of his father’s inn and rose to become painter to first King George III and later King George IV . Lawrence’s portrait of Caroline Amelia Elizabeth of Brunswick (above, from 1804) shows the future queen consort of George IV in younger days. Lawrence alludes to her troubled marriage to the wild Prince Regent by placing her left hand, upon which she wore her wedding ring, in dark shadow. The full extent of Caroline’s marital woes most likely reached Lawrence’s ear during sittings for many portraits over the years. Rumors persist that Lawrence and Caroline even carried on an affair. If so, it was just another self-destructive behavior for Lawrence, who allowed alcoholism and financial irresponsibility to limit how far he could take his gift. 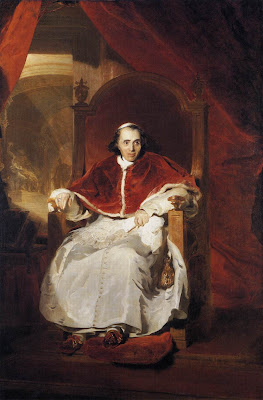 After the defeat of Napoleon in 1815, the Prince Regent IV commissioned Lawrence to paint all the great European heads of state involved in that victory, who had gathered together at the Congress of Vienna. Lawrence painted Pope Pius VII (above) in 1819. Pius VII received credit for fighting Napoleon in the end, although he attended Napoleon’s self-coronation and played ball with the emperor when it suited papal purposes. The real importance of Lawrence’s portrait of Pope Pius VII comes in the amazing fluidity of the drapery and textures. Lawrence recognized the great potential of popish pomp and squeezed every last ounce of juice out of it. Always aware of the history of art, Lawrence measured his achievement against that of Raphael’s Julius II, Titian’s Paul III, and Velázquez’ Innocent X. Lawrence owned one of the finest collections of Old Master drawings in the world, so the greats of the past were always near at hand. A classicist at heart, Lawrence even helped acquire (for good or ill) the Elgin Marbles for England. Lawrence produced many non-portrait works of great beauty and power, but it was with his portraits that he made his fame and fortune, thus overshadowing the depth of this great, forgotten master.

I like to compare Lawrence with John Singer Sargent. Both owned immense, precocious talent that made their art seem lightweight and all surface with no depth. Both, however, were more than just portraitists of the rich and famous, as scholars now struggle to establish. Lawrence’s portrait of Margaret, Countess of Blessington (above, from 1822) certainly captures the surface flash of her good looks and beautiful finery, but it also reproduces the vivacity of her personally. Host of one of the foremost literary salons of her day, Lady Blessington was much more than a pretty face. The first time I saw a portrait by Lawrence it was this sense of life in the eyes that intrigued me to learn more about him and his art. Sadly, I’ve also seen some lesser Lawrence, including the portrait at that wedding, which seemed a later work, when Lawrence’s light was beginning to dim. It’s amazing to tally up just how much a simple innkeeper son achieved through artistic talent and personal charisma (he almost became an actor!), but even that seems a paltry sum considering just how far he could have gone.
Posted by Bob at 12:01 AM