Sisters Are Doing It for Themselves 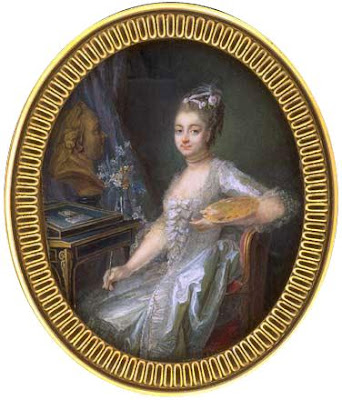 Sisters are doin’ it for themselves.
Standin’ on their own two feet.
And ringin’ on their own bells.
Sisters are doin’ it for themselves.
Now this is a song to celebrate
The conscious liberation of the female state!
Mothers, daughters, and their daughters too.
Woman to woman
We’re singin’ with you.
The inferior sex got a new exterior
We got doctors, lawyers, politicians, too.
Everybody, take a look around.
Can you see, can you see, can you see,
There’s a woman right next to you.

Women artists have always struggled to find a place in the male-dominated world of art, just a tiny slice of the larger patriarchy of history. One of the first places and eras in which women artists could assert themselves was late eighteenth-century France. Adelaide Labille-Guiard was one of the first great women artists of that time. Born April 11, 1749, Labille-Guiard began as most women artists did—as a miniaturist and pastel artist, the two genres deemed “acceptable” for their gender. Labille-Guiard’s Self-Portrait of a Miniaturist (above, from 1775) shows her as she saw herself at the point in her career—as a miniaturist who thinks bigger. Studying pastels with Maurice Quentin de la Tour, Labille-Guiard soon excelled at reproducing textures and faces, the two skills that would lead to a profitable career in portraiture later on. She studied oil painting under François-Elie Vincent and eventually opened up her own school after leaving her husband in 1777, just two years after painting her self-portrait as a miniaturist. Labille-Guiard’s world was about to get a whole lot bigger. 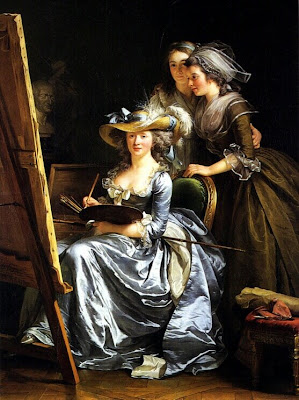 In 1783, the Académie Royale de Peinture et de Sculpture of France admitted Labille-Guiard, Marie Louise Élisabeth Vigée-Le Brun, and two other women artists. Strictures were placed upon the number of women who could be admitted and their work was never compared with that of the male members, but it was still a big step toward acceptance for these women. Labille-Guiard and Vigee-Le Brun thus began an artistic “rivalry” that continues even today. As much as people love the idea of artists locked in some kind of combat, commercial or ideological, I’d like to think that there was at least some sense of sisterhood between these two great women artists as they simultaneously broke barriers. Vigee-Le Brun, however, does seem more of a loner than Labille-Guiard. While Vigee-Le Brun courted Marie Antoinette and other prominent members of society, Labille-Guiard fostered relationships with the next generation of women artists. Self-Portrait With Two Pupils (above, from 1785) shows Labille-Guiard with Marie-Gabrielle Capet and Carreaux de Rosemond, two of her star students. No longer the meek miniaturist, Labille-Guiard paints herself in grand style surrounded by her favorite students, the legacy she hoped to leave behind. 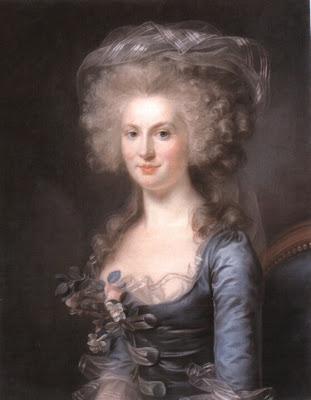 Ironically, the success of Self-Portrait With Two Pupils gained Labille-Guiard access to the court of Louis XVI via his aunt, the princess Marie Adélaïde. Labille-Guiard soon won a government pension, and commissions to paint the princess, her sister Victoire-Louise, and Élisabeth, Louis XIV's sister. Although she frequented this royal company, Labille-Guiard remained a revolutionary at heart, which helped her survive the violence of the French Revolution. She even found lasting love and married her old teacher Vincent. Labille-Guiard’s focus, however, always remained on the cause of women in the arts. The portrait of Marie-Gabrielle Capet (above), one of the two pupils in Labille-Guiard’s Self-Portrait With Two Pupils, shows the student dressed as a successful artist in her own right. It’s truly a shame that art history has treated Labille-Guiard as a lesser version of Vigee-Le Brun, as if only one great woman artist could be accepted at a time. Today, Labille-Guiard’s reputation has been resurrected by women artists looking for the ancestors who took those first difficult steps on the road to equality.
Posted by Bob at 12:01 AM

I recently came accross your blog and have been reading along. I thought I would leave my first comment. I dont know what to say except that I have enjoyed reading. Nice blog. I will keep visiting this blog very often.

Great post. While Marie-Rosalie (Rosa)Bonheur was in the next generation of female painters, she takes a prize for getting the last laugh -- she had to disguise herself as a man to paint at the horse markets, the inspiration for her masterpiece "The Horse Fair", and it was just recently discovered that she painted a self-portrait into this colossal painting. Amusing!

I was thinking Vigee-LeBrun right before you mentioned their rivalry--it's always nice to be introduced to a new name. Thanks for sharing!