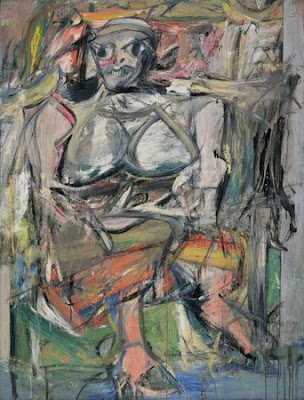 Of all the Abstract Expressionists, Willem de Kooning was always considered the most handsome, the most stylish, and the most debonair. (Val Kilmer played him in the movie Pollock.) Born April 24, 1904, came to America from his native Netherlands as a stowaway. Using his personal charm and growing artistic talent, he developed contacts throughout the New York City art world, the most important of which, at least early on, was Arshile Gorky. de Kooning painted in a very Gorky-esque style, full of the biomorphic figures Gorky is now famous for, into the early 1940s. By the 1950s, however, de Kooning had developed his own gesture-heavy style—a wild calligraphy of color. Some of the greatest examples of this style belong to the Woman series de Kooning painted in the early 1950s, beginning with Woman I (above, from 1950). de Kooning clearly has no desire to depict a woman realistically. In fact, he does everything possible to paint the figure unrealistically. Many people read misogyny into these paintings, extrapolating from de Kooning’s difficult relationship with his wife, Elaine de Kooning, and that’s certainly a possibility. But de Kooning also may be challenging the idea of portraiture and the figure itself, saying that we cannot get at the essence of humanity by painting the surface alone. Woman I, and her sisters, get at the heart of darkness within all men and women beating beneath our civilized exteriors. 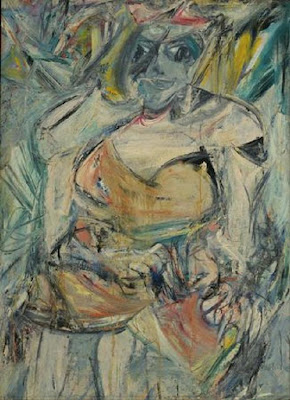 In Woman II (above, from 1951), de Kooning almost seems to take a step back from the edge he approaches in Woman I. Although the heavy gestural style remains in effect, there’s a greater softness in Woman II in comparison to Woman I. Woman I’s big eyes and bared teeth seem almost animalistic. In contrast, Woman II almost seems to be smiling. It’s as if there’s a copy of the Mona Lisa buried beneath the broad brushwork. Dating the individual paintings in the Woman series is difficult because de Kooning moved back and forth from one to another over the course of several years. It’s possible that each of these versions represents a different mood (violent, tender, etc.) and that de Kooning would work on whichever version suited his present mood. Looking at them together, you get a sense of an almost fugue state in how de Kooning saw women, or perhaps just the specific women in his life. 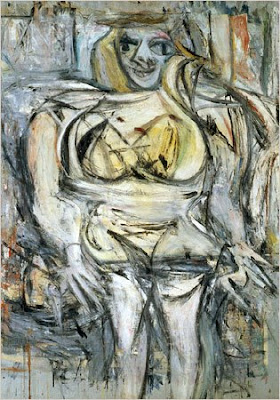 Of the first three in the series, Woman III (above, from 1953) appears to be the most ready for action. She stands, whereas the first two in the series appear to be sitting. A smile seems to play upon her face. The big eyes of the first painting return, but with a less accusing look in them. de Kooning accentuates the breasts of this version even more, perhaps suggesting a sexual availability or aggressiveness not found in the first two. By a strange twist of fate, this version was belonged to the Tehran Museum of Contemporary Art for many years. After the Iranian Revolution in 1979, however, the new regime refused to allow such a sexually charged painting to be displayed. Fortunately, it was sold out of Iran in 1994 and eventually resold in 2006 for $137.5 million USD, making it at the time the second most expensive painting ever sold. Despite the abstract expressionist style, it was clear to any observer that Woman III is all about sex, something even more permissive societies, let alone a fundamentalist religious state such as that in Iran, would want to keep under wraps. de Kooning’s women continue to amuse, frighten, entice, and offend to varying degrees, displaying the same versatility that their creator demonstrated throughout his long, distinguished career.
Posted by Bob at 12:01 AM

longtime follower, first time commenter...wanting to be a regular thought-sharer. just fantastic, this and all entries. so life-affirming. thank you for sharing your passions.