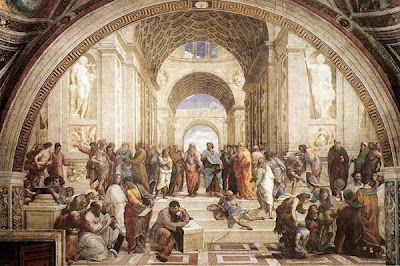 One of the highlights of my tour of the Vatican years ago was the opportunity to see in person Raphael’s The School of Athens (above, from 1511) in the Stanza della Segnatura. Born April 6, 1483, Raphael snuck portraits of himself and many of his fellow artists into his group snapshot of the glory days of Greek philosophy. I especially sought out Raphael’s portrait of Heraclitus, a portrait of Michelangelo inspired by Raphael’s sneak peak at the almost completed Sistine Chapel Ceiling. Raphael even painted Michelangelo in a Michelangelo-esque style, which makes Heraclitus stand out even more from the crowd. With Michelangelo and Leonardo da Vinci, Raphael comprises the grand triumvirate of the High Renaissance. Even into the early twentieth century critics as renowned as Bernard Berenson ranked Raphael above his two esteemed contemporaries. Thanks to the papal desire for high-quality decoration, Raphael and Michelangelo rubbed shoulders quite frequently in a school of shared respect and healthy competition. The spirited arguments recounted in The School of Athens could easily stand in for the aesthetic battles waged between these geniuses. 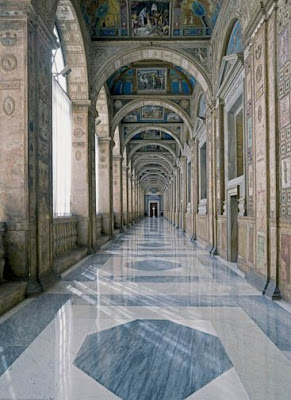 Just a few years after The School of Athens, Raphael opened up his own school of sorts, with the Loggia (above) of the triple portico of the Vatican Palace as his schoolroom. As related in Nicole Dacos’ The Loggia of Raphael: A Vatican Art Treasure (my review here), just before Donato Bramante, designer of the triple portico of the Vatican Palace, died in 1514, he suggested to Pope Leo X that Raphael could best finish the job. Raphael assembled his team of assistants and added artists from other countries over time to complete the multimedia work of creating sculptures and paintings to fill the Loggia. Nothing in the Loggia is actually by Raphael, but everything found there comes from his vision of a kindler, gentler idea of the Bible. Raphael wanted to create the perfect atmosphere of tolerance and peace for the pope to show to visitors while discussing diplomatic matters. Raphael’s Loggia essentially became a laboratory in which young artists were steeped in a new way of looking at the role of Christianity in the world. 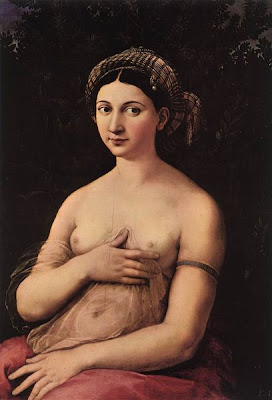 According to Giorgio Vasari’s Lives of the Most Excellent Painters, Sculptors, and Architects, Raphael died at the age of 37 after a night of wild sexual passion in the arms of his mistress Margherita Luti, the subject of Raphael’s portrait La Fornarina (aka, The Bakeress; above, from 1519-1520). Vasari’s Lives focuses throughout on the elevation of Michelangelo as the greatest of all artists as well as a paragon of virtue, so scripting a licentious end for Raphael, one of his chief rivals, made Michelangelo look all the better. Raphael’s reputation suffered another blow in the late nineteenth century thanks to John Ruskin and the artists known as the Pre-Raphaelite Brotherhood. Raphael may be the only artist to have a school explicitly NOT named after him, by name. Providing the theory for the Pre-Raphaelites' artwork, Ruskin condemned Raphael’s art, claiming that “execution was looked for rather than thought, and beauty rather than veracity.” Ruskin made Raphael the turning point in art history where everything went wrong. “in medieval art, truth is first, beauty second; in modern art, beauty is first, truth second,” Ruskin wrote. “The medieval principles led up to Raphael, and the modern principles lead down from him.” The Pre-Raphaelites wanted to turn back the clock and erase Raphael’s bad influence. Fortunately, their success in art didn’t translate into a success in art history. Raphael remains a powerful presence in the history of the Renaissance—another great teacher in that grandest of schools.