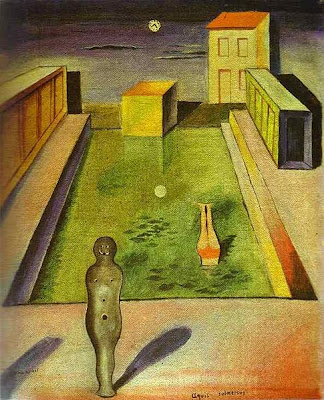 If Salvador Dali is the king of Surrealism, Max Ernst is the court jester. Born April 2, 1891, Ernst took the absurdity of Surrealism and Dada and emphasized the humor of the joke of reality over the existential angst accompanying the loss of rationality. In Aquis Submersus (above, from 1919), a doll-like figure with a handlebar mustache stands at the edge of a swimming pool surrounded by buildings. The buildings, however, seem more like two-dimensional stage backdrops. Their shadows appear behind as if projected onto a wall. The moon reflected in the water turns out to be a clock hung high above the scene. It is as if one of Giorgio de Chirico’s ominously unpopulated towns had been recreated by a grade school class for the school play. Ernst certainly knew of de Chirico’s art and is playing off of him here. de Chirico actually resisted the label of Surrealist, so Ernst may be trying to help him out here by showing how a little absurdity could be injected into de Chirico’s surreal seriousness. 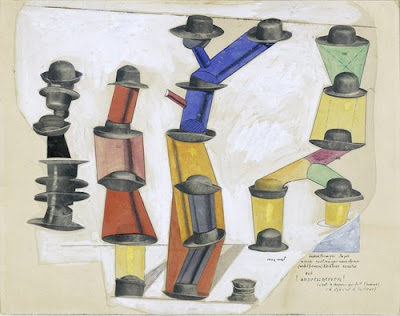 For Ernst and other Surrealists and Dadaists, every scrap of the world around them was fodder for foolishness. In The Hat Makes the Man (above, from 1920), Ernst cut out pictures of hats from catalogues, pasted them to a page, and linked them with lines of color to “make” living creatures roaming across the page. Always the clown, Ernst puns visually on the idea of “the hat makes the man” and literally constructs a “man” out of hats. Ernst claimed that the pictures of the hats and other bourgeois items for sale “provoked” him to action. Freud, in many ways the Surrealist’s best friend, saw hats as symbolizing repressed desire, literally keeping a lid on the id. Ernst runs with that idea and creates phallic columns of writhing hats struggling to keep things tidy. Just as Rene Magritte would later use bowler hats to stand in for the erasure of the modern man’s sense of self, Ernst uses hats to signify the fruitless struggle to cover up human urges. 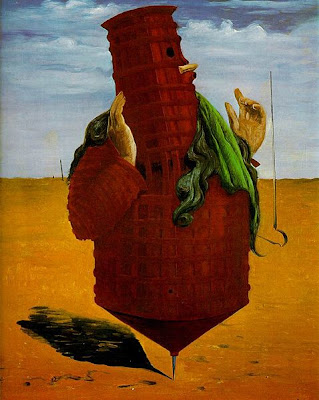 Ernst’s Ubu Imperator (above, from 1923) pays homage to the father of Dadaism, Alfred Jarry. Jarry’s 1896 play Ubu Roi inspired generations of European artists to “stop making sense” and thus deny the conditions of society presented by authority. Jarry founded the fake science of 'Pataphysics, or "the science of imaginary solutions, which symbolically attributes the properties of objects, described by their virtuality, to their lineaments," as Jarry unhelpfully described it. Like The Hat Makes the Man, Ubu Imperator is an individual made up entirely of accoutrements. Whatever animates the clothing might be human, but we’re not sure. All we know is that the clothing, which represents the commercialism and standards of a society, however vain and cruel, is coming our way. The great paradox of Ernst’s work is that while it almost never depicts a recognizable human, it contains a great deal of humanism. I look at some of Dali’s paintings and feel only sadness and horror at how they tear open the inhumanity of the world. When I look at Ernst and his covered-up characters, I laugh and feel hopeful that there’s something still worthwhile deep inside.
Posted by Bob at 12:01 AM

Link to this one.