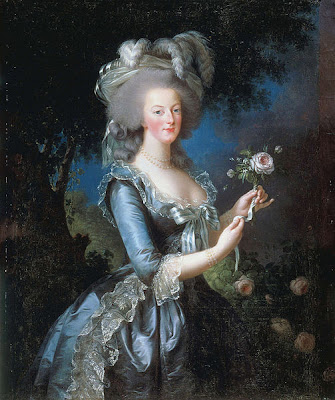 Because of her thirty portraits of Marie Antoinette and her family painted over a span of just six years (including the 1783 portrait above), Elizabeth-Louise Vigee-Lebrun’s legacy is heavily linked to the fortunes of that doomed queen. Born April 16, 1755, Vigee-Lebrun ranks among the greatest women artists of the nineteenth century, and is undoubtedly the queen of the Rococo style, with Jean-Honore Fragonard as its king. She first learned painting from her father, who was a fan painter, and later met Gabriel François Doyen, Jean-Baptiste Greuze, Joseph Vernet, and other prominent male French artists. However, Vigee-Lebrun made her name by painting the most fascinating women of her time, including Marie Antoinette. Even in pre-Revolutionary France, women artists enjoyed an increased degree of freedom and opportunity, yet still not equal to that offered to men. Recognizing a shift in the sexual balance, Vigee-Lebrun hitched her wagon to some of the greatest female stars of her time. She paired her soft yet abundant style to the effusive personalities of these other great women to create portraits that fully capture their personalities and place in the period. 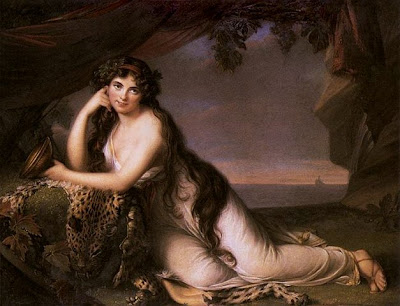 Emma, Lady Hamilton was the “It girl” of the Neoclassical strain of Romanticism. Born Emy Lyon, “Emma” used her beauty and charm to rise through the ranks of British society. Her marriage to the elderly William, Lord Hamilton was made to save the reputation of a younger relation. Lord Hamilton looked the other way as Emma conducted a lengthy affair with Lord Nelson that led to the birth of two illegitimate children. Emma Hamilton also served as a model for artists such as George Romney, Sir Joshua Reynolds, and Vigee-Lebrun. Vigée-Lebrun’s portrait of Lady Hamilton as Ariadne (above, from 1790) shows Emma caught in one of her “Attitudes,” in which she donned classical-looking dress and struck a pose. These “Attitudes” helped stoke the flames of Neoclassicism in Europe, turning even the head of Goethe and even leading to a kind of fashion craze. Even in heavy drapery, Emma Hamilton exuded sex. There’s always a hint of the erotic beneath all the finery in Rococo art, but Vigee-Lebrun’s portrait of Lady Hamilton as Ariadne gets straight to the point. 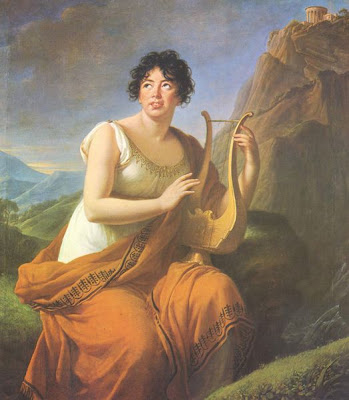 While Emma Hamilton stimulated the libido of the times, Madame de Staël stimulated the imagination. Vigee-Lebrun painted Madame de Staël as Corinne (above, from 1808) to allude to de Staël’s 1807 novel of the same name starring a young woman named Corinne. Named after the ancient Greek poet Corina, Corrine takes the Grand Tour with gusto, leaving behind her a trail of lovers, none of whom admired her for her mind as much as her beauty. Napoleon objected to the feminist perspective of de Staël’s novel so strongly that he had the author exiled from France in 1810. Like Marie Antoinette and Emma Hamiton, de Staël represents the strong woman of the late eighteenth and early nineteenth centuries. If the term feminism had been coined, they would all have been considered feminists on one level or another. Marie Antoinette may seem a strange feminist figure, but her outsider status in the court of Louis XVI and her hands-on approach to the education of her children make her more nuanced and approachable than the “Let them eat cake!” cartoon figure of legend. Vigee-Lebrun not only furthered the possibilities for herself and other women artists, but also provided examples of women persuading the world to follow a new course of gender equity.

i love coming here. I learn so much from you and it's fascinating stuff to me.

I was wondering If i could have permission to use this picture for my online class. :)