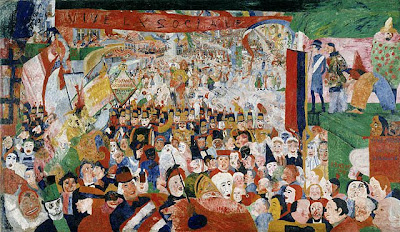 Introducing a trend towards unconventional depictions of Jesus Christ in late nineteenth century European art, James Ensor’s Christ's Entry into Brussels (above, from 1888) might be the strangest of all. Born April 13, 1860, Ensor struggled with his religious faith for much of his life. Resolving the message of Christ with the modern way of life seemed impossible to him. In Christ’s Entry into Brussels, Ensor depicts just how incongruous Christ would be walking the streets of Brussels, circa 1888. Most of the people flooding the street wear masks, an obsession of Ensor’s and his shorthand way of painting the issues of identity he saw as at the heart of modern alienation. You have to search long and hard to find Christ in the picture. Look for the disc of Christ’s nimbus about his head at the center of the painting, just below the banner stretched across the top. That banner reads “Vive la Sociale” or “Long Live Welfare,” just one of the many texts appearing in the painting, including an advertisement for “Colman's Mustard,” that add a subtext of the political manipulations and commercialism plaguing society. The mayor of the town presides over the parade from a reviewing stand like a modern Pharisee. Such a bizarre image of Christianity hit home later with the German Expressionists and Surrealists who would consider Ensor a father figure. 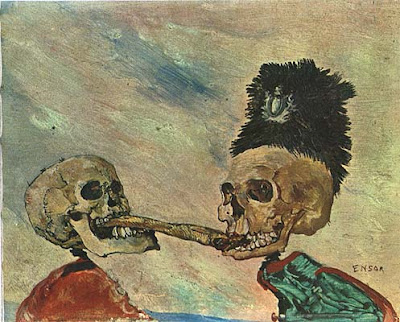 Ensor suffered from horrible ulcers. Life certainly seemed bleak to him, but he managed to keep a sense of humor about things. Christ’s Entry into Brussels is a bizarre and bleak view of society, but it’s also hysterically funny when seen from a certain perspective. The same perspective allows us to see Ensor’s Skeletons Fighting Over a Smoked Herring (above, from 1891) as a macabre joke. If Christ’s Entry into Brussels serves as a prototype for the Christ-haunted works of German Expressionists such as Emil Nolde (who visited Ensor in 1911), then Skeletons Fighting Over a Smoked Herring looks forward to the skewed humor of Surrealists such as Salvador Dali. The title alone seems like something thought up by the Monty Python troupe. Ensor whistles through the graveyard and plays with the bones with little concern for conventional propriety. That disregard for mainstream mores more than anything else set up Ensor as a hero for later artists of different nations looking for an example to follow. 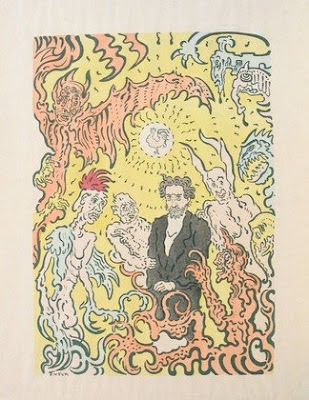 Ensor had his share of demons. Just look at his Self-Portrait With Demons (above, from 1898). That colored lithograph, almost cartoonish in style, helped open the eyes of other artists to the possibilities of printmaking to capture the devilish pictures dancing in their heads. Alfred Kubin owned several prints by Ensor. Leon Spilliaert, a fellow Belgian, felt the lasting influence of Ensor. Along with Odilon Redon, Ensor set the stage for imaginative art that took advantage of the new field of psychology. Demons no longer were seen as the products of a diseased mind but rather as the consequences of natural psychological reactions to the world. Ensor lived on to a ripe, old age, but he never recaptured the strange elegance of his most fruitful period between 1880 and 1900. I’m not sure it’s possible to sustain such close contact with the darkest corners of one’s mind without losing contact with reality entirely. Ensor stayed tethered to reality and the art world through his admirers, who watched his grand entrance and followed in his footsteps.
Posted by Bob at 12:01 AM