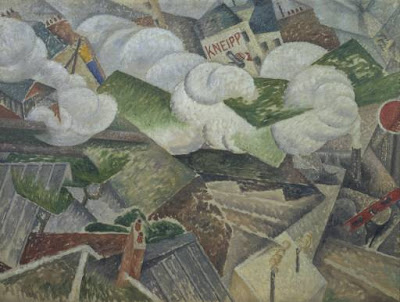 Unlike the rest of his fellow Italian Futurists, Gino Severini spent the First World War living just outside Paris rather than in Italy itself. Born April 7, 1883, Severini would watch the trains pass by carrying people, including soldiers, and supplies, including munitions. The increases speed of train travel epitomized the power of technology for Severini and the Futurists—a power on full, disastrous display in the war itself. J. M. W. Turner’s 1844 painting Rain, Steam and Speed - The Great Western Railway, one of the first examinations of rail power’s thrilling and chilling implications, seems almost quaint beside Severini’s disjointed, Cubist-influenced scene, Suburban Train Arriving in Paris (above, from 1915). We have no idea from the painting or the title what the train holds, but the year itself makes it likely that soldiers, perhaps wounded or dying, were aboard, returning from the front in search of medical care. In the background, the word “Kneipp” rises recognizably. “Kneipp” was a popular malted beverage of the time. It’s advertising lends an ironic note of normalcy to the abnormality of the times, as if a Coca Cola sign hung on a graveyard’s entrance. 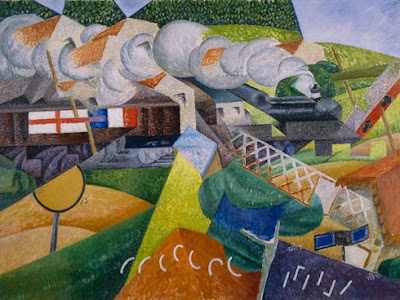 Later that same year of 1915, Severini painted another train scene, titled Red Cross Train Passing a Village (above). Severini makes the context clearer by including the Red Cross in the title and adding the recognizable Red Cross symbol to the side of the train. We now know exactly who is riding through the countryside and the urgency behind the train’s speed. Whereas the train in Suburban Train Arriving in Paris is almost inconspicuous thanks to the Cubist styling integrating it with the background, the train in Red Cross Train Passing a Village appears clearly against a jumbled landscape. The Red Cross train actually seems to slice through the Futurist style of the rest of the picture, as if Severini were trying to hint that the reality aboard the train trumped any visual games Futurism and its credo could produce. Guillaume Apollinaire mocked the Futurists for their disconnect with the main currents of art and society. Severini eventually agreed with Apollinaire, but only after the war. Red Cross Train Passing a Village may enact in paint the conflict in Severini’s mind as he struggled to hold onto his Futurist faith despite the evidence mounting against it. 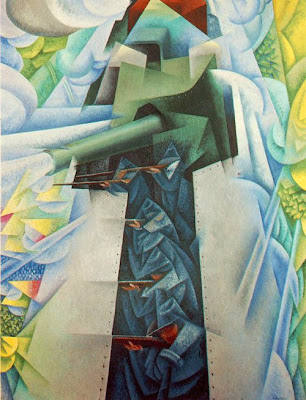 Severini’s greatest train painting of this year 1915 remains Armored Train (above). He based it on a photo showing French soldiers firing back at German soldiers in trenches from the safety of an armored train. In 1915, such attacks against trenches remained possible, but eventually the war turned into a slow grind of attrition with entrenched armies locked in a seemingly endless stalemate. Severini makes the most of the lines of the rifles and cannon pointing outward. Lines of energy mark the bullets and bombs sped perpendicularly to the movement of the train itself. The soldiers enjoy the false sense of security of the armored car, much as Severini enjoyed the false sense of satisfaction in technological triumphs throughout the early war years. At this point, Severini might have identified with the isolation of the soldiers on the armored car as they are entrapped by the womb of steel plating against certain death outside. Severini didn’t face death himself in France, but he was surrounded by it, with new doses of reality arriving daily on the trains that passed him by.

Very interesting. Thank you! Do you suggest any sources with more information about Severini's depictions of trains?

The painting is titled "Suburban train arriving in Paris", or "Train de banlieue", so it must simply be a train for regular commute like there are so many today (under the name of RER or Transilien).