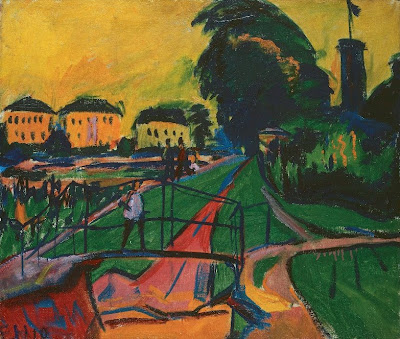 “What is great in man is this: that he is a bridge and not an end,” wrote Friedrich Nietzsche in Thus Spoke Zarathustra in 1885. Two decades later, on June 7th, 1905, four young architecture students in Dresden, Germany, may have had those words in mind when they founded the artists group known as Die Brucke, or “The Bridge.” Ernst Ludwig Kirchner, Karl Schmidt-Rottluff, Erich Heckel, and Fritz Bleyl thus began an artistic movement that would stage more than seventy exhibitions before their disbanding in 1913, with twenty-seven happening in 1907 alone. “By joining together into a small, cohesive community with common goals, the Brucke artists hoped to stand up to [the] putatively fragmenting, debilitating effects of modern urban life,” writes Reinhold Heller in his essay “Brucke in Dresden and Berlin, 1905-1913” in Brucke: The Birth of Expressionism in Dresden and Berlin, 1905-1913, the catalogue to the current exhibition at the Neue Galerie in New York City. This exhibition, the first major exhibition of the Brucke in the United States, resituates these artists at the very beginning of the modern, international art world as they reached beyond Germany’s borders and invited the likes of Norwegian Edvard Munch (unsuccessfully) to join their band. “By reaching out, whether successfully or not, to such revolutionary painters,” Heller continues, “the Brucke established a network of communication with Europe’s most progressive artists and art institutions.” Dresden, known as “Florence on the Elbe” and famous for its many bridges (one of which is captured in Erich Heckel’s Landscape in Dresden, above, from 1910), thus became the starting point for the bridge-building across borders and between individual artists that the modern art world has become today. 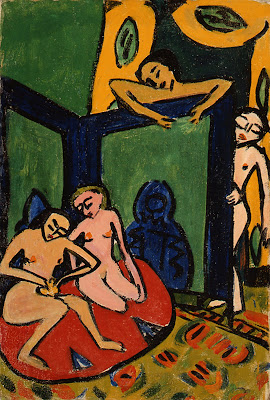 In addition to their unsuccessful wooing of Munch, the Brucke successfully brought other artists, such as Emil Nolde and Max Pechstein into their fold. Staging group exhibitions and developing a signature style for their promotional material, the Brucke artists created a template for later artistic groups to follow. In all things, however, the Brucke set out to stand apart from the flow of contemporary, mainstream German life. They embraced “primitive” Indian, Oceanic, and African art, following in the footsteps of heroes such as Van Gogh and Gauguin and their search for primal forces untainted by modernity’s touch. This primitive approach, especially to the human figure, appears throughout their work, including Heckel’s Studio Scene (above), which also accurately depicts the everyday existence of the Brucke. For the Brucke artists, work and life were inseparable and models became friends and, sometimes, lovers. The artists even provided a “ruheraum” or “room of rest” for the models away from the labor of modeling. The German government’s crackdown on erotic images made the nude images of the Brucke artists all the more daring and avant-garde. In a musty old world suddenly thrown into an industrial age, the Brucke artists painted themselves as outlaws belonging to neither, but rather inhabitants of their own bohemian sphere of equality, fraternity, and, above all, beauty. 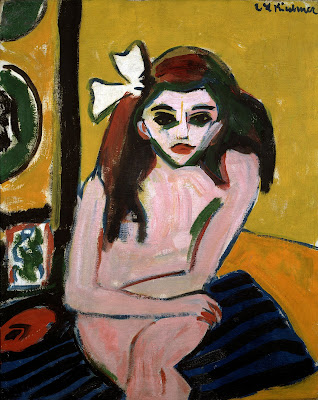 Ernst Ludwig Kirchner (1880-1938). Marzella (Fränzi), 1909-10. Oil on canvas, 76 x 60 cm (29 7/8 x 23 5/8 in.). Moderna Museet, Stockholm.
In the midst of this cultural separation, however, the Brucke longed to reconnect with what they saw as the essence of German art. Surrounded by the medieval art treasures of Dresden, the Brucke artists embraced forefathers such as Albrecht Dürer, Matthias Grünewald, and Lucas Cranach the Elder. Kirchner fashions himself as a modern Durer, who becomes “ German cultural hero” for the entire group, according to Christian Weikop in his essay, “Brucke and Canonical Association.” Nolde champions Grunewald as embodying “Nolde’s anti-academic, anti-Renaissance position,” Weikop writes. When Kirchner paints nude figures such as his Marzella (above, from 1909-1910), he channels Cranach’s approach to the nude. Kirchner elsewhere goes so far as to quote directly some of Cranach’s nudes, building a bridge across the centuries using the female form as building material. “Dresden offered much inspiration,” Weikop writes. “Here… Brucke found its first art historical corroboration in Cranach, [Sebald] Beham, and other German masters of the Middle Ages.” The Brucke even resurrected the quintessentially German medium of the woodcut as a way of recalling the past to get back to the future of art. When the Nazis debated on how to judge the Brucke in the days of the “Degenerate Art” exhibition, Joseph Goebbels and others argued for the Germanness of the Brucke, but Hitler ultimately overruled them. 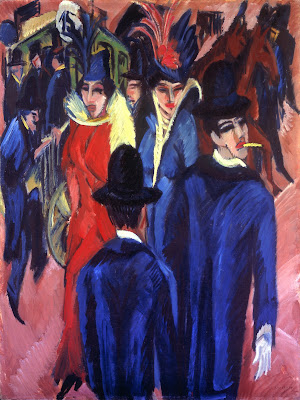 Despite this German self-identification, the Brucke continually looked beyond national borders. Jill Lloyd’s “Brucke: National Identity and International Style” examines the tension between these nationalist and internationalist impulses. Dresden exhibitions of Van Gogh’s work in 1905 and Munch’s work in 1906 bring the cutting edge of art right to the Brucke’s doorstep. (The Neue Galerie’s Van Gogh and Expressionism exhibition in 2007 [my review here] covered that link extensively.) Lloyd sees the Brucke’s taking in of these influences not as “slavish dependence” but rather as “transformation[s].” Comparing the Brucke with their contemporaries, the Fauves, Lloyd writes, “Whereas the French artists worked within an established national tradition, the Germans pursued a self-conscious internationalism that went beyond the formulation of a new expressive style.” Criticism of the Brucke for not being “German” enough drove them in 1911 from Dresden to the more international city of Berlin. Berlin was the hub of the international art market at the time and provided easier access to the rest of the art world. In Berlin, Lloyd writes, the Brucke could “build more consciously on the elements of ‘Germanic’ or ‘Gothic’ style that had always co-existed with their modernism.” Kirchner’s Berlin Street Scene (above, from 1913-1914) shows how he adapted to his new, more cosmopolitan surroundings. 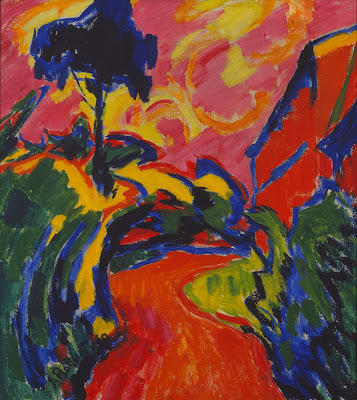 By 1911, however, the Brucke artists were beginning to grow apart. When Kirchner writes his chronicle of the movement and casts himself as the leader, Schmidt-Rottluff (whose Corner of a Park appears above, from 1910) and others take offense and finally disband in 1913. As Rose-Carol Washton Long explains in her essay, “Brucke and German Expressionism: Reception Reconsidered,” the Brucke soon drifted to the margins of art history for being not “modern” enough or not “political” enough. Only in the last twenty years, when “modernism” has been redefined as “one of the conflicting products of change in an industrial society,” Long writes, have the Brucke been rediscovered as an essential step in the progress of modern art. Brucke: The Birth of Expressionism in Dresden and Berlin, 1905-1913, the catalogue and exhibition, not only brings this neglected school to American shores for the first time, but also allows them to resurface from the depths of art history obscurity. Rather than being just a poor relation to Der Blaue Reiter, Die Brucke helped shape the international art world as we know it today in all its jet-setting internationalism. Able to embrace both their own national heritage and those of other civilizations, the Brucke artists set an example that artists continue to follow today, even if they don’t know where, how, or why it began. The Neue Galerie’s exhibition will answer all those questions, and more.

[Many thanks to the Neue Galerie for providing me with a review copy of Brucke: The Birth of Expressionism in Dresden and Berlin, 1905-1913 and for the images above from the exhibition.]
Posted by Bob at 12:01 AM