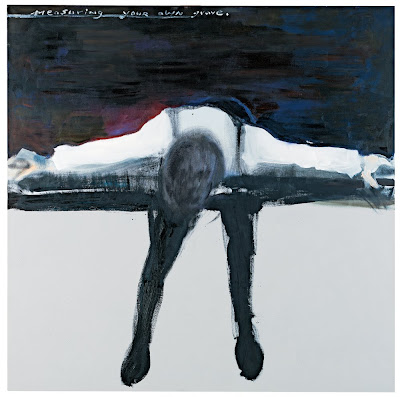 “It is the best definition I can find/ for what an artist does when making art/ and how a figure in a painting makes its mark,” writes Marlene Dumas in the poem that accompanies her painting Measuring Your Own Grave (above), which provides the title for the Menil Collection’s exhibition surveying Dumas’ unique figurative approach to art and the modern world of images. “An artist for more than thirty years, Dumas has only recently begun to articulate her practice as a visual accounting of our time through the representation of individuals or, rather, as bodies and souls as they move through the incidents of life, politics, and art,” writes Cornelia Butler, the organizer of the exhibition and the catalogue, in her essay “Painter as Witness.” Dumas bears witness to the modern world by taking photographs from the mainstream and creating a parallel flow of art that accentuates aspects of the images all around us that may be too subtle or too buried by familiarity for us to realize. “Dumas seeks to recuperate in her viewer, in the public,” Butler continues, “a sense of the raw violence and physicality of bodily existence, the nakedness of life, sex, birth, and death.” In a world that seems as emotionally flat and two-dimensional as a snapshot, Dumas introduces a third dimension of feeling and weight that reawakens us to reality. 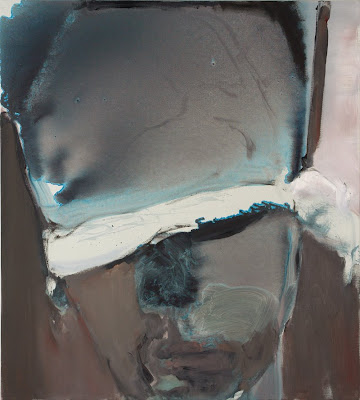 Like Fernando Botero and others, Dumas finds the visual imagery of the Iraq War and the Abu Ghraib torture controversy endlessly fascinating. Dumas series titled Man Kind running from approximately 2002 through 2006 explores the meaning of these photographs. “Since 9/11,” Butler writes, “very few aesthetic statements have gone so far in penetrating the scope and dramatic impact of monumental violence, loss, and fear.” Dumas’ The Blindfolded Man (above) forces us to look closely at the humanity of the prisoner and, thus, at our own humanity (or inhumanity). “The ‘other’ is also a mirror image of ourselves!” Dumas says. “Look in the mirror and talk to Al Qaeda.” Such games with knowledge and self-knowledge unsettle and unnerve unprepared viewers. In an essay titled “Less Dead,” Richard Shiff speaks of how Dumas “knows that the viewer of an image brings his or her cultural indoctrination and personal history to bear on the perception of meaning, that differing cultures and histories generate a conflict of interpretations, that competing ideological structures lead individuals deep into moral confusion.” Dumas’ focus on the human body, the one “given” across all cultures, strips away all the viewer’s personal baggage and tries to resolve the “moral confusion” of the war on terror and other conflicts. For Dumas, “A” is never A. “A” is always A with complications added. Dumas honestly admits her manipulation of source photographs while trying to make us see the manipulations behind the original image. 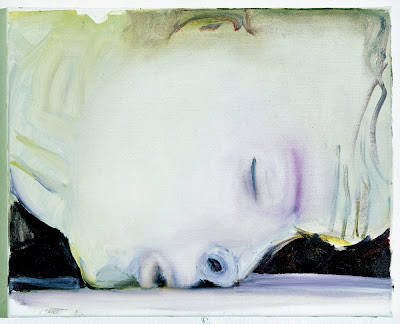 Dumas works exclusively from photographs and film stills. The catalogue includes many sources for her work, allowing us a glimpse at the creative process from origin to finished concept. Like Francis Bacon, Dumas enlivens photographic images of the dead and suffering and gives the subjects new life in art—a posthumous immortality. Also like Bacon, Dumas sees the erotic aspects of death and dying, but with the significant difference of a heterosexual woman’s viewpoint rather than that of a homosexual man. The Kiss (above) originated from a film still from Alfred Hitchcock’s Psycho in which the just-murdered Janet Leigh’s dead, yet open-eyed character “kisses” the bathroom tile. Closing the eyes and turning the head slightly, Dumas accentuates the “kiss” of death found in the original. Such manipulation reveals how Dumas imaginatively reaches into a source image and physically moves things around to suit her needs. “There is a crisis with regard to representation,” Dumas believes. “They are looking for meaning as if it was a thing. As if it was a girl, required to take her panty off.” Dumas paints whole series of near-pornographic images of women in highly revealing poses that play off of these concept of the striptease of meaning. Shiff emphasizes the power of empathy in Dumas’ work. When we look at these people, we feel for them as much as the artist did. “When we attend to a Dumas painting,” Shiff writes, “it is as if human will were acknowledging a certain necessity: it must yield to human sensation as well as to the sentience of other bodies, including other material things.” Dumas makes us engage with the other. If bodies in Bacon’s paintings are means towards the end of aesthetic and/or sexual pleasure, bodies in Dumas are never a means to anything but are instead the end itself.

In “The Binding Factor: The Maternal Gaze of Marlene Dumas,” Lisa Gabrielle Mark analyzes how Dumas takes this empathetic approach and applies it to the conflicted reality of motherhood. For Mark, Dumas dares “to evoke the erotic flush and existential terror of motherhood, a trajectory that begins with the warmth and intimacy of sexual desire and eventually meets the cold indifference of the outside world.” Dumas, a mother herself, knows “the profound ‘otherness’ that lies at the heart of maternity: for the mother, the child is of her but not her,” Mark continues. The Woman of Algiers (above) belongs to the images of torture and pain in Dumas’ oeuvre, but it also shows that world from the perspective of a woman who may know the pain of childbirth and the separation anxiety of sending that child into the world. Dumas’ portraits of her daughter Helena and other children reminded me in their alien-ness of the descriptions of the Creature in the novel Frankenstein, in which Mary Shelley worked out her own personal childbirth demons. Whether it is race, gender, violence, sexuality, or the nature of reality itself, Dumas paints how these forces embed themselves into the photographic world surrounding us and confronts us with the things that we neglect or, more likely, refuse to see. 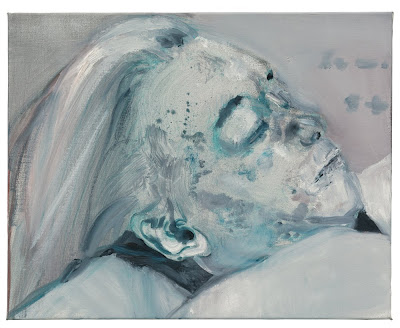 “Painting is more about one’s own death than about other people’s death,” Dumas once remarked. Dead Marilyn (above) shows Dumas’ take on the infamous autopsy photographs of film star Marilyn Monroe. Without make-up and marred by bruises, the sex goddess’ “true” face comments not only on the falseness of the Hollywood persona but also on the underlying vulnerability that is infinitely more interesting and attractive. Dumas truly, as Butler puts it, “mines the images that have informed a collective understanding of our era” with “a restless, generous, and heartily discursive spirit.” The graphic sexuality and violence of much of her work will likely turn away some viewers, but it is that honest appraisal of the images of modern life that make such “offensive” material vitally essential. Dumas refuses to sanitize or filter out any aspect of life. She sifts out the convenient explanations and denials that make modern imagery palatable and hands us nuggets of truth. Whether we can swallow those nuggets or continue to choke on them is up to us. Measuring Your Own Grave takes the measure of man and womankind and holds up a disconcerting, disturbing, yet always fascinating and ultimately empathetic mirror to our lives, asking us only to look and consider, perhaps for the first time, what we see.

[Many thanks to the Menil Collection for providing me with a review copy of Marlene Dumas: Measuring Your Own Grave and for the images above from the exhibition.]
Posted by Bob at 12:01 AM