A Man of His Time 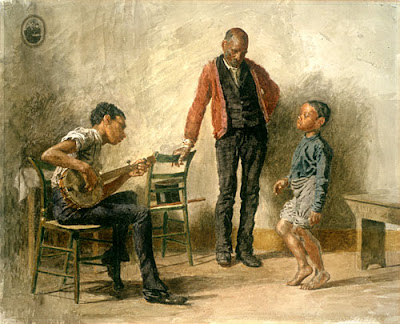 Any statement by any artist is always to some degree a document of that time and place. It’s an unavoidable truth. Either by consciously fighting against or unconsciously following along with the status quo, artists always act in response to the here and now. Many critics today look at Thomas Eakins’ The Dancing Lesson (above, from 1878) and see a sympathetic rendering of three generations of African-Americans sharing the music and dance of their culture. In Thomas Eakins and the Cultures of Modernity, however, Alan C. Braddock sees something different going on. He argues that the definition of “culture” that modern critics read into The Dancing Lesson, which was originally called simply The Negroes, is one Eakins would never have known. “The art of Eakins embodies a premodern understanding of cultural difference,” Braddock argues. Eakins and the late nineteenth century would have seen African-American culture as a “lesser” kind or a preliminary step in the evolutionary ladder leading up to Western European culture, the pinnacle of civilization, at least to Western Europeans and their descendents. Eakins places in the upper left corner of The Dancing Lesson a photo of Abraham Lincoln reading with his son Tad, thus illustrating the gap between African-American tradition and white Anglo-American tradition. Only in the 1920s and 1930s did anthropologists see culture as a social construct rather than a racial one. In Thomas Eakins and the Cultures of Modernity, Braddock steps back in time and puts himself in Eakins nineteenth century shoes to better understand the American mind on the cusp of a new concept of culture. 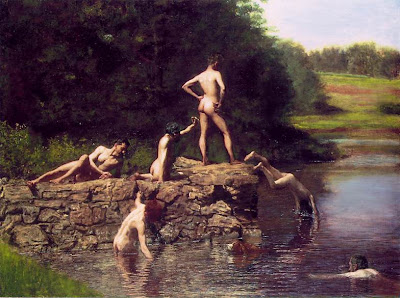 Braddock excels in making familiar images from Eakins’ oeuvre come to fresh life with new implications. He begins by tracing Eakins’ conflict with culture back to his time training in Paris with Jean-Leon Gerome from 1866 through 1870 and his time in Spain on the suggestion of his other teacher Leon Bonnat. Yet another teacher, Hippolyte Taine, put into words the cultural theories that Eakins worked under. Taine “asserted the importance of viewing works of human creativity as the natural, objective residue of national character,” Braddock writes. In Paris during the 1867 Exposition Universelle, Eakins experienced a world of difference as representatives (and misrepresentatives) of different nations and races gathered together in what Braddock calls “a monumental spectacle of nomadic strangeness.” That world fair placed people on display for the first time, providing “living evidence of evolutionary difference,” Braddock explains, for Eakins and his contemporaries. Gerome, Eakins’ primary teacher, excelled in exotic Orientalism that never progressed beyond picturesque slumming. Eakins echoes Gerome’s view of Western civilization’s primacy throughout his career, even as late as 1885 with Swimming (above). Setting Swimming in an idyllic, but still identifiable location outside Philadelphia, Eakins both evokes the ancient Greeks and escapes from the contemporary ethnic masses then filling the city. Braddock sees this “aesthetic vision of suburban retreat to a contemporary, local Arcadia” as a precursor to the modern phenomenon of “white flight” now decimating major American cities. 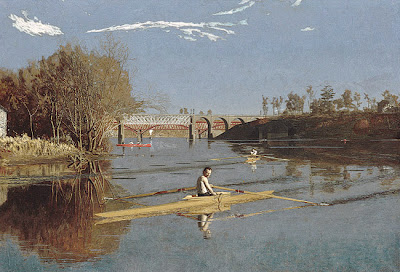 As a life-long Philadelphian, I find it hard to believe that the waters of the Schuylkill River once were even more polluted in the nineteenth century, leading to a public health hazard that claimed many lives, including that of Eakins’ own sister Margaret. Yet, when Eakins painted The Champion Single Sculls (Max Schmitt in a Single Scull) (above, from 1871), we see not the green ooze of contemporary descriptions Braddock provides but a blue oasis. Braddock bashes the familiar trope of Eakins as the ruthlessly exacting realist, showing how “none of the gritty frankness about modern environmental realities” enters the pictures. Eakins specifically plays with the facts to “sell” the “commodity” of “local color,” which for Philadelphia meant outdoor activities such as rowing. This local color makes up much of the culture of Eakins time and place, but that local color owes much to the internationalism of Eakins’ art education. “Viewing Eakins and his art simply in terms of Philadelphia ‘roots’ or American national character also misses the cosmopolitanism of ‘local color’ itself as a widely circulating commodity in which he and many contemporaries traded,” Braddock writes. Eakins painted a very ordered world in which heroic whites such as Max Schmitt rowed the “beautiful” waters of the Schuylkill while black guides led middle-class hunters through the marshes in paintings such as Pushing for Rail. “Eakins’s realism differentiated the various people and aquatic zones around Philadelphia according to a picturesque logic that embodied middle-class expectations and assumptions,” Braddock argues. Even when the harsh reality of life in Philadelphia claimed one of his family, Eakins refused to disrupt his view of the neatly ordered pyramid of cultural progression. 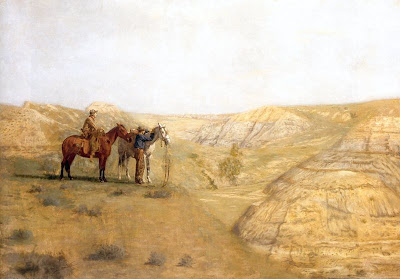 Eakins’ scandalous dismissal from teaching at the Pennsylvania Academy of the Fine Arts in 1886 put that ordered world into jeopardy. Following the popular trend begun by Theodore Roosevelt, Eakins looked west, and traveled to the Badlands. For Eakins and others, the American West becomes “a powerful metaphor of national renewal, progress, and civilization at a pivotal moment of modernization,” Braddock explains. Taking in the ideas behind TR’s glorification of the victory of white settlers over Native Americans as well as the racial subtext of Buffalo Bill’s Wild West show, Eakins idolized the American cowboy as the epitome of American cultural superiority overcoming their lesser, i.e., the Native Americans. As Braddock points out, Eakins’s Cowboys in the Badlands (above, from 1888) clearly echoes Gerome’s Bonaparte Before the Sphinx, which shows the conquering Napoleon looking down upon ancient Egyptian culture. The template of cultural evolution inherent in Gerome’s work finds its way again and again into that of his greatest student. 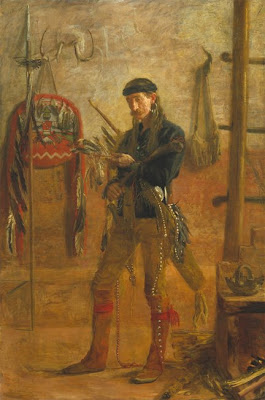 For all the study of Eakins’ relationship with physicians, most famously in his masterpiece The Gross Clinic, less attention has been paid to the artists’ relationship with several of the anthropologists that helped found The University of Pennsylvania Museum of Science and Art (now known as The University of Pennsylvania Museum of Archeology and Anthropology) in 1889. Eakins painted portraits of seven people heavily involved in the growing field of anthropology at the turn of the century. “Standing chronologically on the threshold of the modern culture concept but never really encountering or comprehending it,” Braddock writes, “Eakins and his art marked the twilight of nineteenth-century anthropological thought. The portraits [of these anthropologists] serve s the visual epitaphs to an obsolescent paradigm.” The most fitting painted epitaph of this paradigmatic twilight may be Eakins portrait of Frank Hamilton Cushing (above, from 1895). Cushing studied the culture of Zuni Native Americans in New Mexico, adopted their dress, and even learned some of their rituals. Eakins shows Cushing engaged in incantations in full ceremonial dress. Braddock recounts meetings with present-day Zuni Indians who recoil from the portrait and how it disrespects their sacred customs. That sense of of the portrait’s insensitivity serves as a handy barometer for just how different the concept of culture between Eakins’ time and ours.

Braddock provides excellent insights into Eakins’ place in nineteenth century art as the world began to grow smaller and cultural interactions became increasingly unavoidable. He shows the biases and, to modern audiences, racism of Eakins without demonizing him ala Henry Adams in Eakins Revealed. Most criticism of Eakins still lingers in the shadow of Lloyd Goodrich’s adoption of Eakins as the quintessential American artist in the 1920s, much as literary critics rediscovered Herman Melville as the quintessential American novelist in that period’s manic race to generate a legacy of American culture long after the fact. Thomas Eakins and the Cultures of Modernity strips away the easy generalities of Eakins the ruthless realist and Eakins the cultural outsider to recover the flesh and blood Eakins of his time and place, for good and ill, in all his wonderfully flawed humanity.

[Many thanks to the University of California Press for providing me with a review copy of Alan C. Braddock’s Thomas Eakins and the Cultures of Modernity.]