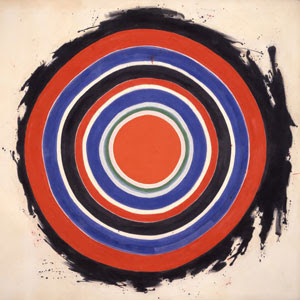 The greatest argument for going out and seeing paintings in person is the insufficiency of reproduction, especially when it comes to modern art. Barnett Newman’s Vir Heroicus Sublimis seems small and paltry in a book or on a computer screen, but when you stand before it you are overcome with a world of red-hued emotion. Likewise, the works of Kenneth Noland suffer in reproduction. Born April 10, 1924, Noland sometimes finds himself linked with Abstract expressionism, perhaps in his kinship with Newman, but is more often grouped with Color field painters such as Morris Louis and Helen Frankenthaler. Noland’s work can be broken down into fairly self-contained sections, beginning with the circle paintings he did from 1956 through 1963, such as Beginning (above, from 1958). Although they might remind one of Jasper Johns’ target series, Noland’s circles focus on the interplay of color rather than the repetition of familiar shapes. Many of Noland’s circles seem almost mechanical in reproduction, where the subtle touches of the human hand are lost, much like the feathery edges of Newman’s “zips.” Beginnings shows more clearly Noland’s gamesmanship with the boundaries of the circle. Noland uses circles and shapes to emphasize the way that shapes contain or set boundaries and then breaks out of that containment. The colors in Noland’s circles and other shapes interplay to create a mood while simultaneously push beyond the canvas into the viewer’s imagination. 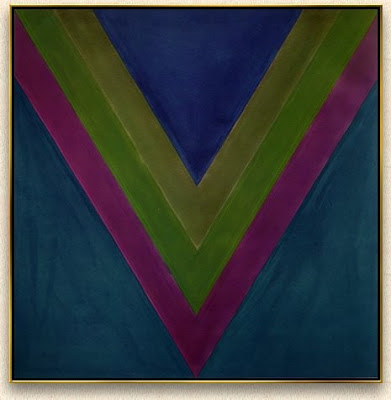 In the mid-1960s, Noland shifted from circles to chevrons, such as those found in Blue Veil (above, from 1963). Another common motif structure for Noland during this period was stripes, which essentially just unbent the chevrons. Both series again explore the way that colors can be arranged to create a mood. Blue Veil stands out from many other Noland paintings in that the dark background evokes feelings in strong contrast to the white backgrounds and brighter colors of other works. Noland cites Paul Klee as a great influence on his approach to color, but you could make a similar argument for the influence of Matisse. Noland could then be seen as a Fauve minus the beastliness but with the same aggressively innovative approach to experimenting with color’s capacity to bypass the mind and touch the heart. By eliminating the recognizable imagery of Matisse and others and going straight into abstract color, Noland defies rational explanation while inviting irrational responses. 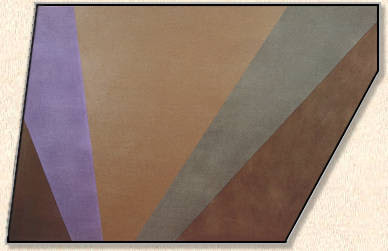 By the 1970s, Noland went beyond putting shapes on canvas and began to shape the canvas itself into irregular delivery systems for his ideas. In Moon Ray (above, from 1976), Noland paints a series of stripes radiating from a point and physically stretching the usually square or rectangular canvas into something unique to the composition. Again, form follows function for Noland. Where circles and chevrons once supplied containers for him to overfill with color, the dimensions of the canvas itself now bend to his will. Ellsworth Kelly, Noland’s almost exact contemporary, similarly uses irregularly shaped canvases to express an idea, but more often using a single color, such as his Lake II, which “steals” a lake right out of a Cezanne. Noland experimented with many other shapes, some of which resembled surfboards. Still active, Noland continues to work the edges and surf conceptually through the very idea of painting, testing the boundaries and yet, unfortunately, rarely recognized for how he helped shape modern art.
Posted by Bob at 12:01 AM