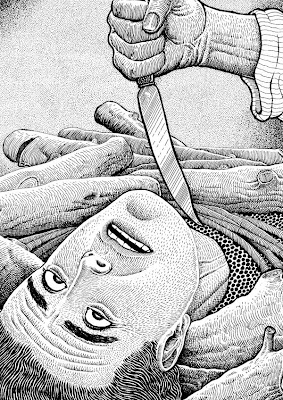 Any red-blooded American boy who ever picked up an issue of Mad Magazine might not know the name but certainly knows by sight the style of Basil Wolverton. Monte Wolverton, Basil’s son, continues to work in a similar style as his father, bringing the bizarre, grotesque Wolverton look to new generations. Although Basil is best known for his Mad work, he himself wanted to be remembered for his little-known work for Herbert W. Armstrong’s Worldwide Church of God that appeared in the magazine The Plain Truth. The Wolverton Bible: The Old Testament and Book of Revelation Through the Pen of Basil Wolverton, compiled by Monte Wolverton, brings together the religious work of his devoutly religious father and sheds new light on Basil as a serious illustrator. Basil worked on these 700 images illustrating the Bible from 1953 through 1974 while simultaneously working for Mad and other publications. “In all this, Wolverton saw no conflict,” Monte explains of his father. “One realm was religious and the other secular. He believed religious people need to lighten up and not take themselves seriously.” Part of that lightening up process involved Basil’s dramatic, almost cinematic approach, which could reinvigorate old tales such as Abraham’s sacrifice of Isaac (above) with a fresh, contemporary look. 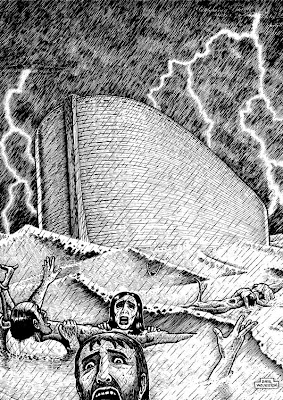 Wolverton began corresponding with Armstrong in the 1940s, after listening to Armstrong’s radio show The World Tomorrow. By 1943, Wolverton was an elder in the Worldwide Church of God and soon on the church’s board. Armstrong soon enlisted Wolverton to use his art to reach younger audiences. “From the beginning,” Monte writes, “both Wolverton and Armstrong sought to create a story that followed the Bible account more accurately than children’s Bible story books on the market in the 1950s” that “laundered” the story’s darker aspects. “Wolverton’s comic horror work and his grotesquely humorous drawings were consistent with his theological understanding of the human condition,” Monte continues, explaining how Wolverton’s artistic style and religious beliefs meshed in his Biblical illustrations. Whereas other depictions of Noah’s Ark emphasized cute animals, Wolverton emphasized the plight of those left behind (above) who faced God’s watery wrath. Unfortunately, Wolverton’s recovery of the violence of the original text challenged the sensibilities of the intended youthful audience as well as the patience of their parents. The Woverton Bible almost bursts open with pictures of masses of humanity facing one catastrophe after another—all drawn directly from the Bible itself, but still capable of traumatizing children unaccustomed to that side of the story. 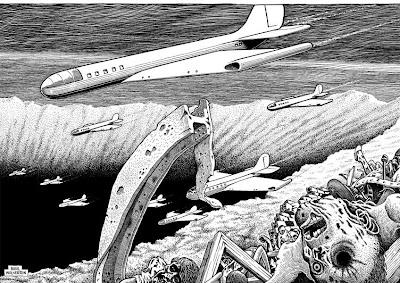 Wolverton’s illustrations of the Old Testament bring many of the stale tales to life in ways no other twentieth-century artist has. Yet, Wolverton didn’t see himself as a “fine artist.” “Unlike many comic-book artists,” Grant Giessman writes in his Foreword, “Wolverton considered himself to be primarily a comic artist, with no secret longing to break into the fine arts, do portrait painting, or escape the ‘comic-book ghetto’ by going into advertising work. He loved the genre, with all of its perceived limitations.” In Wolverton’s hands, the “limitations” of the comic genre become strengths, especially when tackling the visually challenging text of the Book of Revelations. Wolverton takes the passage discussing “Death on a Pale Horse” and converts the Four Horsemen of the Apocalypse into bombers raining death upon the landscape (above). Such images, which played into the already present 1950s fears of nuclear annihilation from above, drew the most complaints—a testament to the power these works had to take ancient words and make them feel immediately present. 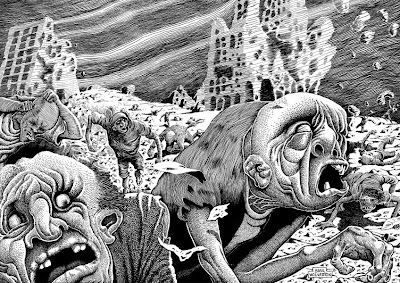 Wolverton reveled in unleashing the full extent of his macabre imagination on the material found in Revelations. He called Mutants (above), one of his favorite images, even though Armstrong blanched at using it in The Plain Truth out of fear of how it would affect young minds. Despite such concerns, Giessman writes, “Armstrong clearly had the right man for the job, because it’s difficult to gaze for very long upon Wolverton’s horrific end-of-the-world visions and not wonder if you really shouldn’t get right with Jesus.” Armstrong’s belief in the Second Commandment’s prohibition of images of God kept Wolverton from moving on to the New Testament and the story of Jesus. A stroke in 1974 left Wolverton unable to continue working entirely until his death in 1978. Looking at Wolverton’s body of religious work, you truly get the sense that he drew directly from his body of beliefs. Monte compares his father’s work to that of Hieronymus Bosch, and I agree. Wolverton’s mind set was distinctly that of the middle ages, yet he lived in modern times. In the 1500s, Woverton would have been right at home, whereas in the twentieth century he made the most of thinking and working outside of the mainstream. 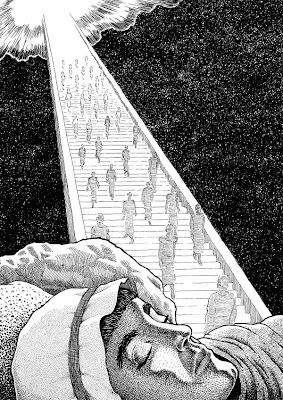 As much as the horrific and Bosch-esque in Wolverton’s art strikes you immediately, it’s also important to recognize the beauty of many of his visions, such as his imagining of Jacob’s dreaming of the “stairway to heaven” (above), also known as “Jacob’s Ladder.” In these beautiful images, Wolverton reminds me of another artistic outsider of profound faith—William Blake. Blake painted his unique vision of the Christian faith and emphasized the sublime over the terrible, whereas Wolverton emphasized the reverse, but at some point the two artists intersect in a span that is much too brief, yet touchingly beautiful to behold. When Wolverton draws the creation of Adam using over a thousand dots, we feel as if he’s is building up the first man atom by atom just as God himself did. The Wolverton Bible still has the ability to revolt and repulse viewers, but that is just one aspect of its overall ability to make these well-known stories seem new and, more importantly, inescapably human.

[Many thanks to Fantagraphics Books for providing me with a review copy of Basil Wolverton’s The Wolverton Bible: The Old Testament and Book of Revelation Through the Pen of Basil Wolverton and for the images from the book.]
Posted by Bob at 12:01 AM

Thanks for the review. I hold to the Christian faith, but have never been comfortable with the "sanitized" stories often presented to children (and many adults). I may need to pick up a copy of the book, to see if the story of Ehud (from the book of Judges) is illustrated.

I understand artistic license, but wish Wolverton had avoided interpreting the four horsemen as bombers. If trying to examine and understand the texts, an important precept is to understand that they cannot mean something that would not have been comprehensible by the original audience. I have no doubt that war contributes to pestilence and disease. I just know that such an illustration plays directly into some "end-times"-focused persons' preconceptions of what will comprise the "end of days".

I laugh at the Christian faith, so I am really pleased to see this comic-book interpretation of the comical stories in the Bible. Well done!

Wow, this went right over your head, didn't it, Anonymous?

Wow, that's great! It's wonderful that someone made this amazing blog. Please check this another wonderful site that defined "the prophet" for the modern era. This has made his journey unique: a journey that has taken his inspired message to schools and colleges, churches and synagogues, alleyways and prison cells.

Wow! This Blog is great. Just like Kim Clement. Kim Clement is an expression that has defined “the prophet” for the modern era. This has made his journey unique; a journey that has taken his inspired message to schools and colleges, churches and synagogues, alleyways and prison cells. Kim’s prophetic gift is a magnet that has drawn a broad audience, as he has whispered to kings and inspired prisoners, his path through life continues to be an exciting adventure.

Wow! This Blog is great. Just like Kim Clement. Kim Clement is an diverse and extemporaneous perspective has gained him notoriety that transcends culture, race and religion, placing him onto a world platform. He has performed at the Rose Bowl Stadium in California, Times Square in New York City, Mt. Carmel in Israel and even the steps of the U.S. Capitol in Washington D.C.

Thank you for introducing me to this artist.

I love this blog site! It helps me a lot. Just like KimClement. Please visit KimClement.com because there's a lot information about prophecy, prophet, and etc.

So brave. I'd laugh at your childish, very obvious defense mechanism stemming from a deep rooted fear of God... If it weren't so sad.